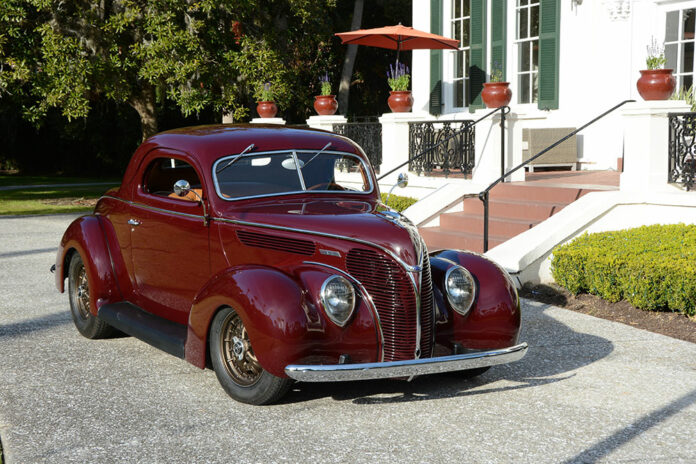 By Gerry Burger   –   Photography By the Author

Woody Smith is not new to traditional hot rods. He has been into cars since he was a kid growing up in Tucson, Arizona. He fondly remembers going to the local theater with his dad to watch the Indy 500, live, in black and white, on the big screen cheering on local hero Roger McCluskey. Yes, and while he left Tucson for Louisville, Kentucky, a long time ago, the racing and rodding seeds were sown. All this leading up to the 1938 Ford Coupe powered by a vintage Lincoln Zephyr V12 engine. 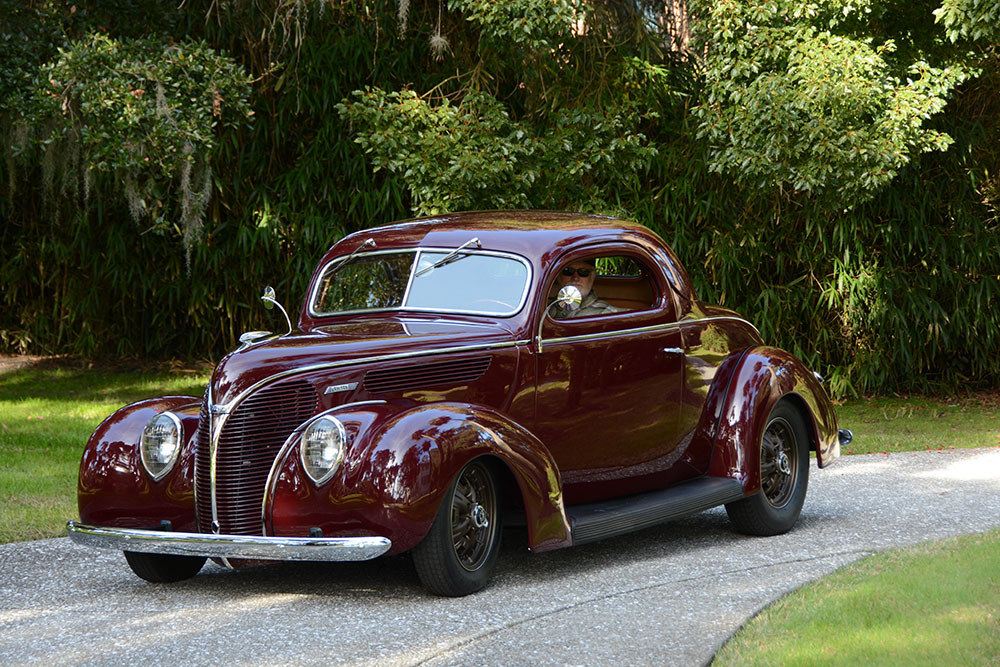 Fifteen years ago he built a 1928 Ford Roadster, fenderless, full belly pan, with a hopped-up Lincoln V12 between the ’rails. The roadster was a fun hot rod that provided miles of smiles and went on to win the Extreme Nostalgic Roadster Award at the Detroit Autorama in 2009. Not long after Detroit Woody began thinking of his next hot rod. This time it would have a roof, and it would be a roof like no other.

Read More: Above & Beyond a Simple Restoration: 1931 Ford Sedan

You see, he had this vision to build the Ford coupe never built, a 1938 Ford Three-window coupe. Ford stopped making Three-window coupes in 1936, yet the Lincoln Zephyr, while larger, had a beautifully flowing Three-window coupe. Woody wanted to combine the elegant sweeping lines of the Lincoln with the proportions of the smaller Ford body. To say this is a complex build would be an understatement and while Woody had the vision for his “Baby Zephyr,” he was wise enough to know his limitations. Being a retired aircraft mechanic, he knows his way around a hot rod, but this level of metal fabrication takes a master metal man. That’s where Randy Riall and his shop, Rods by Rowdy in Floyds Knob, Kentucky, came into play. Woody and Randy are longtime friends, so after several lengthy bench racing sessions Randy simply said, “You bring me the car and we’ll build it.”  The year was 2010. 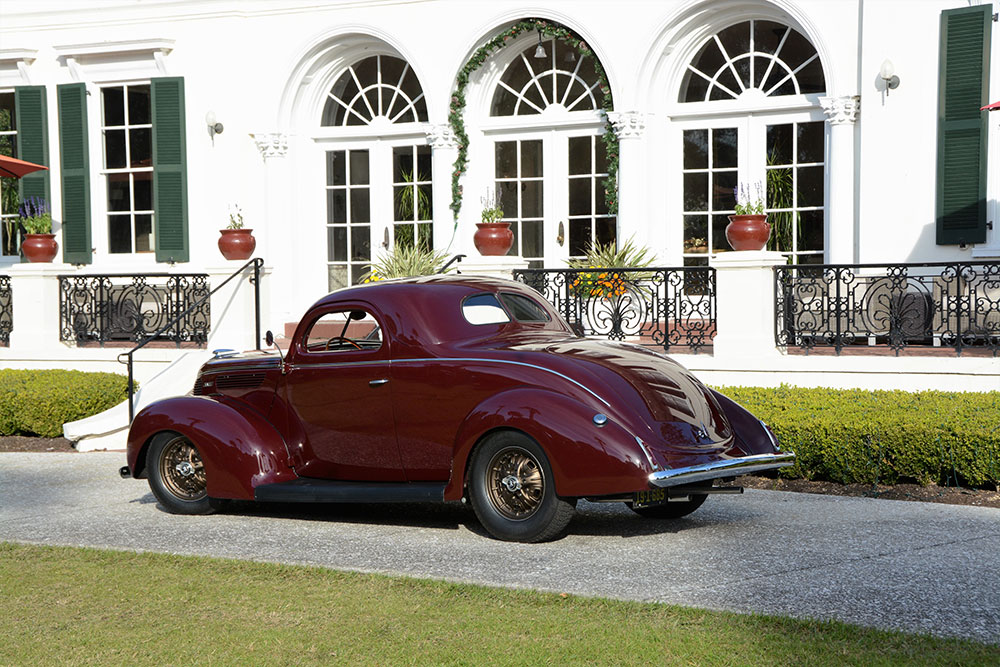 And so, the search was on for a 1938 Ford coupe. One was in Wichita, Kansas, dragged from the barn and trailered home. However, to create the proper profile and the desired door opening they would need a 1938 Ford Tudor Sedan parts car. One was in Green Bay, Wisconsin. Armed with two cars and a vision, it was time to begin cutting.

The mission of going from five to three windows involved proportions. Three-window doors of any year are typically larger than the doors from the same-year five-window. This keeps the window opening proportional to the roof and that’s where the Tudor sedan parts car comes into play. After cutting the tops off the sedan doors they were hung on the coupe body… yes, the hinges align perfectly. Ole Henry was known for keeping things standard, so all closed car cowls are the same. 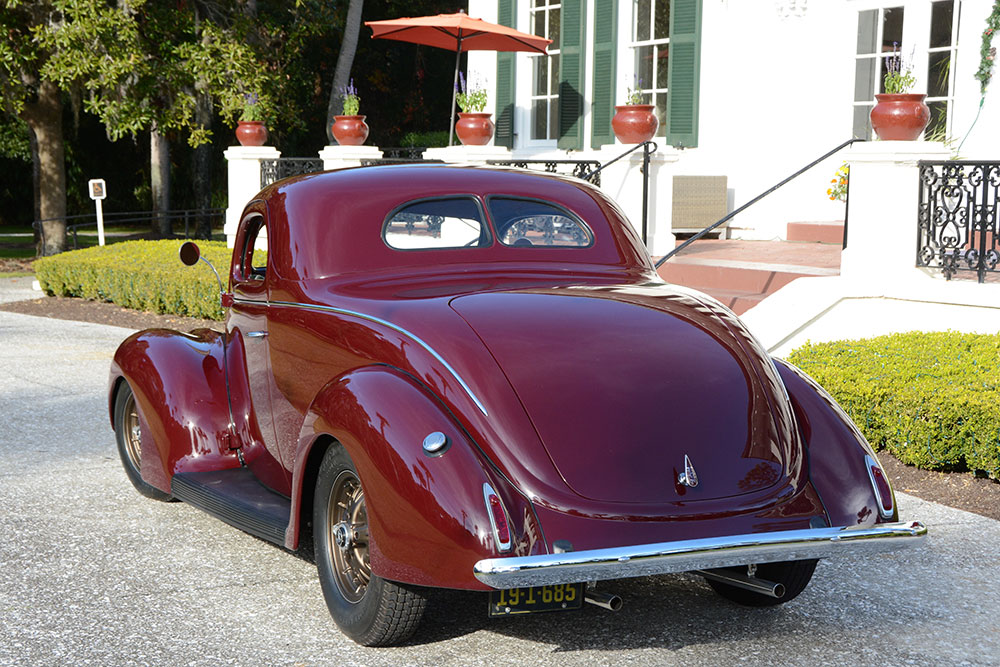 A quick history lesson for the 1938 Ford, while there was no three-window coupe, there was a Club Coupe. It had a stretched roof, larger quarter windows, and employed sedan doors, all to accommodate a rear seat. The roof line is very different from the regular coupe. However, did we mention Ford liked to keep things universal? Well, as it turns out, with the Tudor doors hung, they lined up perfectly with stampings in the floor pan for the B-pillar. Yes, the same floor was used for both coupes (and possibly the Tudor sedan). This made locating the B-pillar straight-forward and assured the B-pillars would be in the exact same location on both sides. Now it was a matter of locating the rear half of the body to align with the location of the new B-pillar, followed by chopping the top 3 inches and reshaping the rear contours of the roof.

With the back half of the body reattached and the roof lowered it was time to shape the top of the doors. That was handled by using pieces from the coupe door tops and the Tudor sedan door tops to form the perfect window shape. Maintaining the stock-appearing rain gutters, the factory seam where the roof attaches to the body and the original side trim makes this phantom coupe entirely believable.  Of course, this is a gross oversimplification of the process, months of careful cutting, fitting, and visualizing went into forming this perfect profile.

The remainder of the body remains as Ford built it. Sure, a keen eye will notice the Lincoln Zephyr trunk handle and the 1941 Studebaker tail lights, but the body remains largely as Henry built it… with the exception of the V12 emblem on the hood. Now what’s that about?

Pop the hood and nestled between the original frame rails is a 1941 Lincoln V12. Bored 0.010 it displaces 292 ci. The engine was balanced and topped off with a set of finned aluminum heads from H&H Flatheads. The vintage triple carb intake manifold is a swap meet item with a trio of Stromberg 97 carbs from Vintage Speed in Vero Beach, Florida. A Powermaster alternator provides the required 12 V. Miles Machine in Louisville, Kentucky, handled the machine work. Randy Riall fabricated the 1-1/2-inch custom headers and exhaust system. 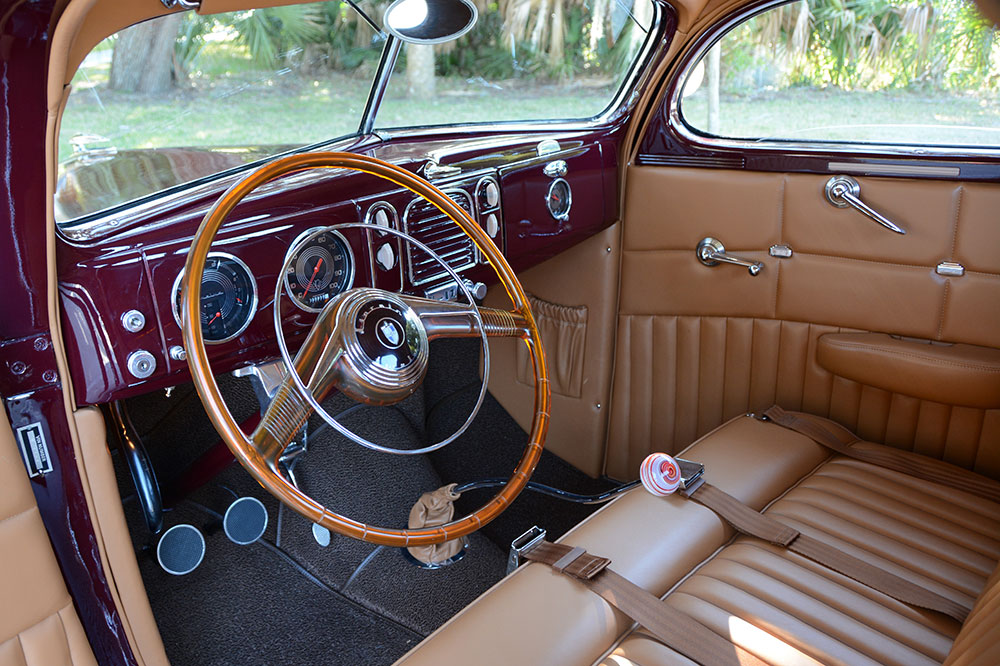 With the body profile and powerplant completed it was time to build a chassis with the same vintage flavor. The original 1938 frame now rides on a 4-inch dropped Super Bell Axle while out back a Winters quick-change rear-end is suspended via an elliptical spring and tube shocks. The open driveshaft connects to a 1940 Ford transmission. Lincoln drum brakes are found on all four corners. Rods by Rowdy handled the chassis work. Rolling stock consists of 6×15 one-off custom wheels by Mike Curtis at Curtis Speed. 7.00R16 Coker Excelsior tires mount on all corners. Remember Woody’s love of Indy racing? Well, he had Curtis Speed build the wheels to mirror the Halibrand wheels of a vintage IndyCar. 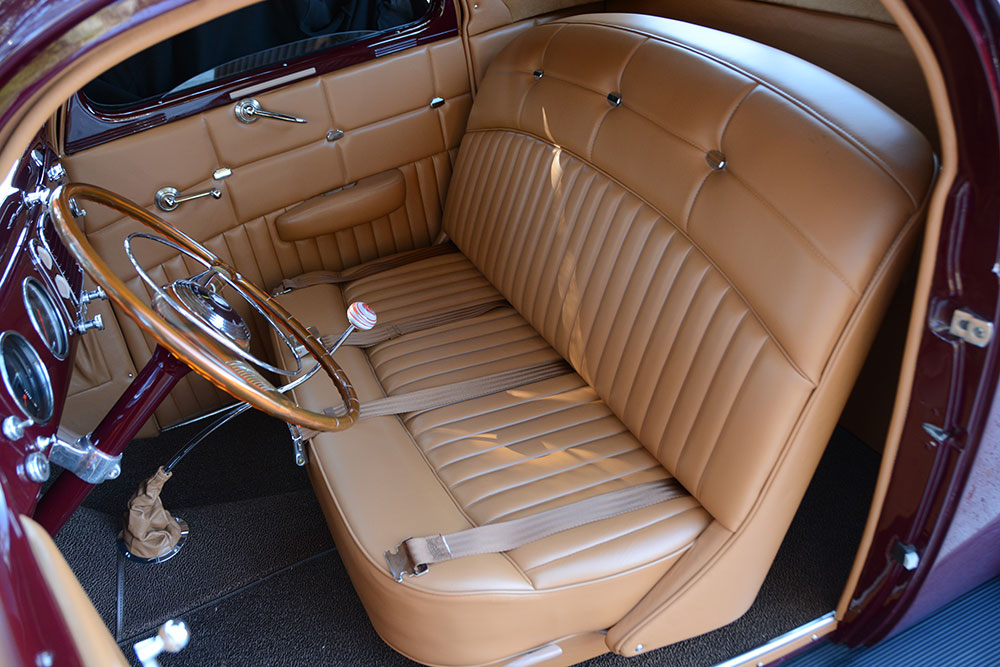 The final project was the interior. The first thing to grab your eye is the 1941 Lincoln steering wheel; it is simply stunning. Spanish leather covers the seat in a custom rolled and pleated design. Custom aluminum buttons add a touch of detail to the re-arched seats and door panels. Schrecks Upholstery in Deland, Florida, handled the stitchwork. The dashboard is filled with owner-designed custom gauges by Classic Instruments carrying a tasteful V12 logo.

Woody’s coupe has a presence about it that draws you in for a closer look. The coupe is well received wherever it goes, “real car guys” immediately recognize this is a one-off custom vehicle, while others mistake it for a flawlessly restored original body, and that may be the ultimate compliment to the craftsmen responsible for reshaping this coupe. Combining hot rod flavor with baby Lincoln Zephyr influence lends a simple elegance to the car. Driving the car is pure hot rod, the V12 is silky smooth and the sound of the exhaust blends nicely with the whine of the Winters quick-change rear-end. Speaking of whine, maybe it was the deep burgundy color that prompted us to investigate just what makes a fine wine. We discovered this definition, “a fine wine will always boast a good balance, length, and complexity.” That description fits this coupe perfectly, but perhaps Woody Smith said it best: “If your build brings a smile to your face every time you walk past it, then it’s a job well done.”  MR