By Brian Brennan   –   Photography By the Author

It’s been 40 years that the Shades of the Past Car Club has presented the Hot Rod Roundup. This year was its 39th (lost a year due to COVID-19) and the last one. It was one of the premier events in the South—many would say the country. While the Hot Rod Roundup was hosted this year and for the past dozen years at Dollywood’s Splash Country in Pigeon Forge, Tennessee, this “roundup” has seen various locations as its home, always growing and always getting better.

The needs of Dollywood for expansion and the needs of the club having changed led to a match of “needs” and the Shades of the Past Car Club has opted to bring to close a well-documented and experienced chapter of American hot rodding. Known for its many unique features, such as a yearly giveaway hot rod, the 50/50 drawing that oftentimes led to the winner taking home $20,000-plus, one of the pre-registered entrants having their name pulled from the drum and being gifted another $10,000, and countless charities that have benefitted over the years. Of course, all of this is great but the attending rodders have always been privileged to enjoy an event that recognizes numerous categories of winners with awards for each to take home. While the name of the event is the Hot Rod Roundup it is repeatedly called by its nickname–“Shades.”

Shades had come to be recognized for its Top 25. To be recognized as one of the 25 meant you had to build an outstanding hot rod. Repeatedly, as I would travel the country, I would speak with rodders who would tell me about this or that hot rod and how cool it is. Somewhere in the conversation the storyteller would bring up it was a past Top 25 winner and that’s all that would need to be said. Everyone knew you meant that it had earned a Top 25 from the Hot Rod Roundup presented by the Shades of the Past Car Club. It’s always been recognized that should you reap a Top 25 you truly had a hot rod that was worthy and could “stand tall” anywhere in the country at any competition.

The Last Roundup
It’s the weekend after Labor Day so there’s sure to be rodders from all over the South and a growing number from other far away cities and towns coming to Shades. There was lots of talk of “rain out” this year but the two-day event proved to be lucky. Friday, while overcast, was dry and there was plenty to do and see. As has been the case for years, the two-day event begins on a Friday and wraps up on a Saturday. Saturday did experience a light rain up till noon when the “liquid” stopped, and a very pleasant Saturday afternoon followed.

As in recent history the Hot Rod Roundup has been the home for the Triple Crown of Rodding (Best Street Rod, Best Street Machine, and Best Street Cruiser) sponsored by Modern Rodding magazine. The truly amazing trophies were delivered to the grounds by Steve Tracy of Advanced Plating, one of the founding companies of the award. They are also responsible for the plating, polishing, and all the assembly. The stunning wooden crates that are custom made to hold the trophies are once again works of art in themselves. Many thanks to John McLeod of Classic Instruments for building the custom wooden crates, as he has every year. Rick Love of Vintage Air is also instrumental in making all of this happen and he and Vintage Air once again stepped up. Of course we wouldn’t be anywhere if it weren’t for Bobby Alloway and his judging staff who picks all the award winners. Clearly a great deal of time is spent on the Triple Crown of Rodding finalists. The “word is out” and significant cars from other prominent shows from around the country are appearing and vying for one of the three Triple Crown awards.

As was the custom of Dollywood’s Splash Country the award winners were gathered around the waterpark (drained for the winter) and on display all day Saturday. Aside from the Top 25, the Magnificent 7 and the Triple Crown winners are there as well as numerous other award winners.

Of course, the big prize the attending rodders are waiting for is to see who goes home with the ’32 Ford highboy roadster built at Alloway’s Hot Rod Shop. This year it was Tim Thrasher of South Carolina whose entry number (#955) was selected. He “wedged” his body behind the wheel and drove the highboy roadster home. There is also the winner of the 50/50 giveaway. This year the prize was based on $53,720, with Steve Owen taking home $26,860. The winner of the early pre-registered drawing was Rodney Edwards (#133) who took home his $10,000 prize. In the 2021-2022 time frame the Shades club has given funds to 22 separate charities. Now that’s giving back.

Triple Crown of Rodding
Aside from the most amazing trophies that are given to each of the three category winners there is an added benefit. For the first time these winners received an automatic invitation to the Barrett-Jackson Cup held at the Barrett-Jackson Auction, January 21-29, 2023, in Scottsdale, Arizona. There are only 50 vehicles accepted for the competition and each year the Triple Crown winners will receive automatic invites. Very cool. Here’s a chance to not only be in competition for another of the industry’s top awards but to also have your car featured on television during the show.

To win the Triple Crown your hot rod must first work its way through the awards gauntlet. Your ride must make the Top 25, then the Magnificent 7, and then from this grouping the Triple Crown winners are selected.

Out of this grouping the Triple Crown winners for 2022 are Sonny Freeman and his ’32 Ford highboy coupe taking home the Best Street Rod, Best Street Cruiser to Dan Duffy with his ’61 Chevy Impala, and Best Street Machine went to the ’69 Firebird belonging to Brad Sather.

A Bit of History

The club came about after a meeting Joe Bailey, Don Hutsell, Tom Clark, J.R. Carnes, and Carl Holmes had in 1976. It was at this meeting that Bailey offered up the name “Shades of the Past” and the others agreed.

It’s now 1981 and the Shades club held their first and second event in Maryville, Tennessee. I remember Dan Draper, the club’s treasurer and rod run chairman, once telling me that the current day rod run came about as the club tried to resurrect the old Gatlinburg event back in 1983. They expected 300-400 cars … 1,000 showed up! It was here that the genesis of the Top 25 was born. The Top 15 were chosen.

In 1993 the club leased a 52-acre pasture that would be the home for the next 17 years. The pasture did have its difficulties, with mud being a big bugaboo after any rain. It was in 2002 that cars up to 1964 were welcomed, by 2006 the event was opened to pre-’73 cars and trucks, and by 2007 the event did grow to 3,291 entrants. The last move occurred in 2010 when Dollywood’s Splash Country became the final home for the Hot Rod Roundup, and what a home it proved to be.

A Look into the Future

Well, life does go in circles as now it’s time to end one chapter and begin another. Bobby Alloway will be hosting the Triple Crown of Rodding event going forward. In The Garage Media (Modern Rodding) will continue to cover the Triple Crown of Rodding and much more. To this illustrious gathering there will also be multiple super awards given to early (’48-65) and late (’66-93) classic trucks. There will also be other specialty awards and, of course, there will be 50/50 drawings; early word says there may also be a giveaway vehicle of some sort and, of course, local charities will benefit. As you’ve done for the past you still have a place to go the weekend after Labor Day, as all of us have done since 1987.

My mom used to tell me, “In order to enjoy a great sunrise you have to experience a great sunset.” The Shades Car Club has put to rest a great event but now it’s time to experience a new beginning. Stay tuned as a new Triple Crown of Rodding event held by Alloway in conjunction with Modern Rodding will be coming with the next sunrise. MR 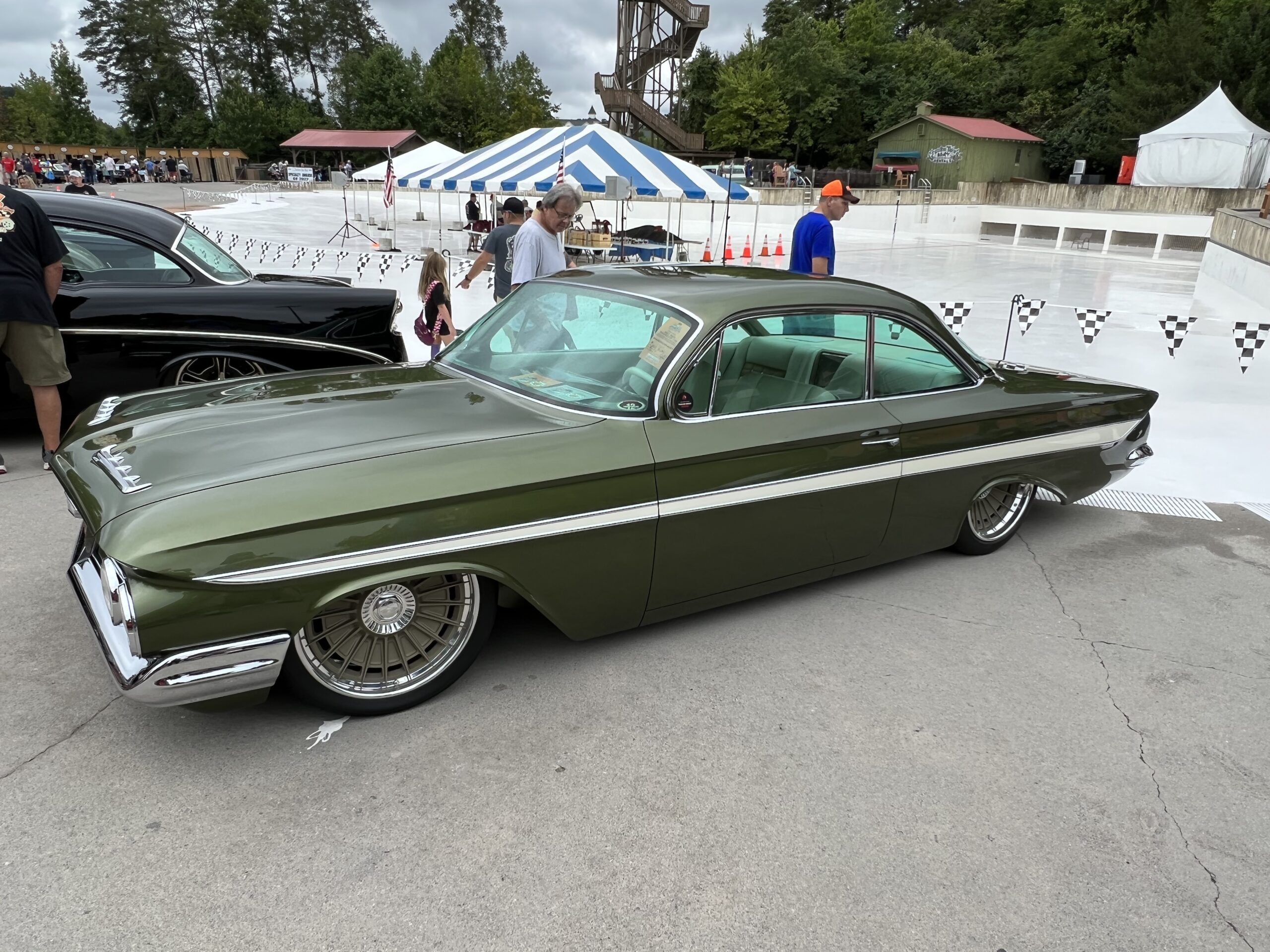 Winner of the Best Street Cruiser portion of the Triple Crown of Rodding went to this ’61 Impala belonging to Dan Duffy of Georgia. It also took home a Top 25 and a Magnificent 7 as well as an automatic entry into the Barrett-Jackson Cup. 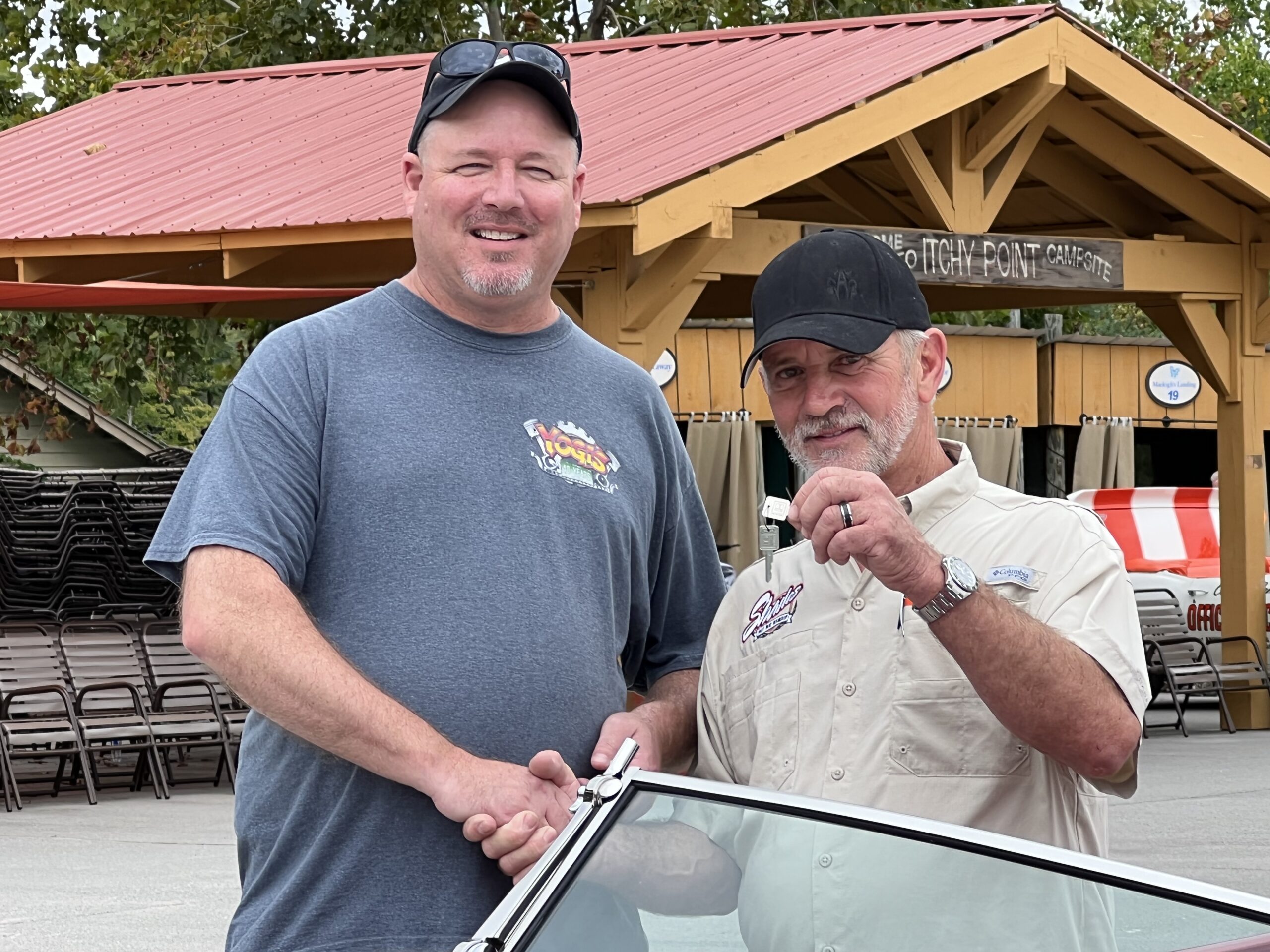