By Joe Greeves – Photography By the Author

As a retired custom car and truck builder, Dale Dinse has learned building your own ride is special. For the last several decades he has created more than a hundred personalized rides for customers, with each new vehicle honing his skill for the next. While retirement has been great fun, it wasn’t long before those creative urges reasserted themselves and Dale began looking for a new project, which turned out to be a Ford, the classic Ford shoebox, in the shape of a ’50 Ford convertible that’s resided in the family since the early ’60s. 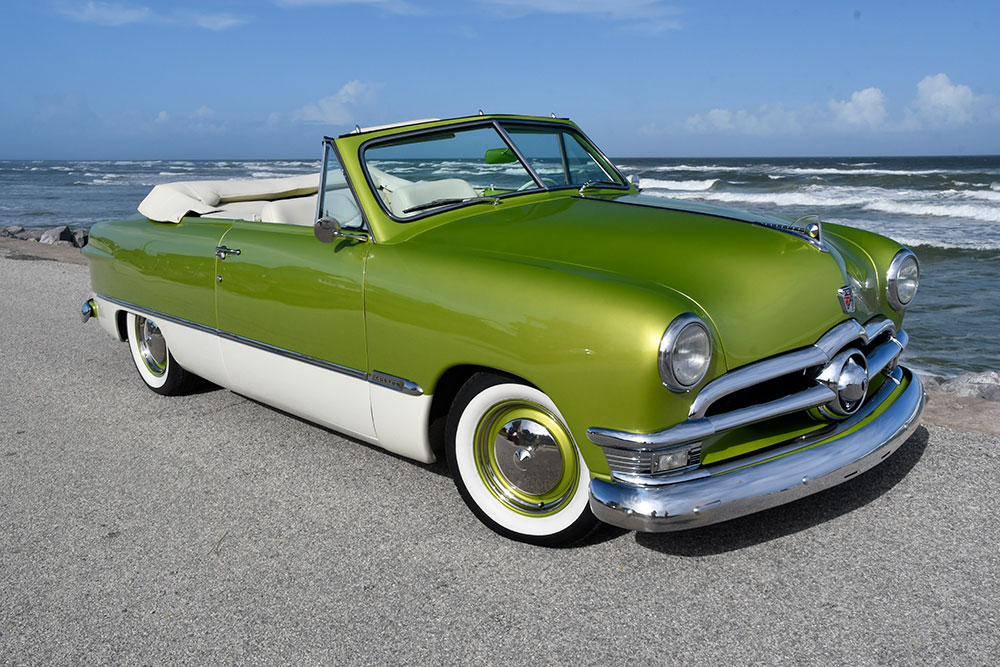 Dale finally acquired the car from his brother-in-law in the Spring of 2011. No longer used, the old family favorite had been stored in the garage for 38 years. Once in Dale’s possession, the car sat for another year while he established an elaborate plan for every inch of the new acquisition.

The day may come when builders run out of custom ideas to refine the classic lines of a shoebox Ford but for Dale ideas were already overflowing. Since the Blue Oval is already a retro fashion statement, his approach was to enhance rather than reinvent. As a result, virtually all the car’s original lines remain intact. In true restomod fashion. However, major upgrades under the vintage sheet metal were comprehensive, beginning with the suspension and powertrain. 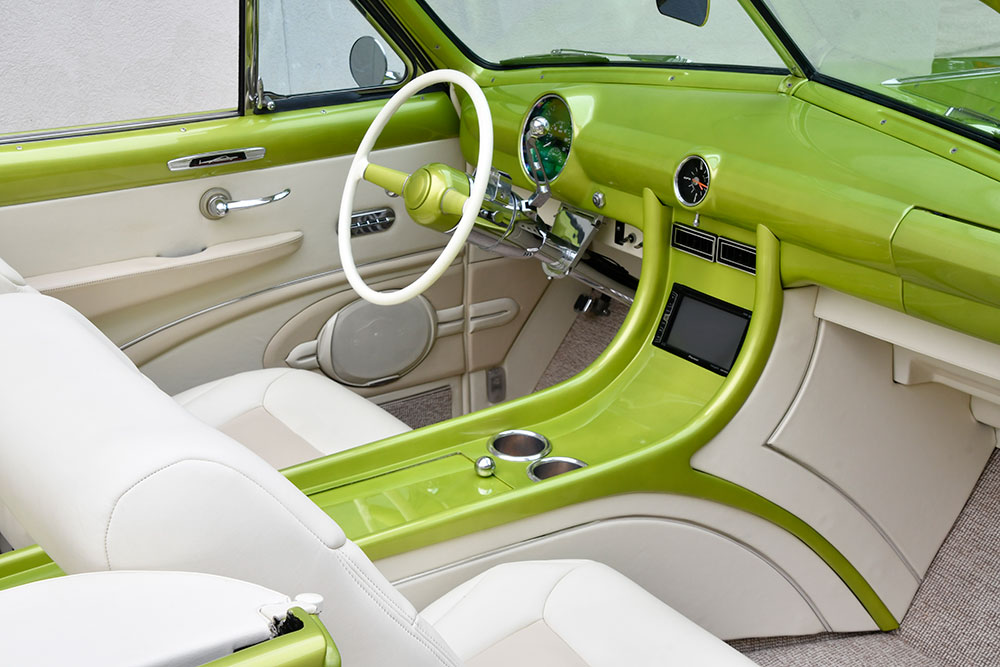 Working in the family garage, Dale separated the body from the chassis, putting each on a rotisserie for ease of access. Seeking the optimum blend of comfort and handling, Dale’s goal for the chassis was an educated combination of old and new. After sandblasting the frame and modifying the cross-member for a larger transmission, he coated everything with POR-15 preservative. To achieve a modern ride, the original Ford horse and buggy suspension was scrapped, replaced instead with a Stage III fatman fab’s stub for the frontend. The package included new 11-inch disc brakes, coilovers, tubular control arms, drop spindles, and Thunderbird rack-and-pinion steering. A Ford 8-inch rear end was equipped with 3.55 gears and sports Eaton leaf springs, shocks, an electric emergency brake from Speedway Motors, and 11-inch GM disc brakes. The chassis rolls on stock 15-inch stock Ford rims fitted with Diamondback wide whitewall tires.

Since adventure always needs chasing, a power plant strong enough to trigger a dopamine dump was essential. Initial thoughts led to rebuilding the original Flathead V8 (expensive and you still have a Flathead), followed by a 5.0 Coyote crate engine (really expensive!). The final decision came with the help of a friend, who had a lightly used and priced right ’04 LS1 engine V8 from a Pontiac GTO, paired with a 4L60E automatic transmission. The 370hp motor was more than quick enough in stock form, ensuring that the vintage Ford could chase adventure with the best of them. Style points also figured in with Dale confiding, “I especially liked those showy valve covers!” 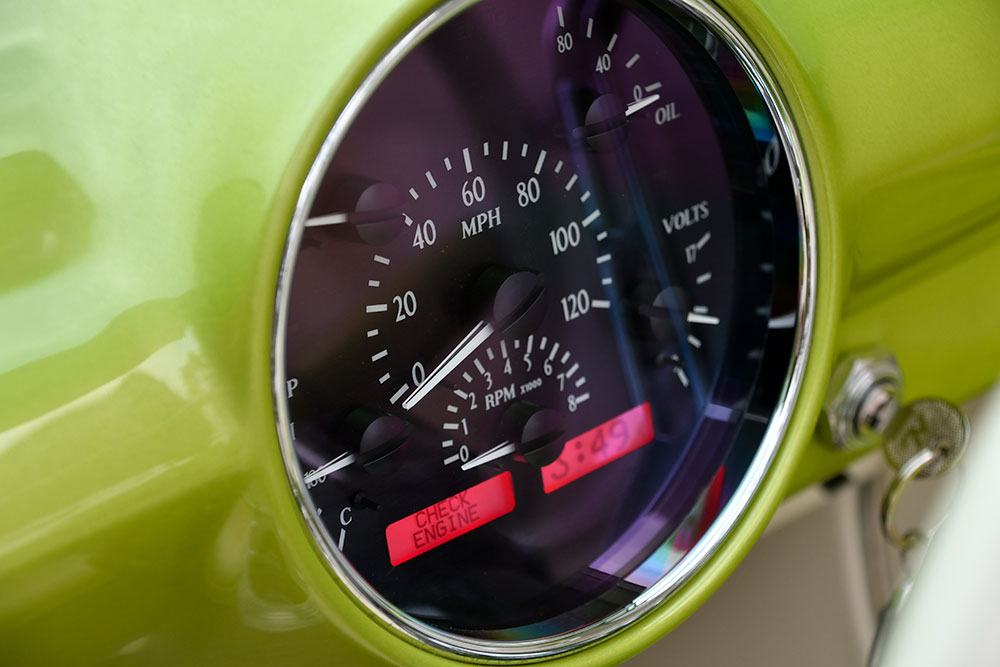 Prior to installation, countless hours were spent reconfiguring the engine room with a smooth firewall, custom inner fender panels, and a custom radiator support to accommodate the Brice Thomas aluminum radiator with two-speed, 17-inch electric fans. The eye-catching Spectre air box with a Plexiglas insert delivers cool outside air to the motor. Both the engine room and the engine were color-matched to the exterior. The new LS1 engine will set you back quickly into your seat while the twin Flowmaster mufflers add a delightful auditory rumble.

Once the chassis and powertrain were complete, Dale began work on the body, amazingly rust-free, probably because of its years of careful storage. New lower front fender panels and rockers were the only areas needing replacement. All the seams were sealed and 2 gallons of truck bed liner applied to the underside. The classic grille and the smooth bumpers were re-chromed and he retained the slim piece of chrome from the wheel well to the rear bumper. Dale does his own painting, deciding on that bold color choice after spotting a little Ford Fiesta at an intersection. He tracked down the color code and after many hours of prepping the body, sprayed the PPG Orchid Green, accented with Vanilla Shake. Except for the subtly lowered stance, the exterior is stock. 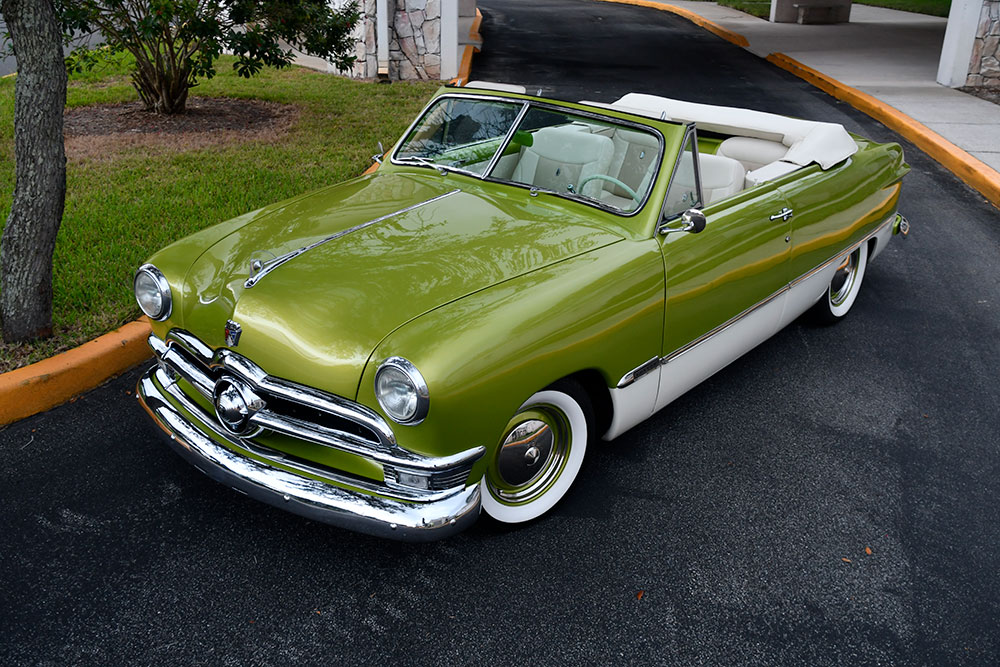 There is nothing stock about the custom interior, however, boasting premium accommodations that swaddle occupants in yards of cream and beige vinyl.

Driver and front seat passenger relax in six-way power and heated car seats from a Kia Amanti, engineered to pivot up for ease of entry into the pair of custom rear seats. They were created by Don Allen of Allen’s Upholstery who also did the top. It’s the waterfall center console, however, that catches everyone’s eye, an idea that Dale always wanted to try. Using a combination of round and flattened steel tubing, he created a body-colored, center console that separates the seats and flows from front to rear. All the knobs were removed from the dash, now fitted with a factory Ford clock and a Dakota Digital gauge package that supplants the original Ford instruments. The center console holds vents for the Southern Air AC, the Pioneer MixTrax touch-screen for the stereo, cup holders, and controls for the power windows. The sliding center compartment conceals the wiper and AC controls along with USB ports. Dale fabricated his own elegant door panels, incorporating 6×9 component sets up front with 6.5-inch versions in the rear. Keeping the driver in close touch is a Southern Rods ’40 Ford steering wheel on a polished Ididit steering column teamed up with custom Lokar pedals. A modern backup camera connects to the touch-screen, making easy work for those tight parking spaces. German wool square-weave carpet is under foot and all the lights on the car, inside and out, were replaced with LEDs. 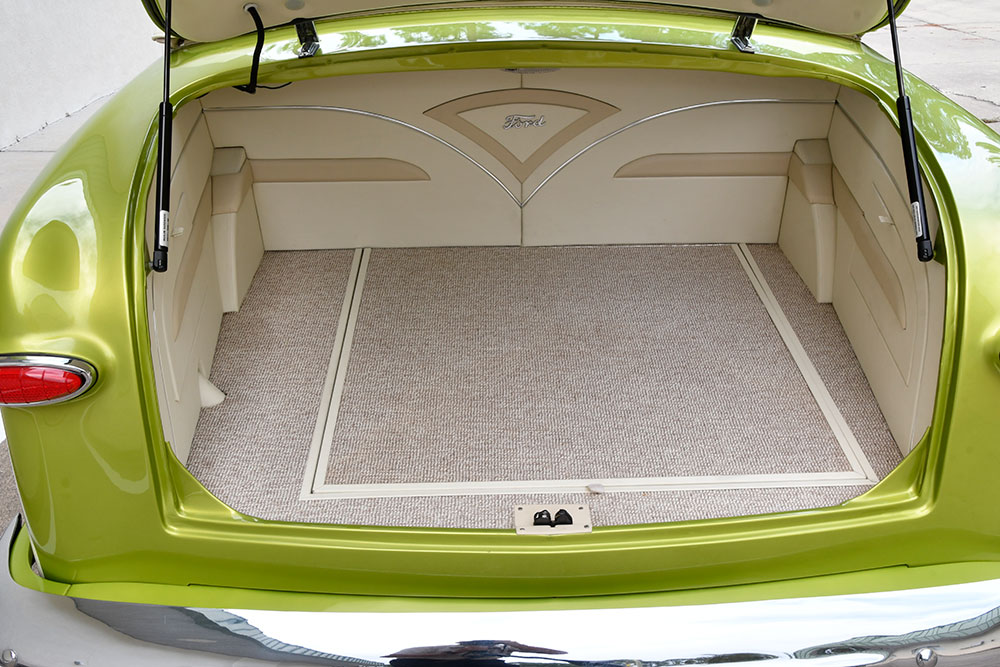 Moving to the trunk, the same combination of vinyl shades and custom paneling turned it into a showpiece that matches the interior. It’s sized right for a weekend getaway with just a little extra space to hold a trophy from the latest car show. Hidden storage areas hold cleaning supplies and other essentials.

The car took 26 months to build with Dale averaging five days a week. The goal was to blend modern technology with classic hot rod looks to create the best of both worlds. Now that its 38-year siesta is complete, the family Ford is back on the road, quicker and cooler than ever. Dale smiles when he says, “It’s a fun car to drive with the top down, enjoying all the modern comforts the car has to offer.” He and his wife, Jackie, go everywhere in the vintage Ford, secure in the knowledge that modern engineering will always get them out and back in style. MR