A well thought out hot rod build is much like a fine wine: It gets better with time. To rush to completion will only lead to disappointment. Use wisely the obligatory time and the results will yield the look and the “taste” of success.

A quick backstory tells us this 1932 Ford 3-Window Highboy Coupe originally gained traction through the ideas of Troy Ladd of Hollywood Hot Rods (HHR) fame and expressed through the crisp and well-detailed artwork of Eric Black of e. Black Design Co. This idea gained its impetus through a magazine story put forth by Tim Bernsau of Rod & Custom many years back. The thought was to take an American traditional hot rod and add European sports car design elements. Over the course of time the project went from a collaboration of Ladd and Black to a hot rodder with the foresight and wherewithal to make sure the build would come to fruition—Pat Gauntt. And so went Pat’s 1932 Ford 3-Window Highboy Coupe built at HHR in Burbank, California. Although the original design concept with Ladd and Black began in 2007, the actual physical build took about six years, making its debut at this year’s Grand National Roadster Show. It caught a lot of people’s attention, especially the judges for the Al Slonaker Memorial Award presented by ARP, as they awarded the coveted trophy to this 1932 Ford 3-Window Highboy Coupe. 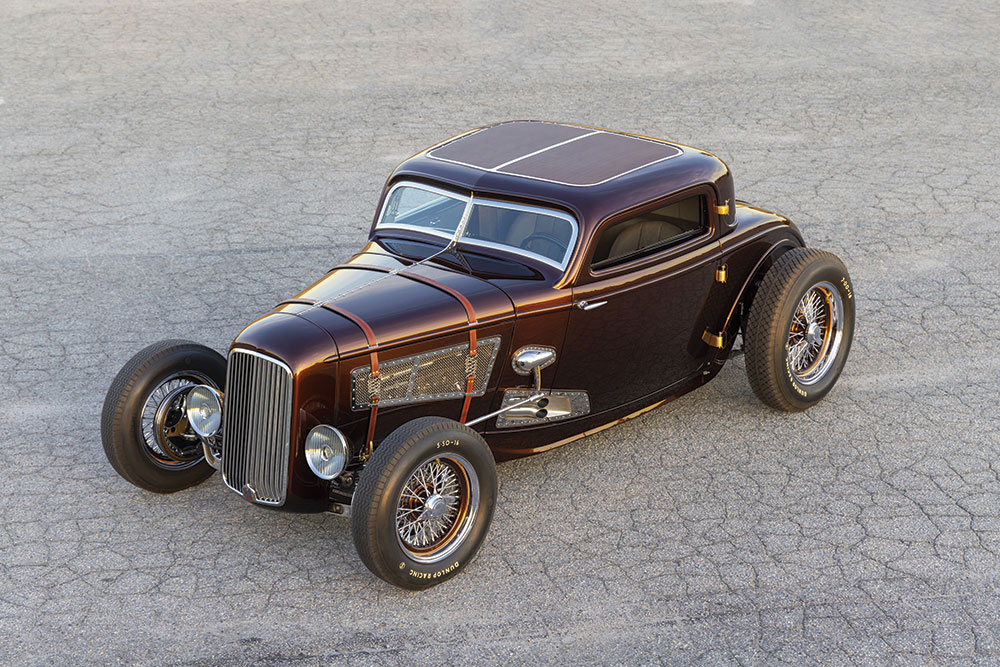 Also, Check Out: 1932 Ford 5-Window Coupe With a Vintage Look

To the eye of any hot rodder you can see immediately the top was chopped and the body was sectioned in two places with the wheel arches relocated. The chop features a cut of 5-1/4 inches in the front and 4-1/2 inches in the rear. The windshield rests within sloped reward A-pillars a noticeable 18 degrees while the windshield itself is split into a V-configuration. The “split” configuration can also be seen in the rear window. From here the cowl was reshaped via a sweeping radius that can be seen through the cowl top and firewall. From here note that the rear decklid was reduced and relocated.

Examples of individual pieces of Hollywood Hot Rods craftsmanship can also be seen in the rear roll pan, the aluminum belly pans, the handmade grille and insert, and a fabricated lengthened hood. The bodywork was performed at Mick’s Paint under the watchful eye of Mick Jenkins. He also oversaw the application of the House of Kolor brown color throughout. (To learn “the rest of the story” on the bodywork and its modifications check out the story on page 62 in this issue by Ron Covell.)

The vintage V8 power plant is based on machine work by Burbank Speed yielding a Cadillac 331 engine. The block was fitted with custom 10:1 high compression Ross Racing Pistons and 390 iron cylinder heads were then positioned. From here the heads were capped with chrome and painted detailed Cadillac valve covers. Next up the custom valvetrain features an Isky 270-HL hydraulic cam (0.510-inch lift) with an effective power range of 2,000-6,000 rpm. Feeding the combustion chambers is an Offenhauser intake with a pair of Stromberg 97 carburetors. Bringing fire to the fuel load is a vintage-appearing PerTronix distributor filled with electronic innards, a Flame-Thrower coil, and vintage cloth-style plug wires. Exiting the spent gasses are handmade highly polished custom stainless steel headers with more stainless tubing used to make up the exhaust system. The Bugatti-inspired exhaust is highly identifiable as it exits through the cowl. You can see the heat shields and exhaust pipes themselves as they are mounted on the cowl and doors of the three-window coupe. As a sidelight: The exhaust can go from “closed” to “open” while standing still or on the fly operated via a dash-mounted hidden valve.

Other engine accessories include a modified stock water pump, a Down to Earth alternator, and a pair of 6V Optima batteries wired in series. There was also a need for a full complement of brackets and pulleys, which were designed and fabricated by HHR. The 300-plus horsepower V8 backs up to a BorgWarner manual 5-speed transmission with a very mechanical and race car–inspired rail shifter, more HHR handiwork that sits atop the leather-covered transmission tunnel. 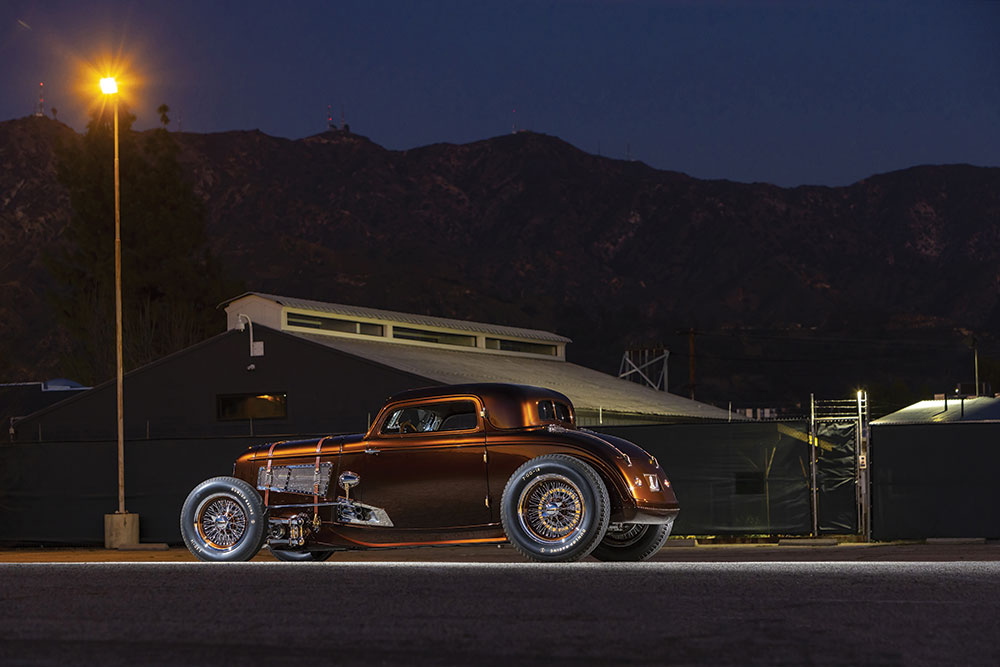 From here the power is ushered back to a Speedway Engineering quick-change, featuring a combo of paint and polish that runs a street-friendly 4.11 ratio. The quick-change is located by quarter elliptical springs with a yoke-appearing center-mounted wishbone locator.

The HHR custom frame features radiused I-beam crossmember, double-radiused dimpled lightening holes throughout, and radiused inner rails with dimpled recesses. The front axle is a custom I-beam fabricated at HHR. The steering is based on vintage side steering, with more race car flair. The front and rear suspension is unique, it features a double quarter-elliptical spring with fully adjustable ride height. The rear has a pocketed single-elliptical spring with upper wishbone tracking arm. The front and rear suspension also employ Telecontrol shocks. 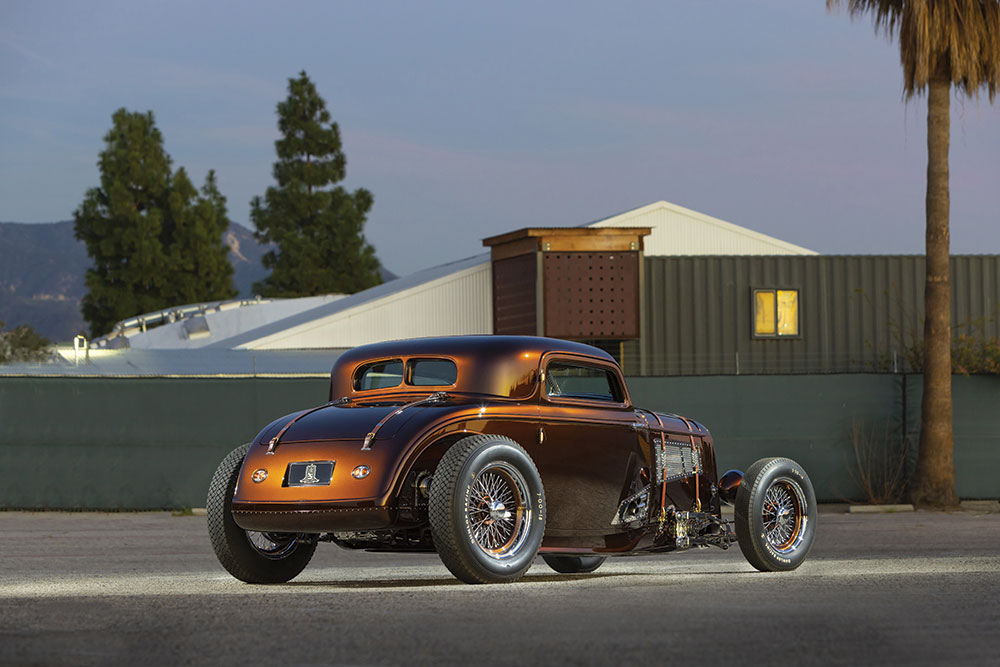 A word on the unique shock package. It is based on the remote-controlled Andre Hydro-Telecontrol friction shocks that are operated through an oil charge. The complete Telecontrol system consists of four friction shocks with two regulators (one each for the front and the rear). From here there are two indicator gauges and two reservoir filling pumps all linked together by copper tubing. These two gauges and reservoir pumps are mounted to the top of the leather-covered transmission tunnel. This makes for additional mechanical offerings to view when looking at the interior.

Not to be outdone, the brakes are also unique, in fact, one of a kind by HHR, and they  feature a “skeleton” appearance. Should you get the chance to see the car in person, look closely at the brakes. There are no backing plates. Anywhere. HHR fabricated their own floating brake shoe system where all the inner brake components are exposed to the elements. The philosophy is back in the day these air-cooled brakes would run cooler and stand up to the rigors of racing. 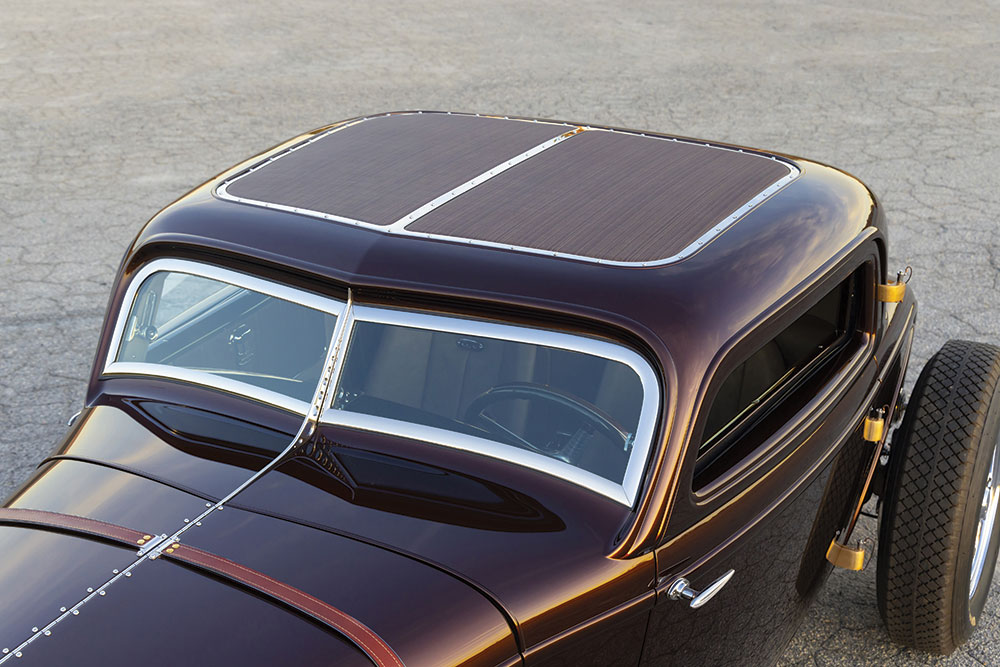 Wheels and tires can make or break the look of any hot rod. We have to say that the combo is spot-on for this Slonaker winning coupe. The custom wire wheels use the European small hub spline centers, 16- and 18-inch. The wheels were painted and then pinstriped before lacing so the color is clearly visible behind the spokes. The 16×5 and the 18×6 wires were then enveloped with Dunlop Racing tires, measuring 5.50×16 and 7.00×18.

The interior is truly inspirational and offers what one might find in a European sports car. The suspension is controlled from within the cockpit. For instance, the friction shocks are controlled by pressurized oil, which is controlled by valves positioned near the gear shift lever. There are gauges associated with this function so that the driver can check pressures on the fly and, hence, adjust dampening action. There is more European flair, something that would have been found in a race car of the ’30s. High tech for the day. Other interior and mechanical-inspired details are found in the rail shifter system, “skeleton” handbrake lever, suspension control components, and a roof panel switch. 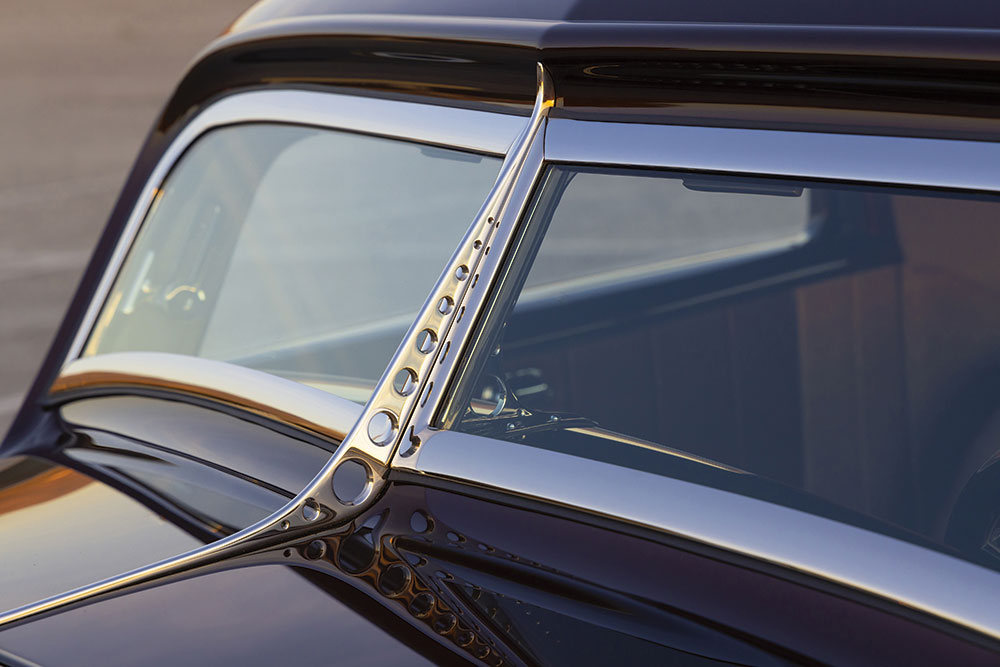 More on the interior by Mark Lopez of Elegance Auto Interiors. There is a combination of light and dark brown leather used throughout with special attention to the transmission tunnel covered in the dark brown. The HHR custom-made bomber bucket seats are covered in a light brown leather. The variegated carpeting is based on a German weave in a light and dark brown while the light brown velour headliner was also put into place by Elegance. There is also a switch panel located in the headliner, again more HHR handiwork, that controls the exhaust (open/close), ignition, start, lights, and turn signals. The dashboard is a highly modified ’32 panel that’s outfitted with vintage gauges (origin unknown) that were rebuilt by Redline Gauge Works. Working with the dash is the HHR custom steering column that links the vintage cowl (side steering) and is topped with a J.B. Donaldson four-spoke wooden steering wheel. To bring it all together a Centech wiring harness was placed by HHR. 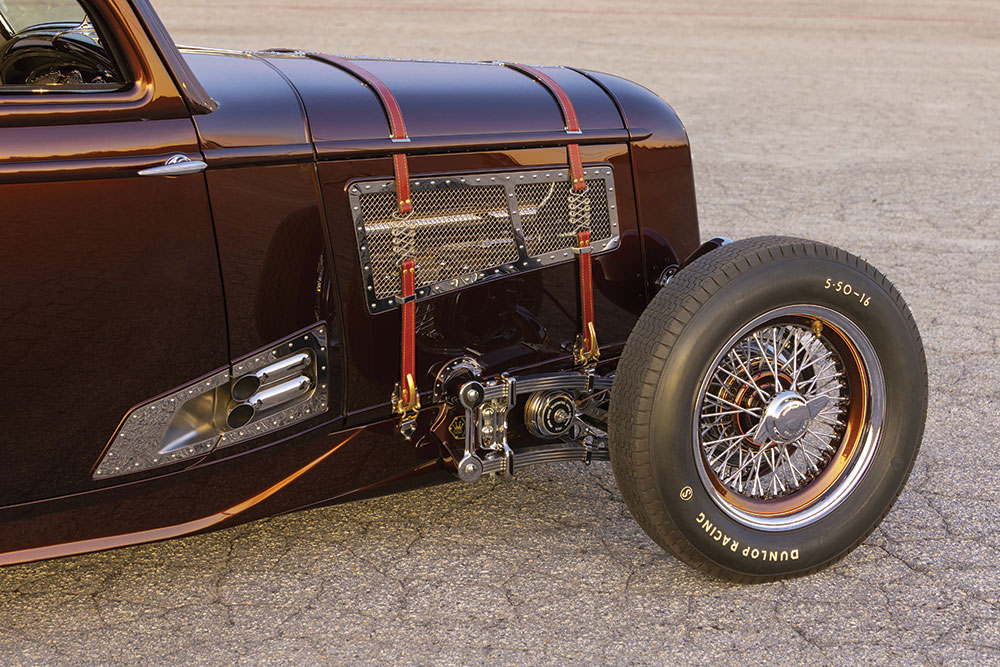 We’ve all heard “It takes a village to raise a child.” Well, it takes the car community to build an award-winning hot rod. No question HHR is given the credit for the build, but Ladd will acknowledge others were critical: e. Black Design Co., Mick’s Paint, Elegance Auto Interiors, Custom Chrome Plating, V&M Metal Polishing, Alumicraft Street Rod Grilles, Alex of Malex Pinstriping, Wheelsmith, Tom Utley (Kingtutley), and, as Ladd would say, “the person we failed to mention.” Aside from taking home the GNRS Al Slonaker award presented by ARP it has also taken home (at the time of this writing) the following awards: While attending the Goodguys Del Mar event it was awarded the 2022 Meguiar’s Street Rod D’ Elegance award followed shortly by the Spokane Speed and Custom Show and winning the Spokane Cup Award sponsored by ARP. (Editor’s Note: Right now we are lobbying to have this amazing coupe brought back to the Shades of the Past Hot Rod Roundup Triple Crown of Rodding competition. As many rodders as possible need to see this one-of-a-kind build. —B.B.) MR