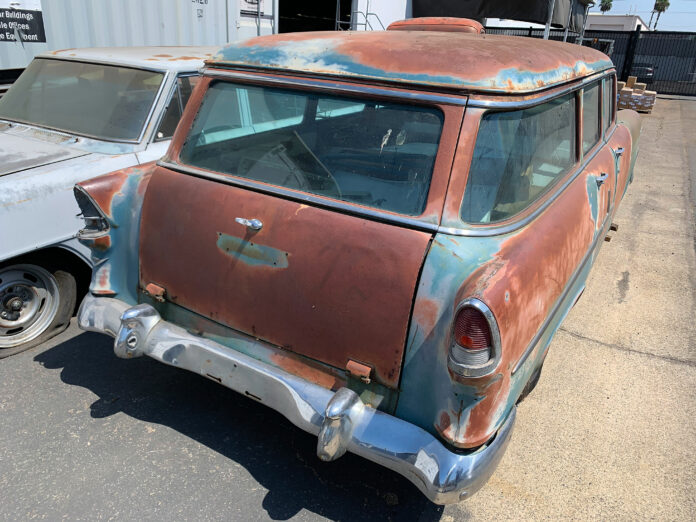 Replacing and Repairing All Things Tailgate on a Tri-Five Chevy

When the tailgate on your station wagon is old enough to collect social security it’s a good bet it’s time to repair and replace where needed. Around the Modern Rodding offices our “shop truck” is a ’55 Chevy wagon—that one, you might say, has seen better days. (Shop truck is a loose definition as it has no powertrain, hence doesn’t run, and some of the sheet metal is more accurately represented by saying “sheetair.”) Apparently, rust is the sheet metal of choice that we have to work with so there will be lots of patch and replacement panels in the future. Thank goodness for Golden Star Classic Auto Parts and Danchuk as each possess the parts we would need. Our tech center is filled with all of the necessary tools courtesy of Harbor Freight to perform this sleight of hand, expertly handled by Jason “IJ” Scudellari, our tech center manager.

When it comes time to round up sheet metal for a Tri-Five (and a myriad of other vintage tin) and the accompanying accessories there’s no better place to start than Golden Star Classic Auto Parts and Danchuk for a Tri-Five project. You may remember that we have already replaced a rear section of flooring as well as the tail pan in this ’55 Chevy wagon. That turned out very well so it is onto the next phase. Of course we could have started anywhere on this old station wagon but we opted to start in the rear and work our way forward and upward.

Truthfully, sheet metal work, such as a ’55-’57 Chevy tailgate, has little to do with sheet metal work and more to do with obtaining fresh metal and making sure it fits, the gaps are good, and the tailgate functions correctly. Check off all of the above.

The Golden Star tailgate carrying PN TG13-55 will work on all Tri-Five Chevy Station Wagons. Unfortunately, or fortunately (it’s a matter of perspective), the Nomad Chevy station wagon requires a different tailgate. The upside here is the necessary hardware to make either work is basically all the same and that’s where Danchuk comes into the picture. We rounded up all of the necessary hardware (since our gennie goodies had seen much better days) from them. It included the usual assortment of tailgate strikers and latches, retractor cables, tailgate balls and covers, handle to latch rods and lockable handle, tailgate access cover, and fastener assortment of hardware. There was one item (actually an individual) we borrowed from Danchuk and they made us return him. Frank Correia is an expert on Tri-Fives but does have a particularly deep well of information on wagons. Whether a standard or a Nomad, Correia had us covered and it was like having a speaking assembly manual (that could actually pick up tools and parts), making this project that much more doable.

If you haven’t replaced a tailgate on a Tri-Five Chevy Station Wagon it would be a good investment to latch onto an assembly manual (available through Danchuk). While this project is straight forward, the retractable cable (holds tailgate while in the down, open position) isn’t difficult, but it’s sneaky. We broke out our Harbor Freight toolbox and grabbed an assortment of tools that we would need to remove the tailgate, and from both sides of the interior trim pieces, the inspection covers, and taillight assemblies.

Read More: How To Install Coilover Conversion Kit On A Tri-Five Chevy

Once the old tailgate was removed, we realized just how bad ours was and that replacing it was truly the only way to go as 60-plus years of rust can really take its toll on sheet metal. With the ’gate and both tail light assemblies removed we could see into the rear quarter-panel area. Once the interior trim and inspection plates were removed it was time to exchange the old for the new retractor cables. You can see how the cable works by looking into the rear quarter-panel area through the taillight assembly opening and from the ground up at the rear axle.

The installation of the new tailgate is pretty straightforward. It’s the old remove-and-replace approach. The trick here will be negotiating around old and rusty hinges, which we had. In our case, getting off the old hinges required grinders, chisels, and chasing the threads so that they are “fresh” and the new hardware easily passes through them. We were fortunate in that once we performed the removal of the pair of hinges and now attached our new Golden Star tailgate everything aligned very well. Care was taken in removing and cleaning up the old hinges and that made a big difference and the fresh hardware from Danchuk also improved overall alignment as all strikers and latches were “tight.”

The retractor assembly, which includes cable and clevis pin (PN 1058 cable, and PN 1058A cable clevis pin) is bolted into position through an inspection opening in the passenger compartment (one per side) just over the wheel well area. With the taillight assembly removed on each side and from the ground looking up you can see where the cable runs from its forward anchor position. The cable runs through and is centered and aligned by a pair of OEM factory brackets that you can see from the ground-up view. Since these brackets do not move, they should be fine and reusable. With the retractor cable assembly anchored you can then pull the cable forward, fully extending it to make sure it moves freely. It will then be anchored via a pair (one per side) of tailgate balls and covers that attach directly to the tailgate. The length of the cable is predetermined so there’s no need on your behalf to shorten or lengthen this cable. It should be noted that the cable does pass from the quarter-panel area through a tailgate cable guide (cast piece) and brings the cable back into the area where the tailgate is located. This part is often reusable but, in our case, we could see the wear marks and since all other hardware was new, we opted to change the pair. It will take two of the Danchuk (PN 17408) tailgate cable guides, one per side; they are a simple remove-and-replace item.

Next up there are a pair of Danchuk strikers (PN 18780) that come with fresh hardware as well as a pair of Danchuk latches (PN 18498) that you will affix to the new tailgate. Other items such as the lockable handle (PN 16538) with latch rods (PN 15539) and Danchuk striker cover (PN 16832) for the tailgate handle latch and the tailgate access cover (PN 17066) pretty much finish out the changeover.

Follow along with the photos and watch how we remove and replace the original tailgate with the Golden Star freshly minted one outfitted with all of the necessary hardware from Danchuk.