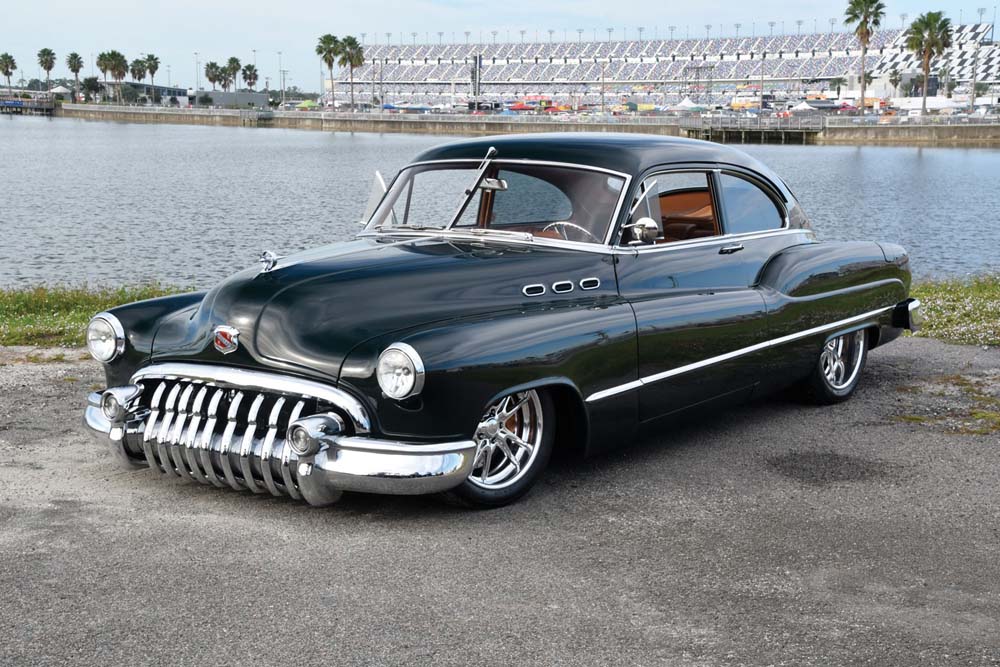 That’s the philosophy that has evolved over the years for Denny Merritt, owner of Merritt Auto Repair in Georgetown, Indiana, established back in 1987. While Denny enjoys building custom cars for clients, he likes it even more when he has time to create unique additions to his own collection, like this deceptively stock-looking 1950 Buick Sedanette.

His latest is part of a long line of customs to include a 1970 Barracuda, a 1940 Ford, a 1971 El Camino, 1972 Avanti, and a 1948 Studebaker pickup. He takes his individualistic approach one step further, smiling when he says, “Everything I do eventually expands into something that I wasn’t planning on doing!” The results always seem to justify the extra effort since his cars regularly find their way to the winner’s circle. 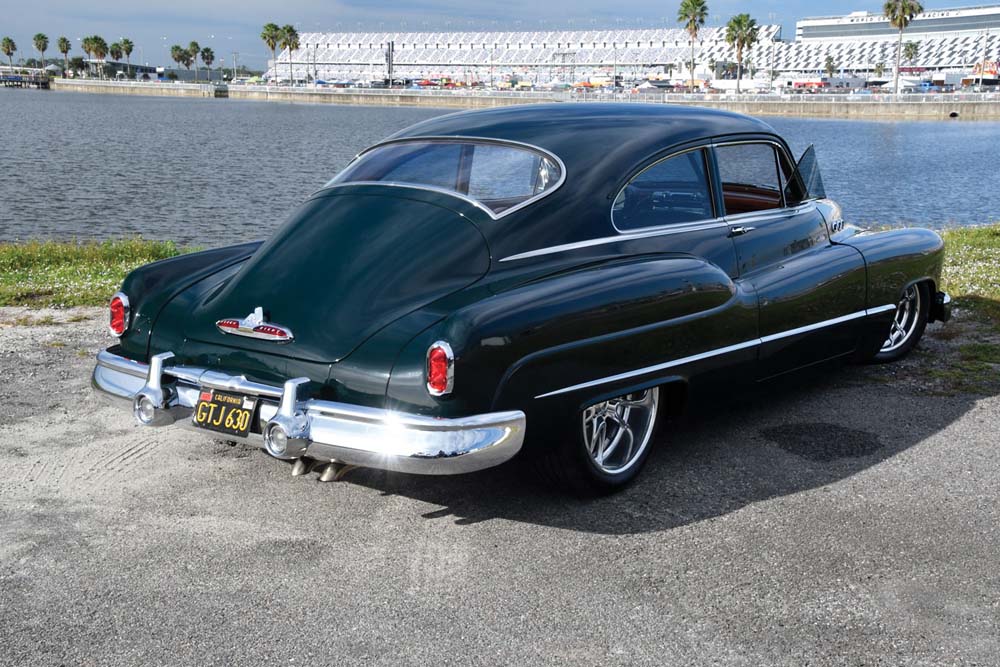 This 1950 Buick Sedanette is a good example of finding unique raw material where the “De-Merritt” touch could fuse art and technology. From the toothy grille and fastback rear, the Buick Sedanette’s silhouette is immediately recognizable as the embodiment of ’50s styling. When Denny discovered it in Louisville, Kentucky, he was happy to find it was a California hot rod with virtually no rust. Acquired in 2012, Denny kept it until 2016 when planning was complete and work began. The customizing process took another four years with virtually everything under its vintage metal upgraded to new millennium standards while keeping the exterior deceptively stock. Only the wheels and low-slung silhouette hint at the transformation while the impressive exhaust burble underscores the power lurking beneath the side-opening hood. 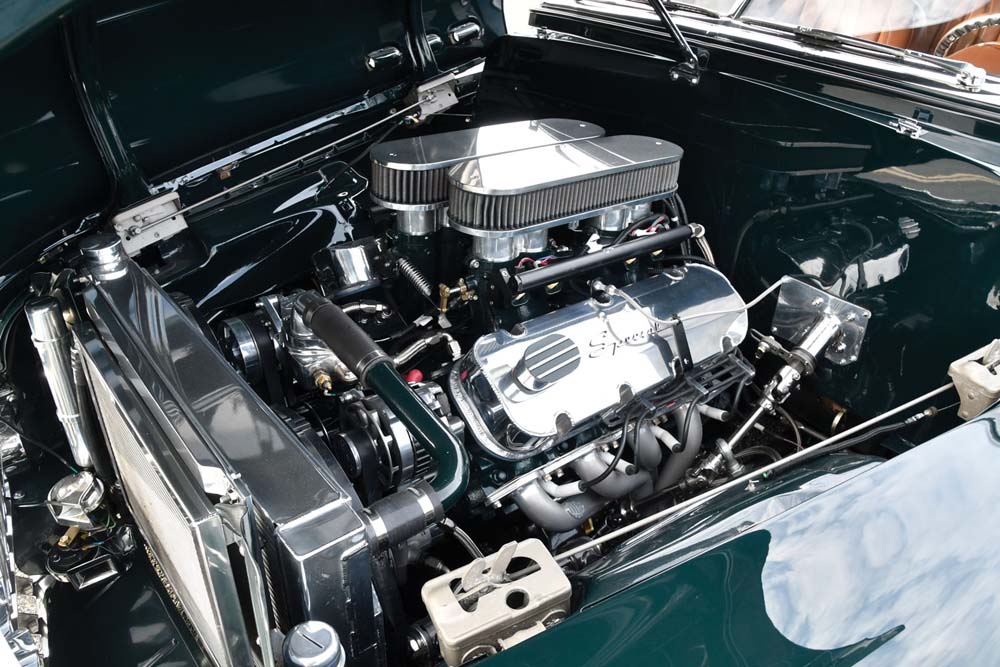 The first step was separating the body from chassis and having both dipped to ensure a rust-free future. The original frame rails were reinforced then upgraded with a Nova clip and a GM 10 bolt rear end with 3.73 gears. In order to eliminate future parking woes, a modern Flaming River power rack-and-pinion steering wheel ensured the heavy Buick Sedanette could be guided with just one finger. The same theory applied to the huge set of Baer brakes with six-piston calipers and 14-inch rotors. They are the biggest big brake kit Baer makes, capable of bringing the big rig to a stop in an impressively short distance. 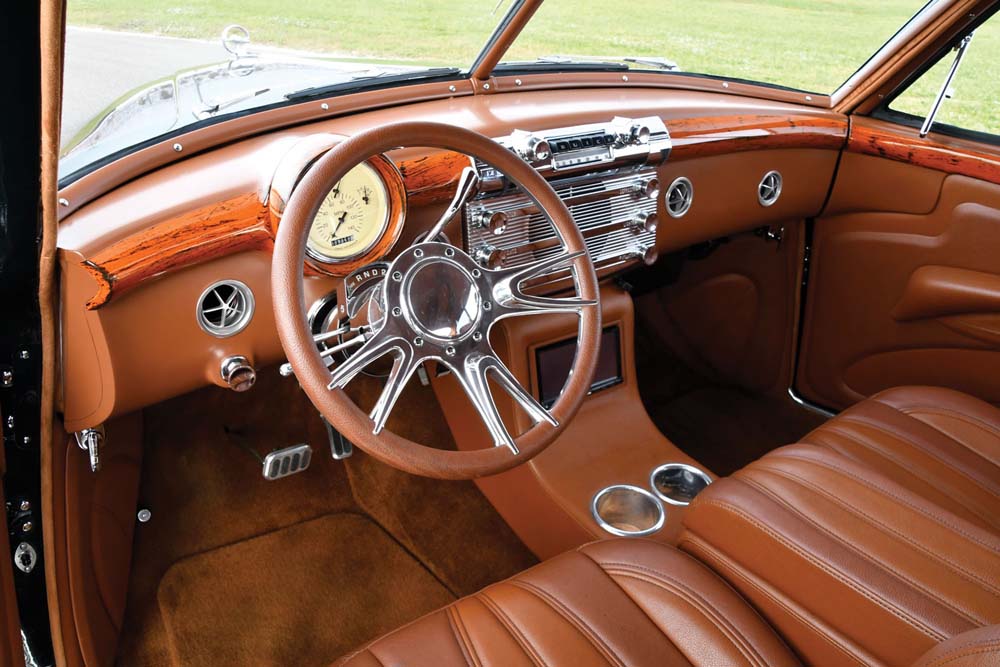 One of the mandatory additions for all of Denny’s cars is a low profile, achieved on the Buick Sedanette thanks to a RideTech air suspension. The ShockWave air springs on all four corners create “high for the highway” and “low for the show” at just the touch of a button. Hidden in the trunk, the reserve tank and compressor share space with the stereo amplifier and second battery. The final chassis upgrade was transforming it into a roller with a set of Billet Specialties Fury rims, 18×9 up front and 20×10 in the rear, fitted with Cooper rubber.

Once the frame was complete, it needed a powertrain—and tweaking the original Buick fireball straight 8 engine was not the answer. Choosing the right blend from the endless aftermarket menu can be daunting, but with 60 years of experience, Denny chose to work smarter rather than harder, opting for a Chevy 502 Big Block crate motor. “It’s not only easier than building one from scratch, it comes with a warranty.” Induction upgrades began with the Fast EZ-EFI 2.0 Self-Tuning Eight Stack System with K&N filters, a combination with high efficiency and attention-getting good looks. 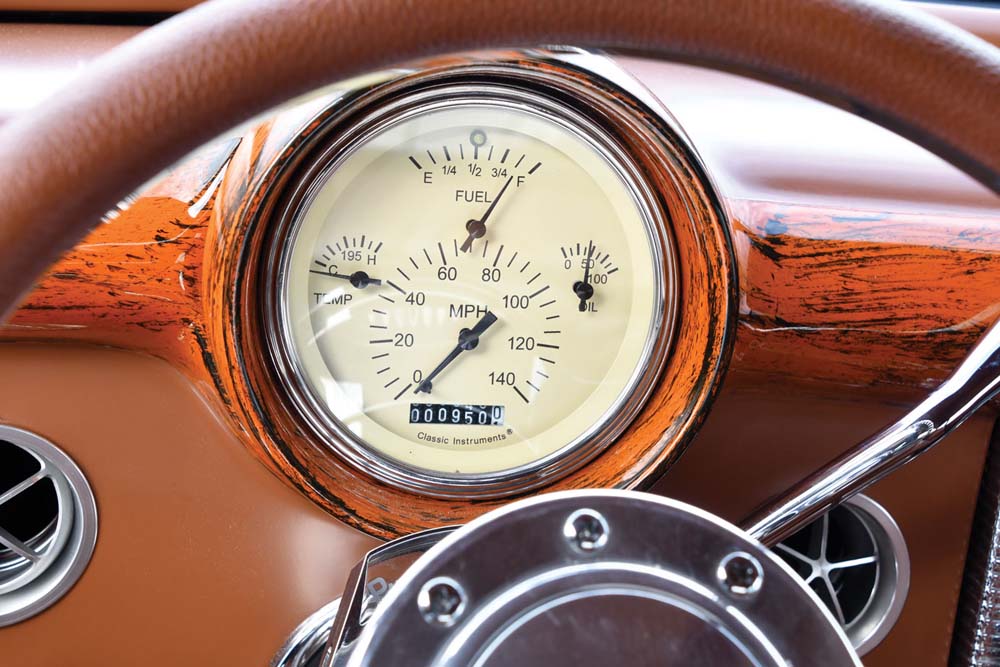 Exhaust is channeled through a set of Doug’s stainless steel headers, flowing through 1-3/4-inch stainless piping to a set of Flowmaster mufflers and polished tips. The big block V8 creates an old-school baritone rumble that’s become an essential element for every hot rod experience. Teamed up with a 700R4 transmission, the 502 Big Block puts out an estimated 440 hp with more than 510 lb-ft of torque capable of creating a true holy-whoa moment!

Moving inside was a team effort, with Denny upgrading the Buick faux wood grain dash with a multi-function Classic Instruments gauge in the stock location along with new vents for the Vintage Air. The steering wheel turns on a chrome column from Flaming River and mimics the pattern of the wheels. The second half of the team, responsible for the stunning stitchwork, is Ace Custom Upholstery and Rod Shop in Fairfield, Illinois. Comfortable with their talent, Denny delivered four seats from a Lincoln LS, picked out two complementary shades of Cognac vinyl, and said “Call me when it’s done!” The six-way power seats up front and the aggressively bolstered seats in the rear are separated by a center console that flows the full length of the interior. 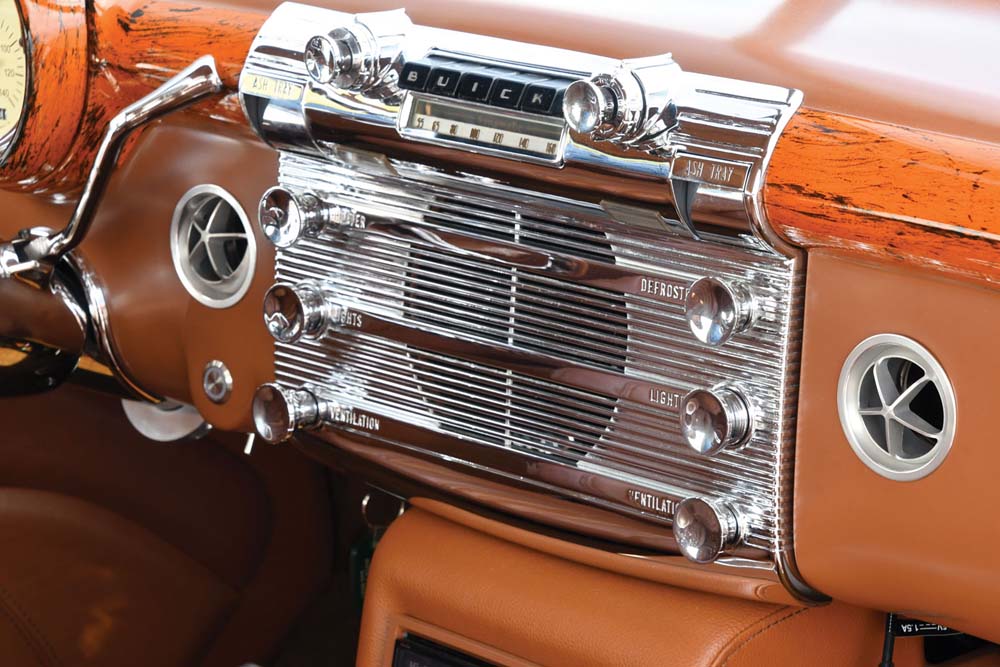 Custom upgrades include the door panels, devoid of any handles or cranks, along with unique upholstered touches on the headliner and in the matching trunk. In addition to the controls for the air suspension, power windows, and door buttons, the console holds the Kenwood Excelon DVD receiver with 6.95-inch touch-screen. Component sets are positioned in the center console and behind the rear seats with additional power coming from the Kenwood amp in the trunk. The combination makes the car a road trip favorite, entertaining driver and passenger with concert-level sounds. 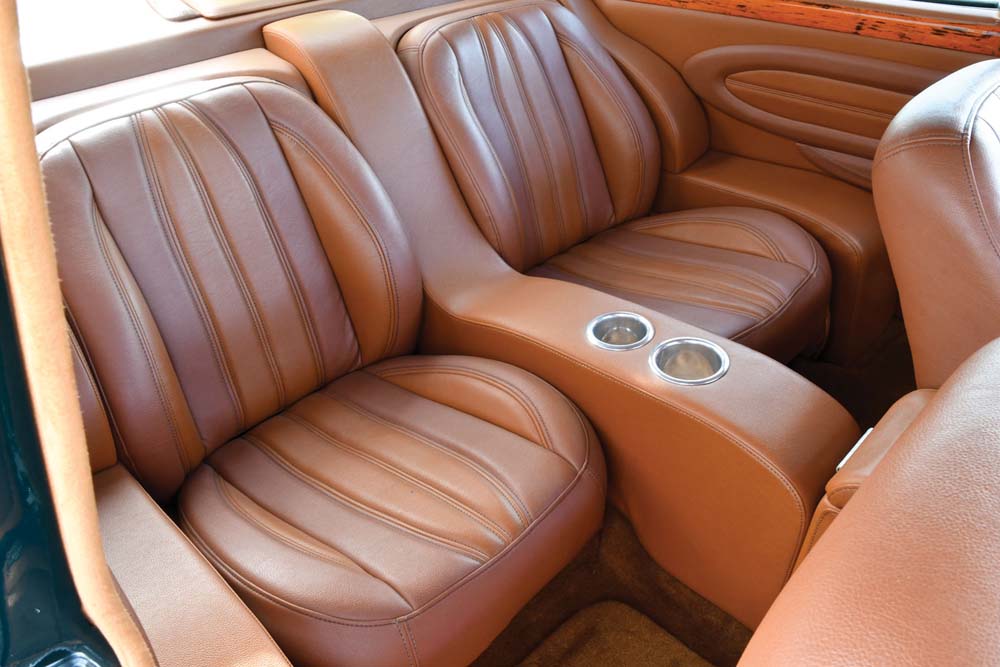 The final step was color and Denny kept it simple. “I went down to the Martin-Senour paint store, looked at their color chart, and immediately found a dark green color that I liked. I said give me 3 gallons. Then I went back to the shop, mixed all three together to ensure uniformity and sprayed it myself.” Suffice to say it came out quite nicely, with the car taking a trophy in its first outing, earning a Best Use of Color at the NSRA Louisville event. 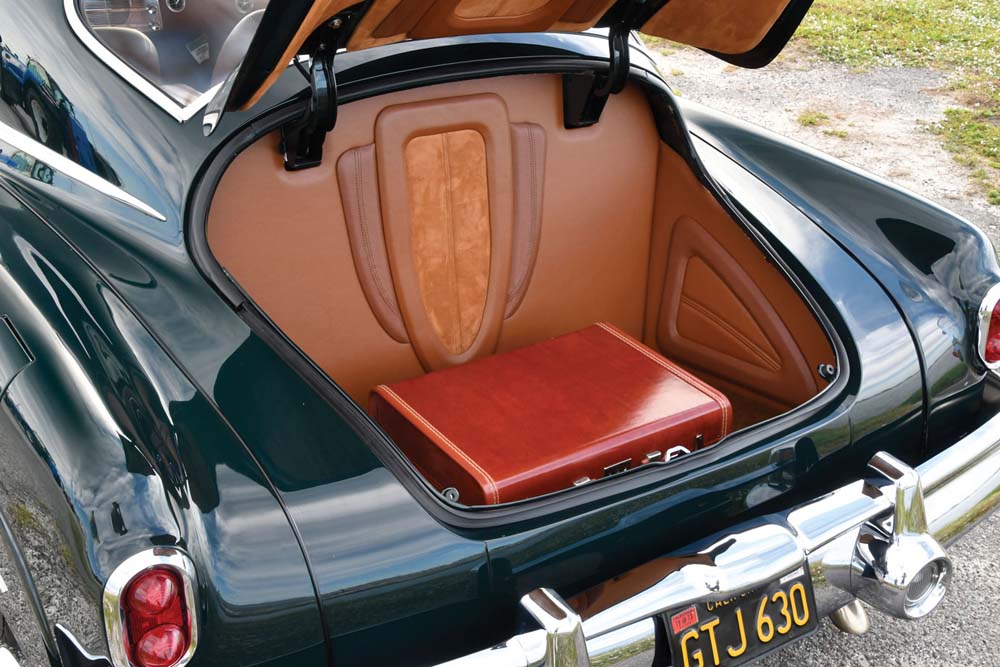 “The original plan was to simply create a nice driver,” Denny says modestly. Clearly, he has succeeded and then some. The old Buick Sedanette has become a technological tour de force with enough power to unleash that tire-melting hooligan that we usually try to suppress! While this hot rod is definitely great on the road, the fun part for Denny is the building process and he already has a couple of cars in the wings lined up for a dose of that famous Merritt creativity. MR