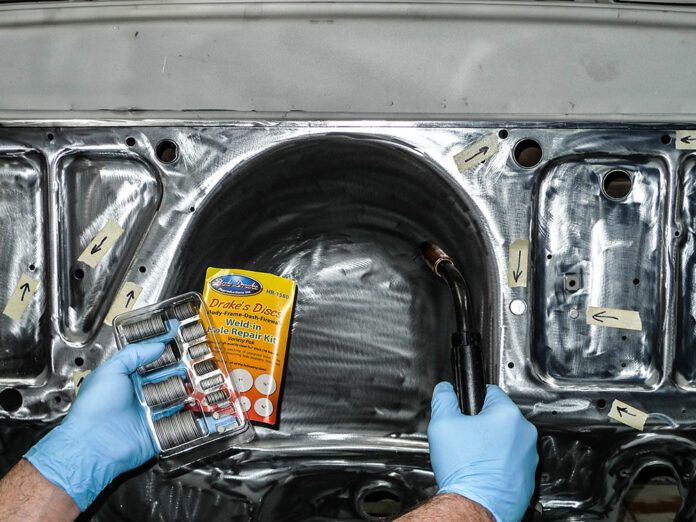 “Is this Professor Hammer?” That’s pretty much the way the telephone call began. When I got around to saying, “This here’s Rotten Rodney,” I was tickled that he actually knew me. As it turns out, Ron Covell reads my stuff, same as I read his, and I’ll keep that as a feather in my cap from here on. Anyway, we had a nice conversation. For reordering, however, Ron Covell suggested that I call Bob Drake, who is now the source for the discs of desire—Drake’s Discs, as they’re known today.

So, now that we’re down to the short strokes, in the metalworking phases of our 1955 Chevy second-series build, we’re focused more on little things. For example, you know those three big, heavy, pot-metal badges that ordinarily adorn the hood and fenders of such old trucks? Well, ours are pretty pitted. We know Brothers Truck carries new ones, but our project truck’s owner is usually open for suggestions. Knowing so, we sort of suggested deletion of the big old badges in favor of a cleaner, sleeker look for his cute little truck.

Long story shortened: we purchased a new assortment of Drake’s Discs from Bob Drake Reproductions. As always, they’re a great time-saving shortcut for flush-plugging holes in body sheet metal, no matter your MIG/TIG preferences. If you’re really good, you might gas-hammer-weld yours. Being somewhat hard-of-sight, I usually leave it up to the designated welder, Mrs. Rotten.

First things first, we’ll lose three holes on one fender, which happens to be a repaired original. The other fender is brand new from Brothers Truck. Quite conveniently for us, it came without unwanted holes. The Chevy Pickup’s hood is original equipment with extra holes as well. When we get to the firewall we’ll try to figure out which holes should stay. There we’ll be dealing with holes of different sizes, but that’s OK. We’ve got the full assortment.

As sheet metal repairs go, at least around here, this’ll be fairly straightforward stuff. This one’s—mostly—about saving time. On that note, here’s how Drake’s Discs work for us. Since they work for us, they’ll likely work for you, too.

Clearing the Air—This Part’s on the Fly

Earlier today we had the big door open. It’s been warm as of late, and wouldn’t you know it, flies came on in. We’re not sure what to call this specific species, but they’re medium-to-large and relentless—the kind that buzz all around our heads when we’re working. Have you ever tried doing your best work in the midst of such unwelcome aerobatics? If so, this part might be of particular interest—to you.