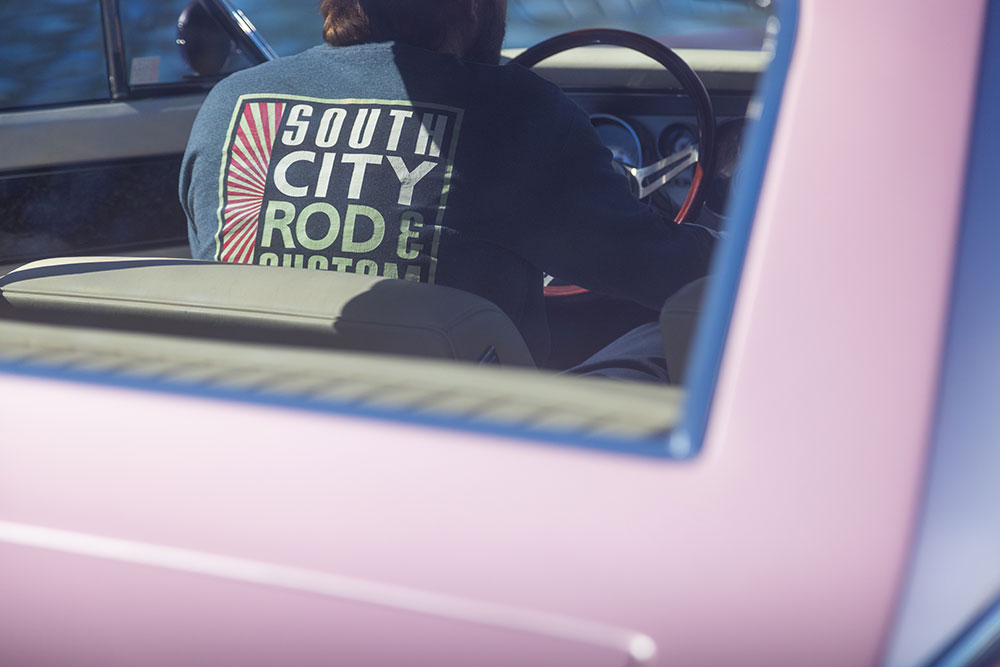 The picture-perfect setting along the Bay Area coastline in NorCal presents an idyllic view of Bill Ganahl’s 1964 Buick Riviera. Did you know that “Riviera” translated from its Latin origins means “coastline”? General Motors wanted their new Buick luxury car to evoke the allure of affluence and the coastal lifestyle along the French Riviera. Well, times have changed, but we can rest assured the 1964 Buick Riviera continues to evoke all things good. 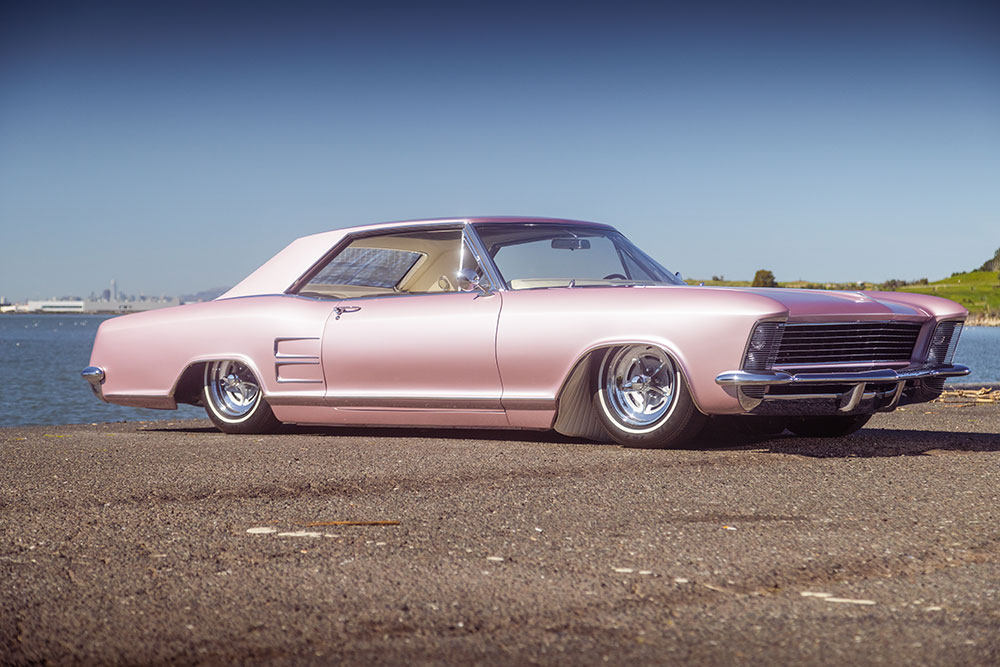 The first generation (1963-65) is arguably the most desired of the Buick Rivieras in our world of hot rodding and among collectors. This generation has earned Milestone status from the Milestone Car Society. It is acknowledged that GM designer Bill Mitchell (responsible for the 1963-67 Rivieras) is credited with this wonderful design. Sergio Pininfarina once proclaimed it “… one of the most beautiful American cars ever built.” Raymond Loewy of the Paris Auto Show once said, “… the Riviera was the most handsome American production car … aside from his own Studebaker Avanti.” It’s no wonder the first-generation Buick Riviera is considered a styling landmark and is a highly desirable collector car among the coat and tie gathering and the T-shirt crowd. 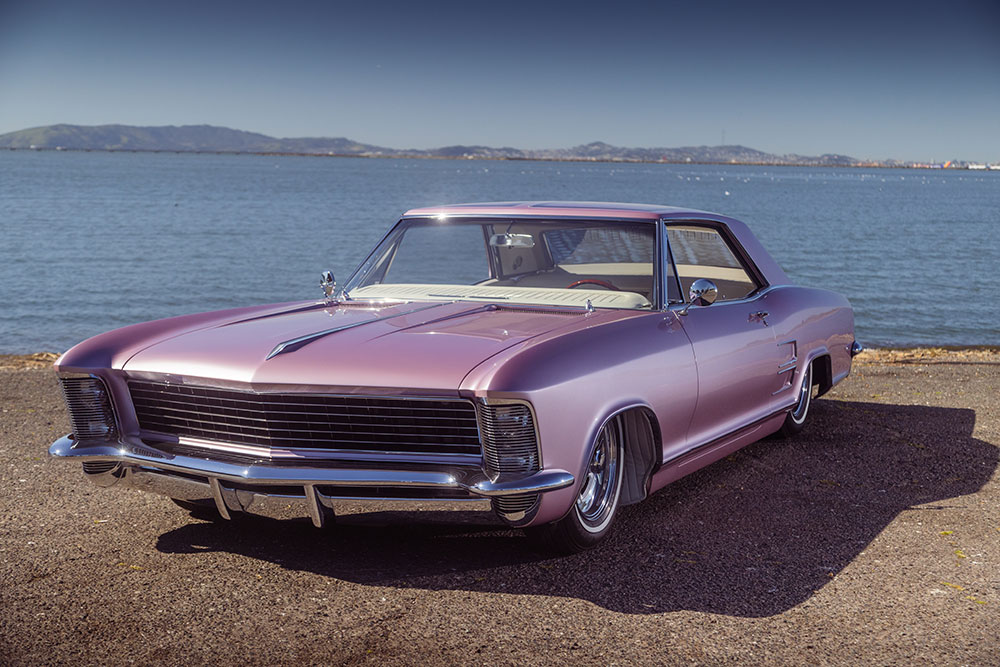 Bill is no stranger to hot rods and as a principle and outstanding builder in his own right at South City Rod & Custom in the Bay Area he appreciates a “good ride.” He wanted his personal conveyance built in the tradition of a Bellflower-style custom. We would agree that he’s remained close to form with mild variations in the use of lace panel accents (see the roof), mild interior upholstery upgrades, and his own wheel treatment. So, what is a “Bellflower” custom? Many hot rodders would agree that Larry Watson gets credit for developing the “Bellflower” custom look, although he may not have been the custom car creator who built the earliest versions. 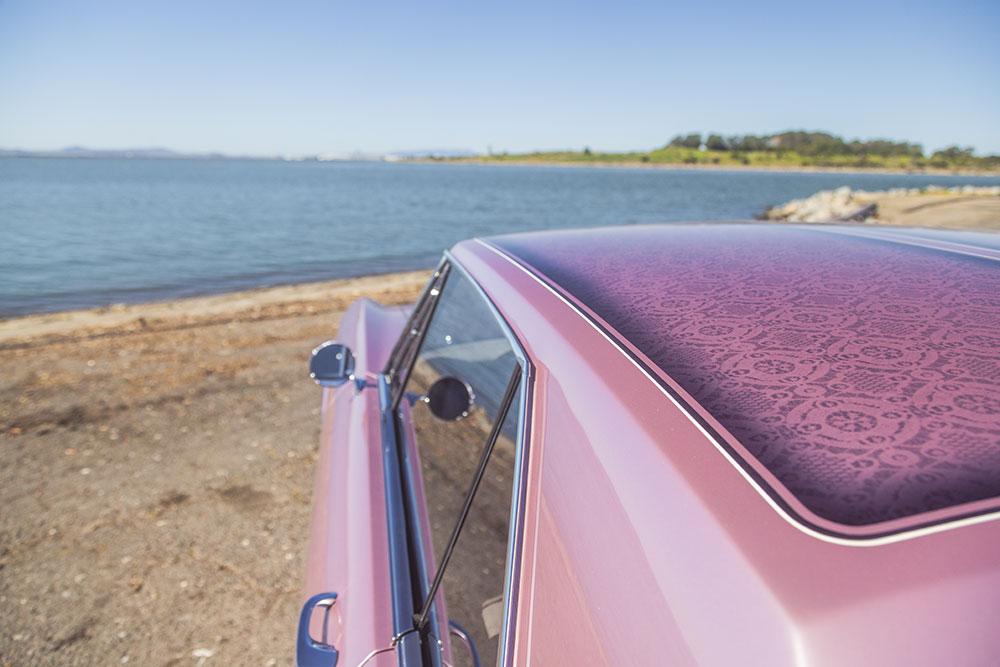 The Bellflower custom is a mild treatment featuring metallic paint with the addition of scallops or flames, along with pinstriping and not much else. Interior-wise it too would be mild, with simple pleated seating, while the remainder of the interior is stock. As for wheels and tires that too is mild, featuring possibly chrome steelies and thin whitewalls. One last Bellflower detail is the use of chrome pipes that run along the bottom of the rear quarter-panels just behind the rear wheel openings. Although Bill opted not to travel down this road, we believe his Rivi is an excellent example of the Bellflower style. We might also add that it is right at home along the western coastline. 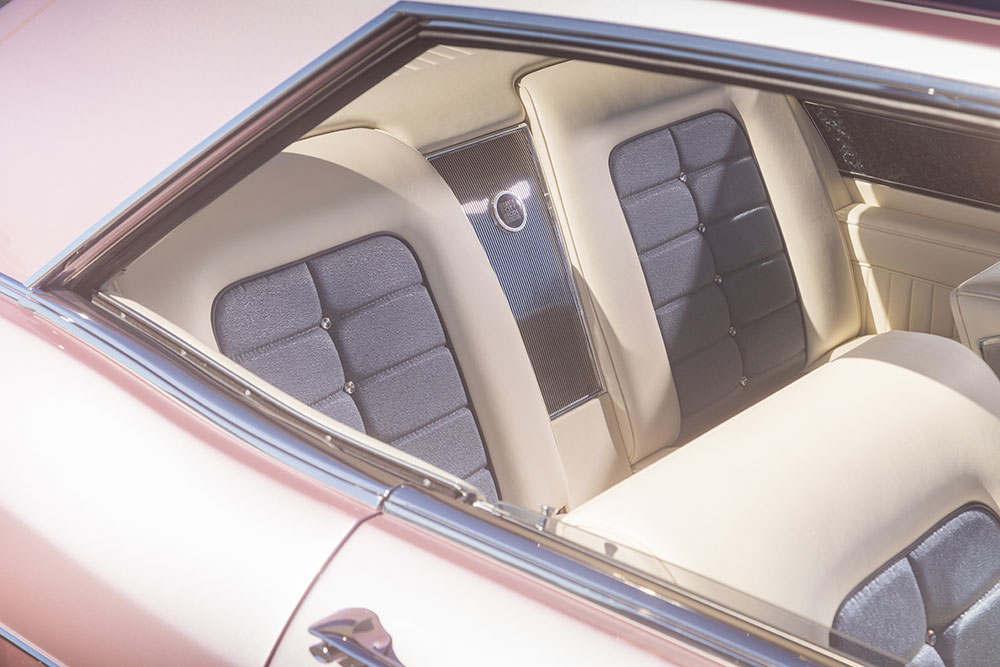 As a builder the options for Bill were vast. So, why a mild custom? In his mind he knew he wanted a long-distance cruiser that would offer all the “kool” of a custom but at the same time all the creature comforts he and his wife, Sabina, could enjoy on those long highway runs. His thought process proved to be spot-on as the Rivi’s maiden voyage was a 4,000-mile round-tripper to Oklahoma. Accompanying he and Sabina were his mom and dad in their ’33 Ford sedan of which Bill also participated in that build. (Editor’s note: Bill’s dad is Pat Ganahl who knows a thing or two about hot rods and customs, the building, and the driving of our cars firsthand. As a lifelong hot rodder, he has devoted a great deal of his professional life as a “magazine guy” recounting the tales of our hobby/industry for all of us to enjoy in many of our leading publications from within our or hobby/industry. —B.B.) 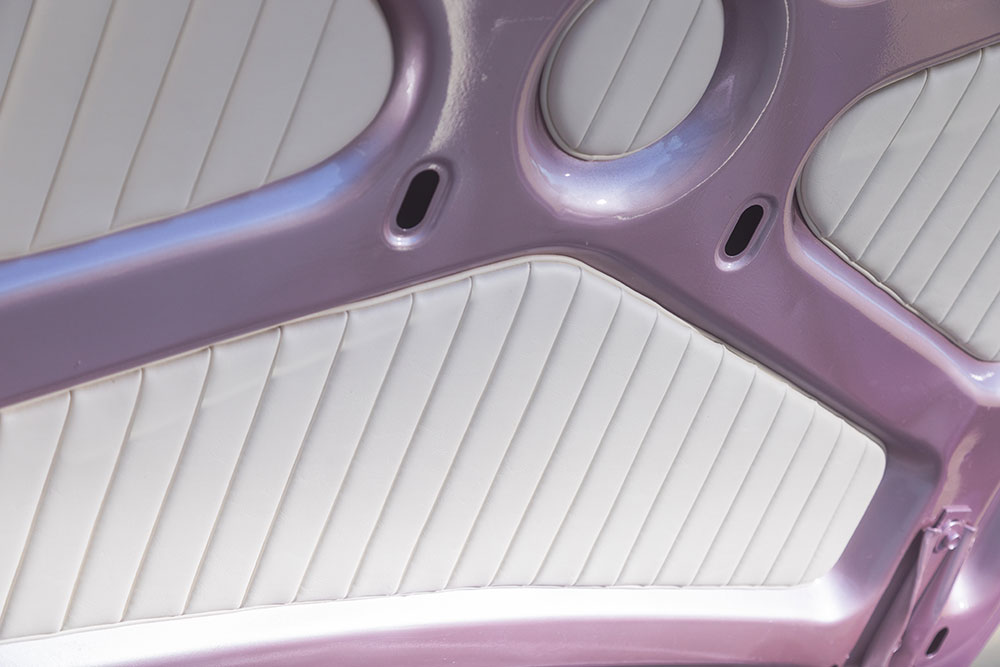 Bill’s 1964 Buick Riviera came into his possession as a runner. Just what he wanted as he intended to maintain the ready-to-drive mannerism, retain the stock interior, and “scuff and shoot.” There you go, a mild-mannered Bellflower custom. (You must marvel at his youthful enthusiasm–but alas that’s not the reality of owning a hot rod.) In a moment of pure hot rod joy, he proceeded to do a burnout that any drag racer would have thoroughly enjoyed. And you ask, “What’s the problem?’ Most of the time nothing, but this time Bill managed to “hurt” the V8 engine. So, out came the 425 Nailhead and the freshening began at Center Auto Machine. By hot rod standards the Nailhead is “mild” , yes reliable and ready for its future as a long hauler. The Buick V8 does use the stock intake with a four-barrel Edelbrock 750 carburetor, Offenhauser Valve Covers, and an “open air” aftermarket air cleaner—note the lace paint on the top plate, nice touch. Other engine spark accessories include a factory-looking PerTronix distributor and coil, Taylor spark plug wires, Powermaster alternator, electric Derale fans, and an Odyssey battery. The exhaust is based on stock manifolds with 2-inch-diameter tubing that runs back to a pair of mufflers, all handled by Livermore Muffler. 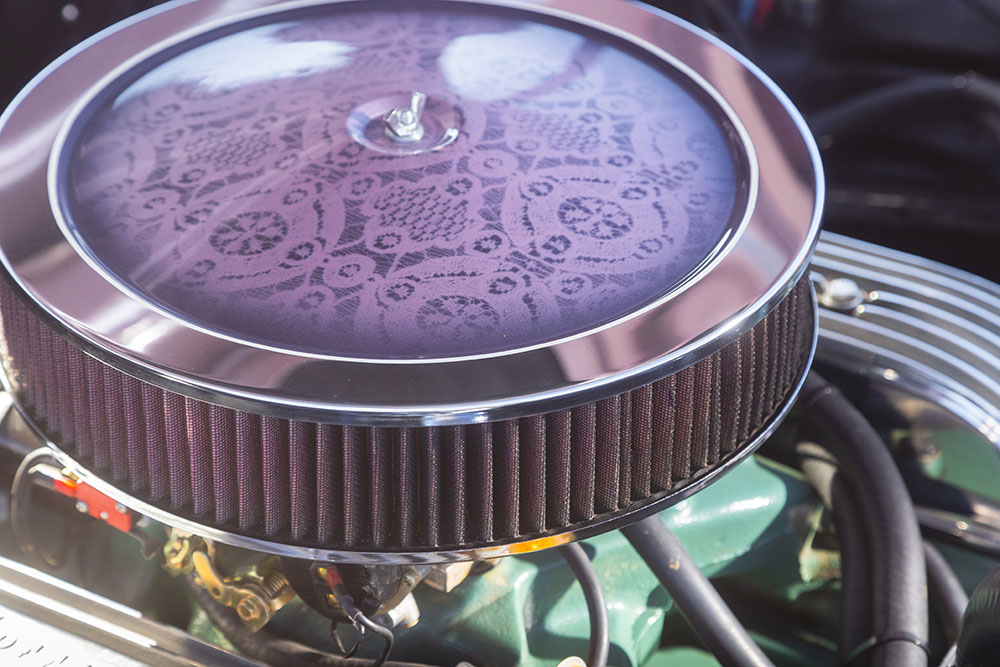 During the engine’s downtime work began on the transmission. The ’64 three-speed ST400 transmission didn’t have the “switch pitch” converter. So, Bill installed a ’66 switch-pitch automatic but this transmission had a slightly different shift pattern than the ’64. This necessitated the use of a Shiftworks; they specialize in cables to adapt the ’66 transmission to the ’64 shifter. 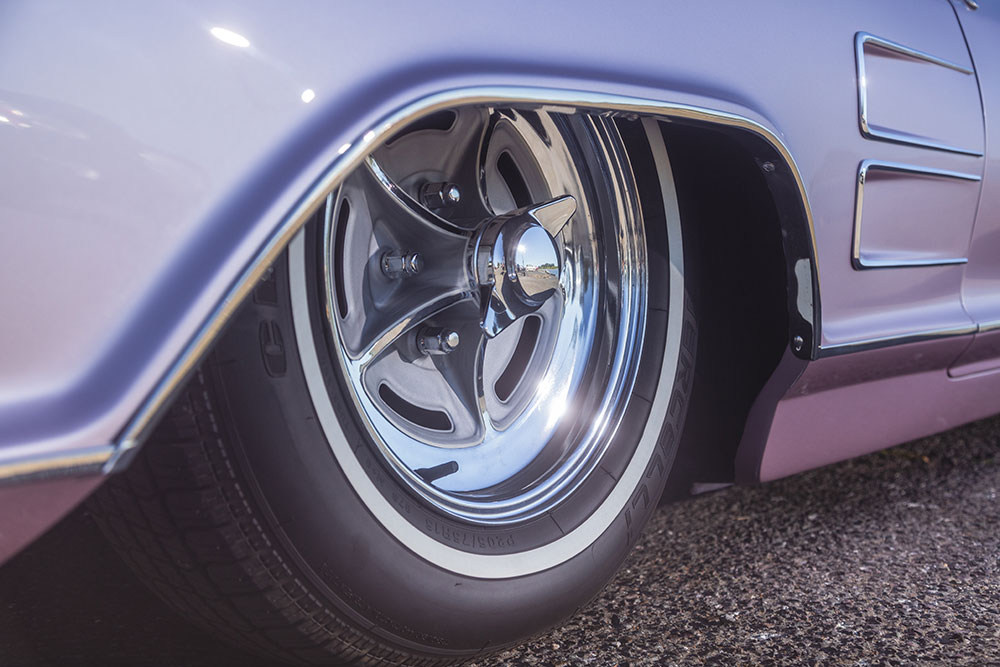 At this point it was time to think about the body- and paintwork all well handled by Dad Ganahl. It should be noted that the body, while predominantly stock, does feature shaved badges and a grille change. The noteworthy mod is the use of a ’65 Rivi grille that features the headlights neatly hidden behind the clamshell doors.

Next Joe Compani of Compani Color helped with the “cut and rub,” bringing out the final luster of the House of Kolor Desert Rose custom mix. (Compani cut his teeth as the in-house painter for years at Roy Brizio Street Rods.) It was Darryl Hollenbeck of Vintage Color Studio who used his years of experience to spray on the House of Kolor paint in producing the subtle lace pattern on the roof. There is a great backstory on the proper lace selected for use on the roof. Sabina spent days looking for and at, comparing, and making a final decision on the proper non-floral pattern. 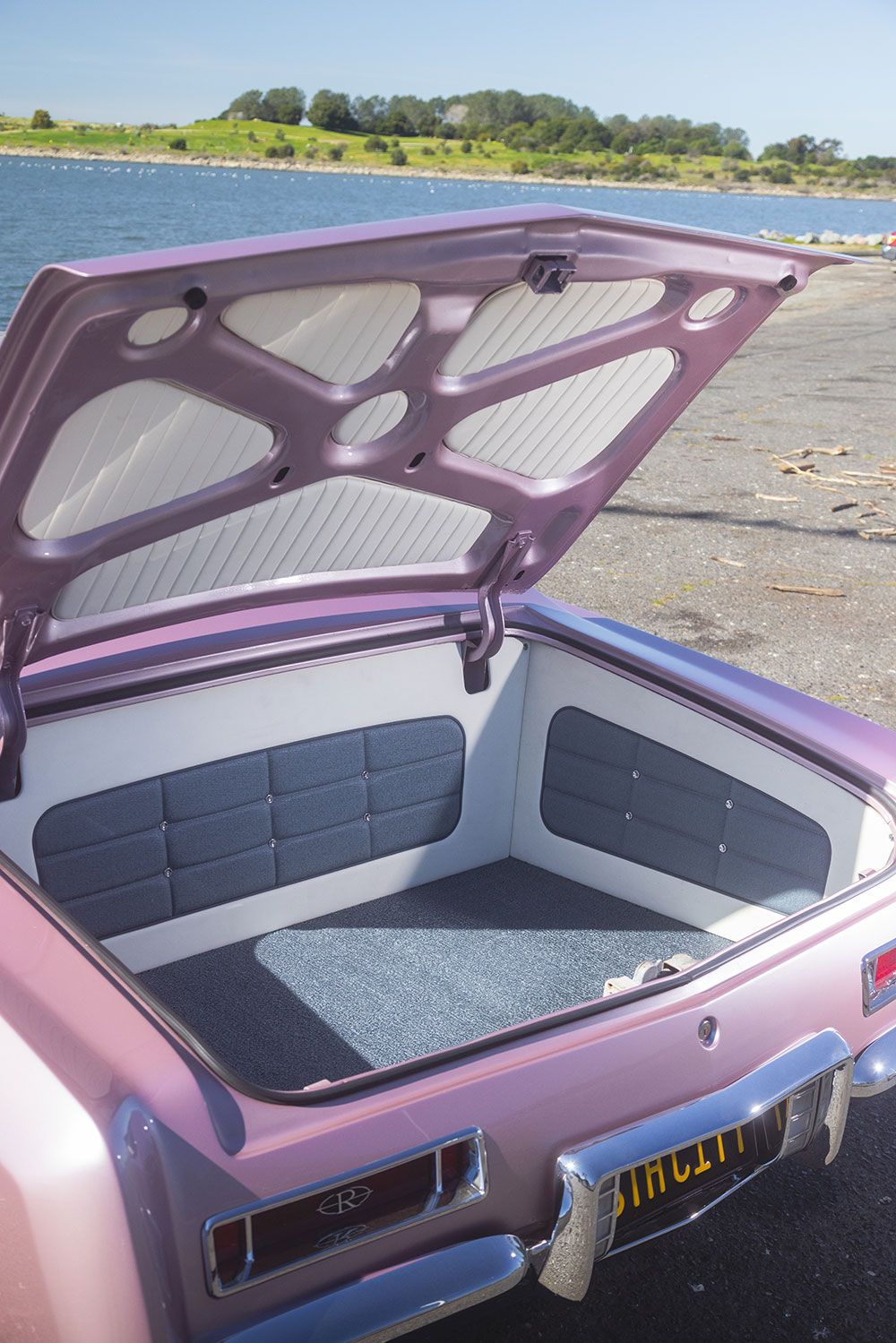 Next up was the interior and from here it was Bill and Chris Plante who went through literally hundreds of upholstery samples. The stock front buckets were lowered and moved back. (It should be noted that Bill, like his dad, is somewhere north of 6-feet tall, so having the extra legroom is much appreciated.) It was also Plante who came up with the idea for the headliner with its button square pattern in a combination of leather and material. Next out came the dash for a makeover, in went the Vintage Air AC, and the use of the stock steering column topped with a Grant steering wheel. Inside the Riviera there is a center console with a floor shifter and storage compartment that sweeps upward and into the instrument panel dividing the buckets and the front and rear seating. While the stock factory gauges are retained there is also the obligatory three-pack of Stewart-Warner gauges (oil pressure, water temp, and volts) mounted into the dash panel just above the AC control panel and registers. The inlay material that is used on the doors and center console comes from Fender (the guitar people) and is the pickguard material (available in sheets from Fender).  All the required wiring was handled by Bill. 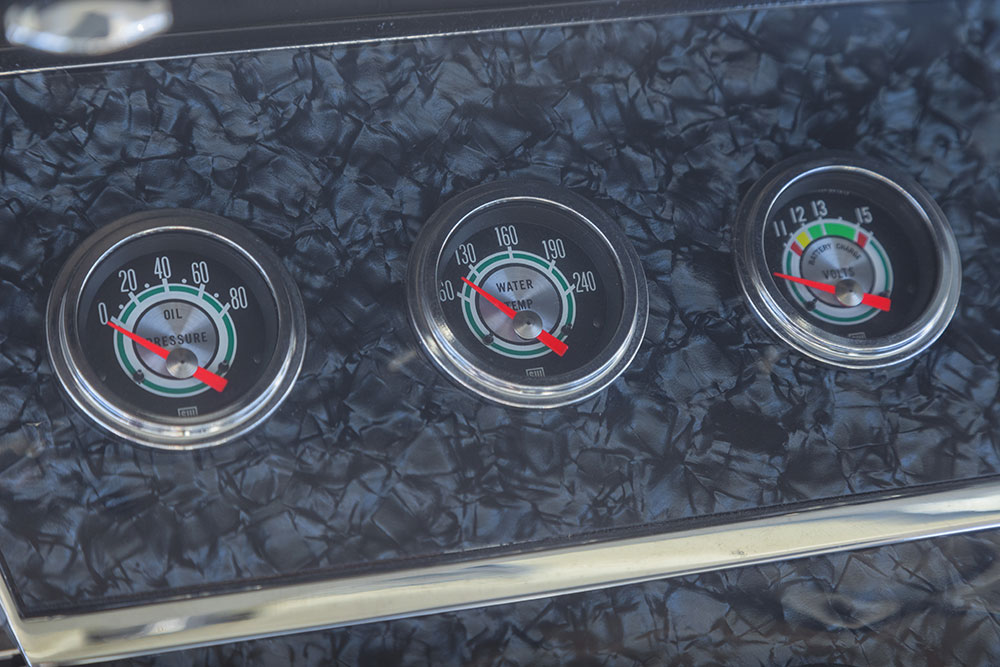 The freshened suspension does feature Slam Specialties air suspension. Next up is the use of finned Buick drums in the front and rear and Buick GS wheels and Vercelli tires at the corners. The wheels are 15 inch while the rubber measures 205/75R15. 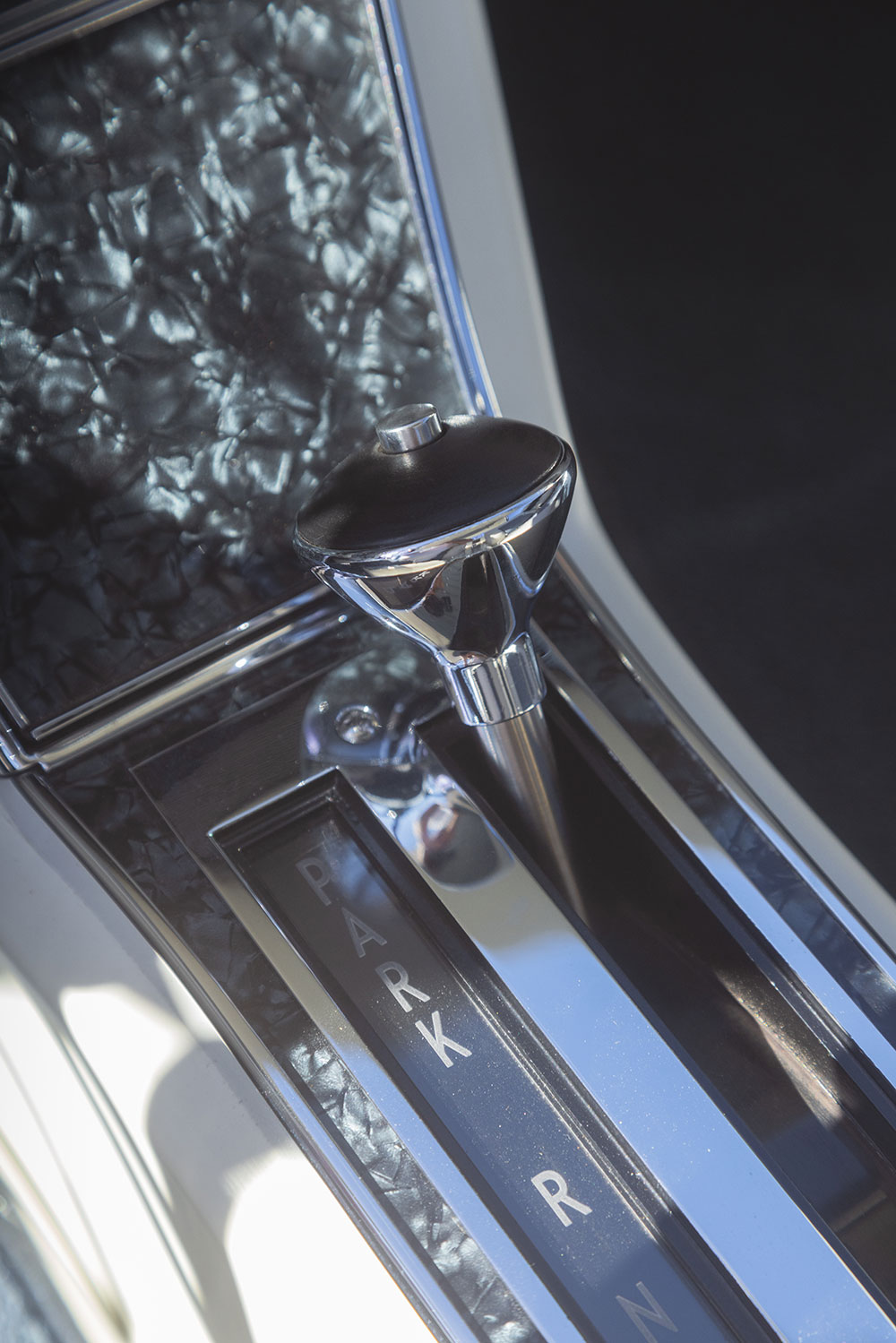 Did we mention that this was to be a simple and uncomplicated build? We all know how this roller coaster ride can happen. We are glad Bill took on the challenge and now has an amazing ride but also a great example of a mild custom for all of us to see what can be done with imagination, patience, and plenty of help from your family—both close and extended. MR