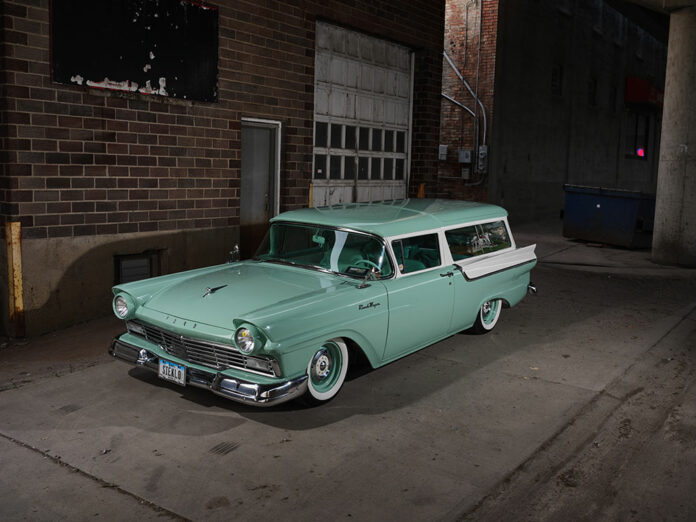 In speaking with longtime hot rodder Ken Stek of Ottumwa, Iowa, he tells us he likes to begin his builds from the inside out. He starts with the steering wheel and builds the car around it. Having built many cars over the years this method has proven to work for him. His current ride is this 1957 Ford Ranch Wagon that serves as a daily driver and a calling card for his shop Stek-lo Rodz Shop in Ottumwa. 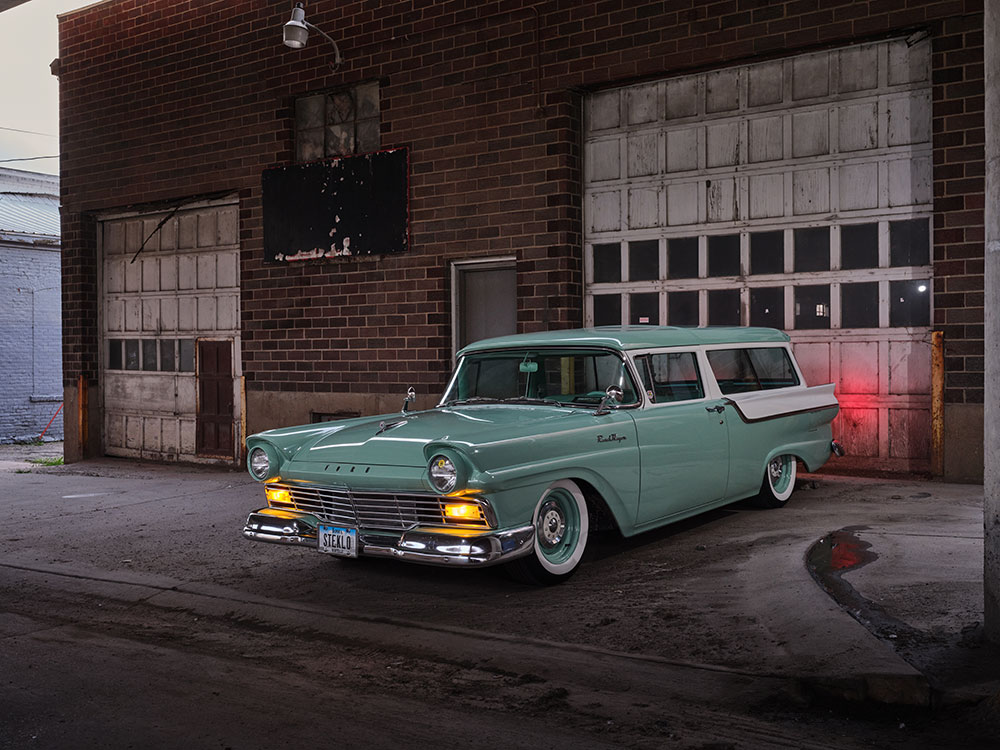 As is often the case, a project starts in one direction and veers off in another. Ken wanted a daily driver that he and Lisa, his wife, could use on road trips, such as touring the old Route 66. The build itself would be lowkey. Well, that’s the way it started. The station wagon was literally found in a farm pasture some 10 miles from Ken’s home.

Ken rounded up an 2008 Ford GT Mustang that provided him with all of the required pieces to have a modern drivetrain and other amenities. From here it was the “inside out approach.” Ken leaned on Lisa to come up with a color for the custom CON2R steering wheel. Upon his arrival at Stek-lo Rods Shop, Steve Garrett began on the wagon body color. Working with the PPG palette, a custom mix basecoat/clearcoat (Stek-lo Garrett Green) was utilized via four coats of Deltron DC on the 1957 Ford Ranch Wagon. 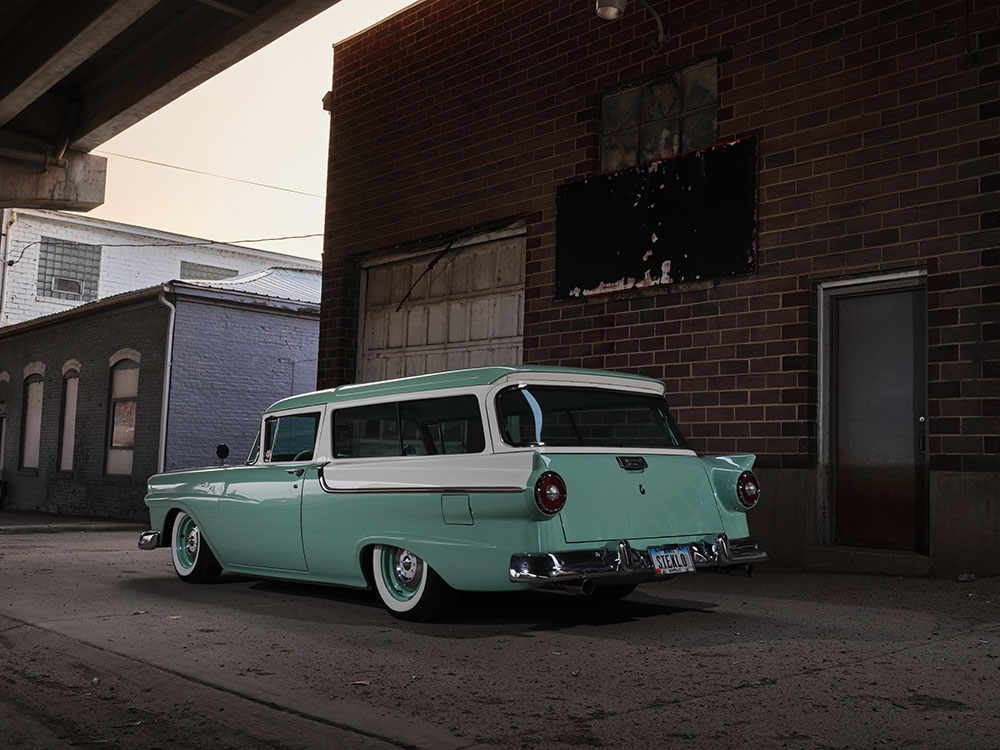 Ken removed the stock dash as he didn’t care for it but was a fan of the 1963-64 Ford Galaxie. He fitted the 1964 Ford dash by narrowing it 5 inches; 1-1/2 inches on the left (driver side) to keep the tilt Ididit steering column in its proper location. On the right it was narrowed 3-1/2 inches and pulled back 4 inches, allowing the corners to “flow” into the door garnish moldings. The factory instrumentation was changed out in favor of Dakota Digital gauges. The windshield area was reworked to accept the Vintage Air defrost ducts, part of the HVAC system. More dash mods included narrowing the glovebox by 1 inch and moving it to the left ¾ inch. The ashtray area was moved 4-1/4 inches to allow for it to be centered. This area now embraces the cruise control switches. Marty Roberts machined the four cones that house the A/C registers. After the numerous hours of fabrication and fitting the dash it was time for Ken to work on the center console. It flows from the dash rearward between the bucket seats. The 1964 Galaxie dash is now padded and shows off stainless trim from a 1957 Ford retractable hardtop convertible modified by Garrett. The speaker is also inset into the padded dash and features perforated holes. 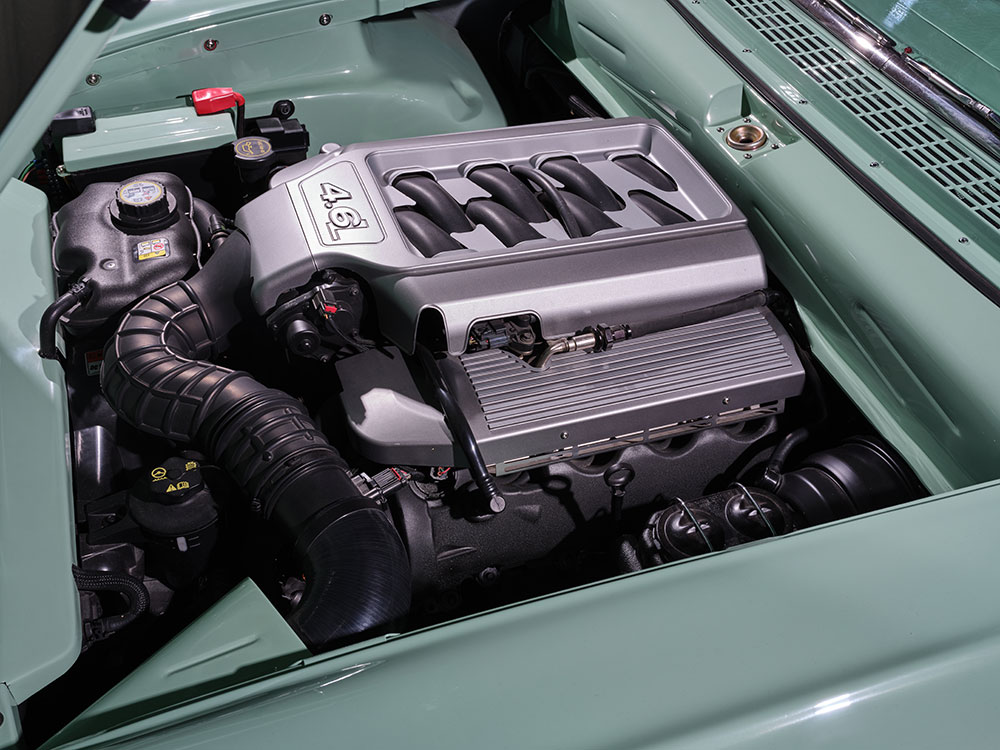 After he designed the look of the console it was up to Roberts to machine the center top plate. The console also houses the hidden Kenwood stereo as well as providing for the Specialty Power Windows window controls (featuring “express down”), lit cup holders, and the gear selection lever. At the time there was no aftermarket shifter for the Ford 5R55 transmission. Ken began with a Lokar shifter intended for a 4L60E transmission and from here modified the detent plate to match the Ford shift pattern. It was then necessary to fabricate the linkage and then fully insulate the shifter housing.

Also note the pair of courtesy lights on the side of the console that are made from modified 1951 Mercury stainless door trim. There are four momentary switches from Watson’s StreetWorks located to the passenger side of the shifter. Starting at the back and going forward: overdrive disengage, beam select (high or low), flash to pass (remember the days when we used to hit the floor-mounted bright light switch?), and far forward the liftgate release when the wagon is in Park or Neutral. The black plastic caps on these switches were then covered with the “chrome” caps from #2 drafting pencils. There are two chrome balls alongside the cup holders that conceal a pair of power ports. 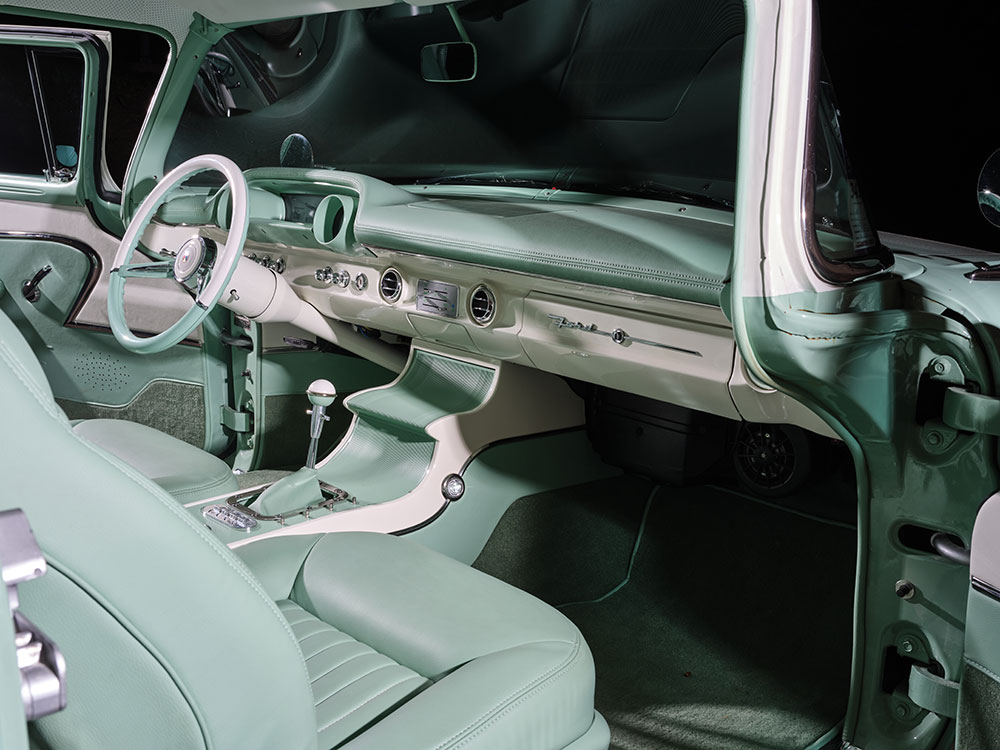 Working off the steering wheel color it was time to find matching material to be used in the upholstery process. Dennis Wilcox and Brett Watertor, both of Accurate Auto Trim and Upholstery, found the matching leather material in Allure, Sage, and Winter White hues. The front buckets are a 1997 Lincoln Mark VIII with 10-way power and “memory” that were redesigned. Next up came the custom rear seating all handled by Watson’s StreetWorks. The carpeting is Sage while the headliner is a white perforated material from MAC’s. The seatbelts are from Juliano’s through Yogi’s. We asked the question, “How many computers?” Ken pointed out the Ranch Wagon is fitted with five computers and 30-plus relays necessitating a custom wire harness placed in position at Ken’s shop. 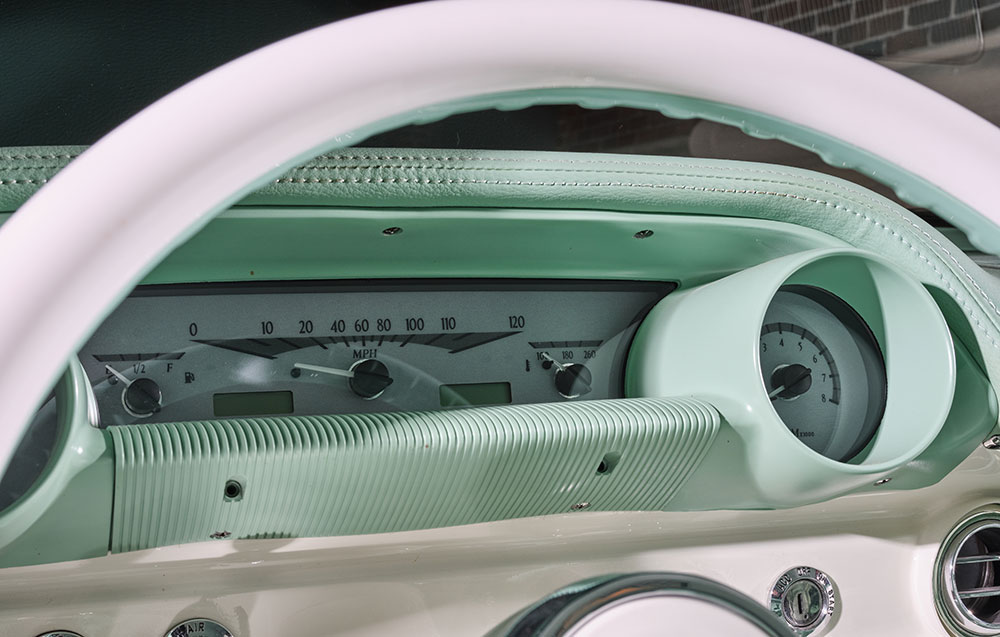 There are a handful of subtle yet worthwhile changes. Ken tells us that the original 1957 Ford two-door Ranch Wagons had a 3/8-inch greater gap at the top rear of the door than at the front. The station wagon didn’t have its own door but rather shared with the two-door sedan. This is a small difference but it’s there. Ken and Garrett jumped in and decided this couldn’t be and the “correction” was made. In the upper cowl area, a newer-style hood latch was grafted yielding a cleaner look. To this the battery and air cleaner feature newly minted covers.

The chassis is based on a stock frame. From here it was modified to accept the Stek-lo Rodz Shop suspension components. A new centersection was modified to accept the 5R55 transmission and to allow the exhaust pipes to pass through the ’rails. The front suspension is based on Stek-lo Rodz Fox platform lower control arms and rack and pinion steering, Mustang 2-inch drop spindles, and Chrysler ball joints with Cordova front shocks. To this a Chassis Engineering 1-1/8-inch front sway bar is used. 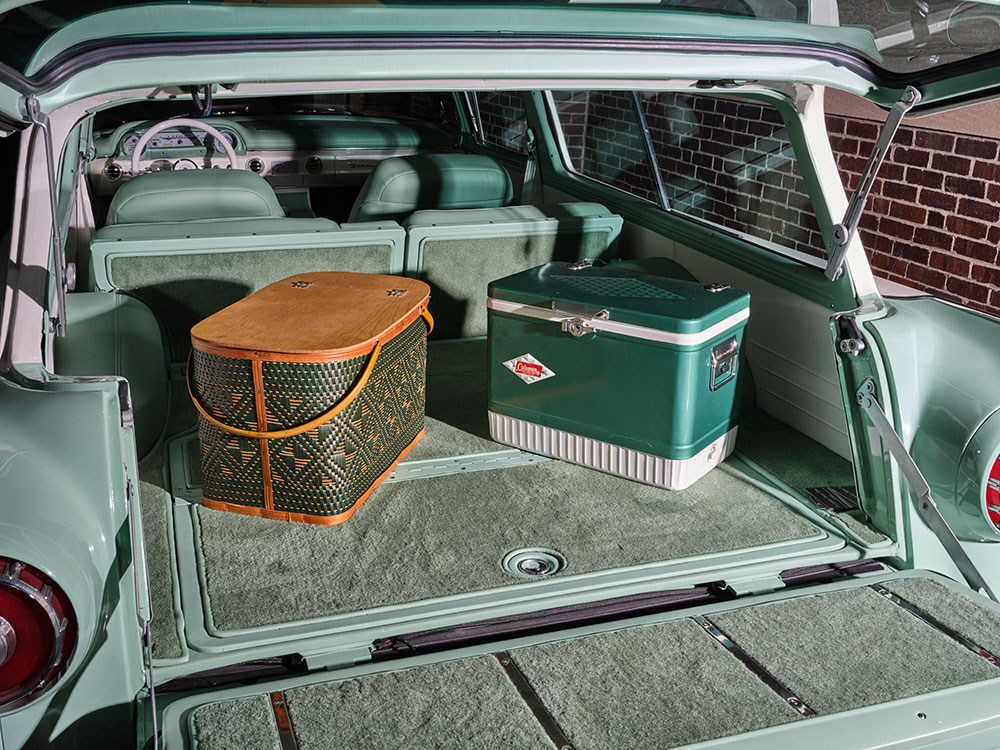 The powertrain comes by way of the 2008 Ford Mustang GT with its 24-valve SOHC V-8 that uses factory exhaust manifolds with Roush Mustang exhaust system and mufflers. As mentioned, the Ford 5R55 transmission and this moves the power back to the Ford 9-inch rear end stuffed with Richmond 3.50 gears. Ridetech air suspension is also used along with AFCO shocks and a Chassis Engineering 1-inch sway bar in back. The braking system is based on a Heidts 10-inch disc brake kit in front and a Speedway Motors 10-inch disc brake kit with integral parking brake in the back. The master cylinder is a Corvette dual reservoir with a custom pedal assembly from Stek-lo. Rolling down the highway effort falls to the Diamondback radial rubber measuring 215R70 with 2-3/8-inch whitewalls at the corners. From here they are mounted to the body color Wheelsmith OE-style 7×15 steel wheels with period-correct Ford block-lettering hubcaps. 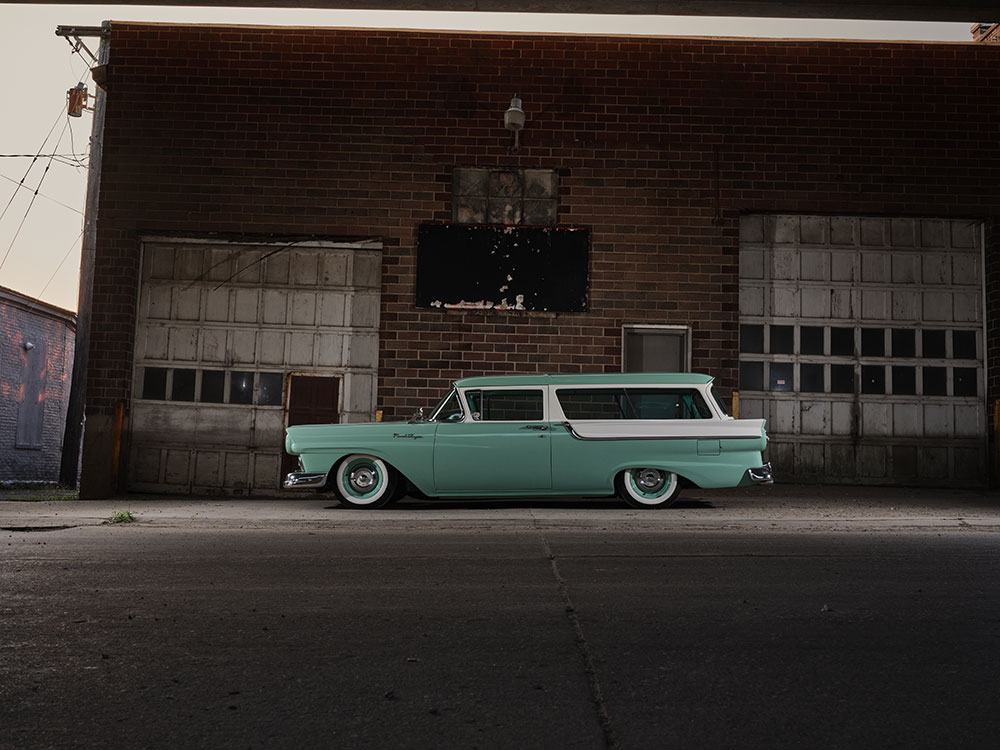