Is It Better To Repair Or Replace A Fender? 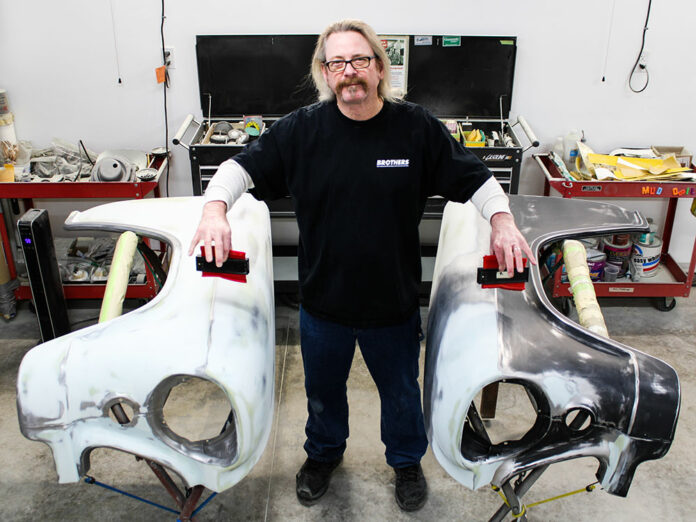 Sure, we can salvage an original fender, but just because it’s possible doesn’t mean it’s practical. For our ongoing 2nd series 1955 Chevy truck project we’d decided early on to salvage as much of the truck’s original sheet metal as possible. In theory, that still sounds pretty good. In retrospect, however, we should’ve focused harder on practicality.

As a crash-damage estimator I’ll admit I’m hit ’n’ miss. After all these (roughly 46) years in the panel-pounding profession, I still have that tendency to underestimate metalworking, as well as filler working, times. Now with embarrassing hours invested, I’ve done it again. I’ve worked way too hard on this truck’s original right front fender.

Over on the other side (the driver side) we’ve abandoned the original front fender and door in favor of reproduction panels from Brothers Truck Parts. At the time of our purchase the brand-new fender was just under $500. Even though shipping (to Montana in our case) might’ve cost about as much, it might’ve still been the better deal.

Since our project truck will be running both new-reproduction and used-original fenders, we have an opportunity to compare cost, quality, and perhaps, most importantly, that practicality we’ve been talking about.

While we’ve been working on other panels (cab, hood, inner fenders) we thought our front fenders were stored safely enough against the body stall wall. The used fender has already been abrasive-blasted and, for the most part, roughed-out metal work was done during mockup when the truck’s front group was last screwed together.

At the time of this typewriting one dent remains in the used fender’s eyebrow. With that fender secured to a portable work stand, we can access the dent’s backside more easily now.

So, from the big brown corrugated-cardboard box, is our new-reproduction fender ready for the paint department? By this shop’s standards, no, but it’s seeming to be close.

Perhaps like you, we hear other builders’ complaints regarding reproduction panel fitment. We’re always open-minded and willing to listen to those who’ve fought those types of battles. All we can tell you here is, to this point, on this job, we’re not having their exact same difficulties. Even so, let’s leave a little room for surprises.

Soon you’ll see it anyway, so I might as well fess up to a little boo-boo—something that occurred months ago during our panel-alignment marathon. Back when we were going for gaps, the brand-new fender’s upper-rearward edge seemed low where it met the beltline edge of the door. Plopped atop the cowl a single body shim made the needed difference, but not before I’d hastily employed a Keysco leverage bar. If by chance you’re unfamiliar, that’s an age-old body shop tool—and it’s ordinarily my friend!

Not to distract too much from my own personal goofs, but do you ever get the feeling you’ve been somewhere before? Somehow it seems as though we’ve touched on the necessary fillerworking subject here—not so long ago. This time, rather than expounding deep technical details, let’s just focus on the aforementioned practicality. New versus old—let’s consider this a time-is-money comparison.

Back in the ’70s, as painter’s helper at my first real job, the head painter there said this for the black coating that came on new OEM body panels: “That’s good primer! You can scuff ’n’ paint right over it.” A few years later, at another shop, I was retrained differently: “Unless we start from bare metal, there’s no guarantee.”

Like new OEM body panels, our new Brothers reproduction fender arrived with an E-coat or, if you prefer, an EDP (Electro Deposit Primer) coating. We think that description is a little vague as the terminology doesn’t state what the coating is actually composed of. If by chance it’s thermoplastic (lacquer-like by nature) it should be removed. To determine our E-coat’s substrate suitability there’s an easy test. As we turn our attention to the new fender, let’s begin with a little demonstration.