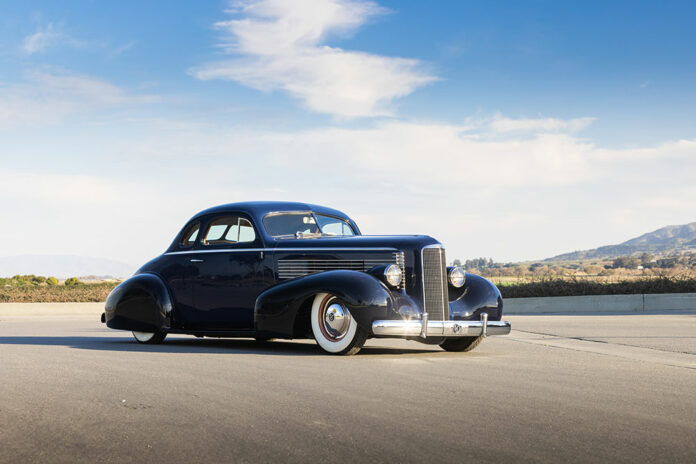 Customs designed and crafted today are a far cry from the customs of the ’60s yet each has its place in our world. Garrett Jedlicki of Minnesota is no stranger to the world of hot rods or custom cars, and neither is his association with Cole Foster of the Salinas Boys Customs. As such, it shouldn’t come as a surprise that the pair teamed up once again to test their “limits.” The result is the ’37 Cadillac LaSalle Opera coupe done in a modern custom car approach. 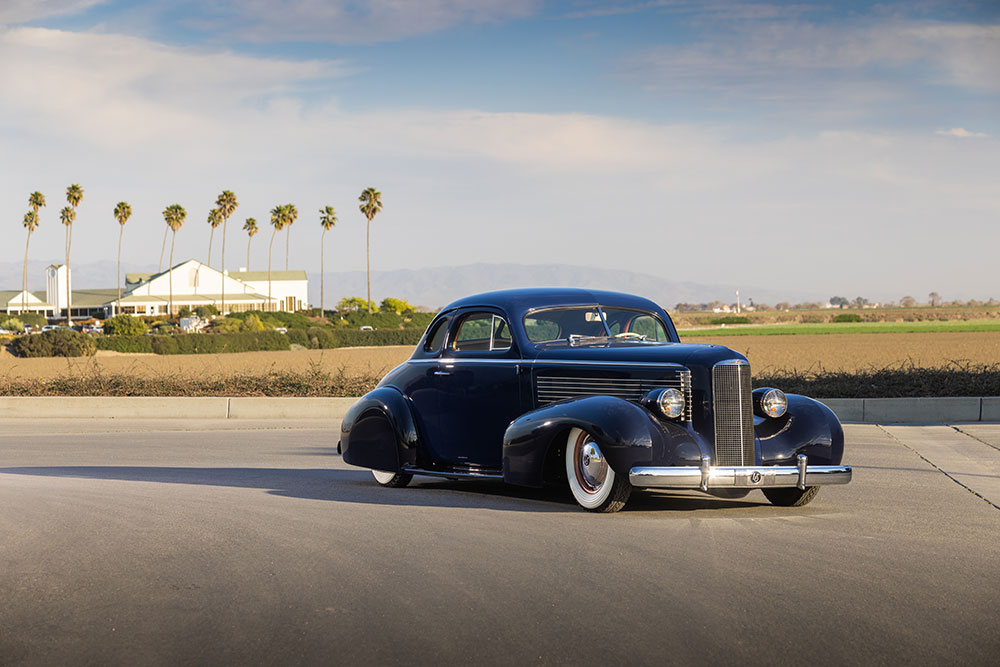 (A few years back Foster built a traditional ’32 Ford roadster highboy for Garrett, complete with an ARDUN-powered Ford Flathead V8. Simple in its approach yet exceptional in its result.)

Read More: While you are here…A 1939 Mercury Custom Sedan 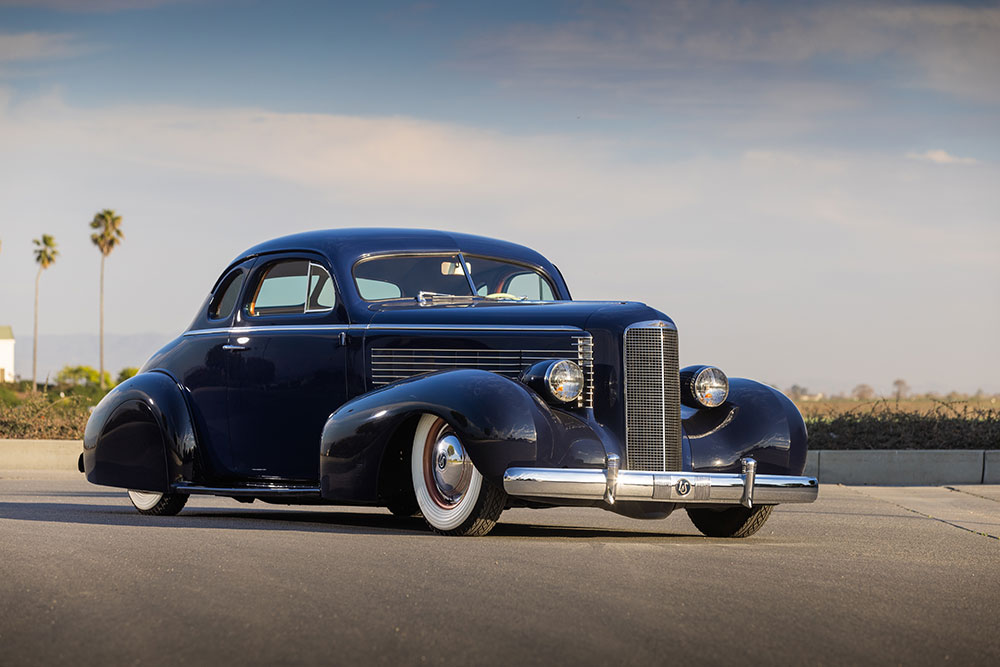 Garrett had his heart set on the Series 50 while Foster was harboring more of a ’40 Merc feel. In time, Foster grew to see that much could be done with this successful ’30s car by bringing his ideas to the forefront in making this a modern-day custom. Because of the inherent trust each had for the other, the geographic “undesirability” proved not to be an issue. Foster proudly stated, “Let me do my thing without red flagging me.” 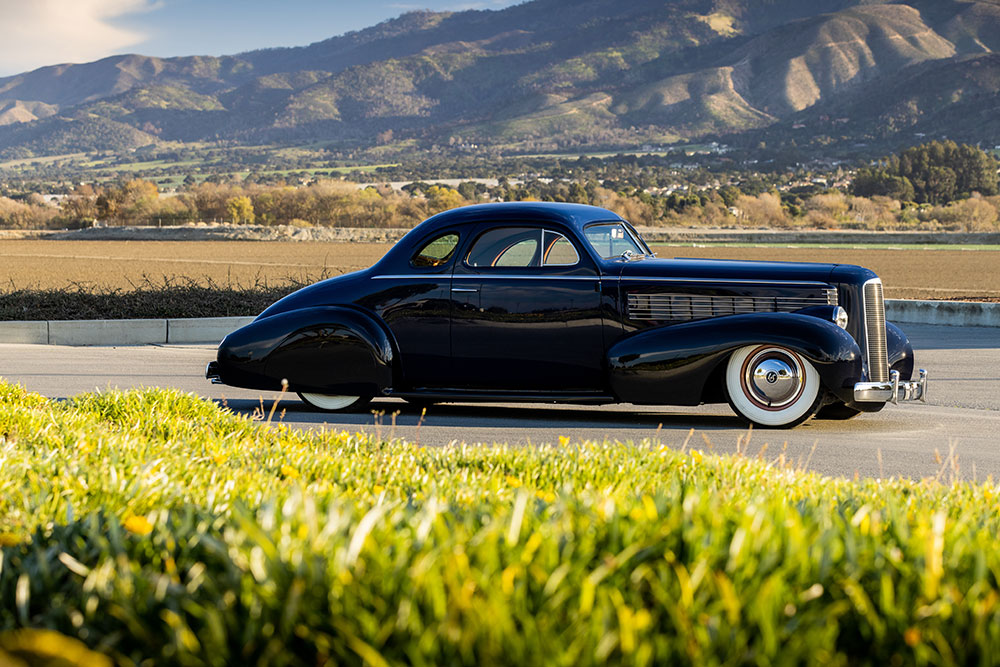 La Salle was an American luxury brand part of the Cadillac Division within GM. It was marketed and sold through Cadillac as a separate brand from 1927-40. It was 1937 and the LaSalle marked its 10th year under the Cadillac nameplate. The LaSalle received a totally new front-end treatment and its wheelbase was stretched to 124 inches. 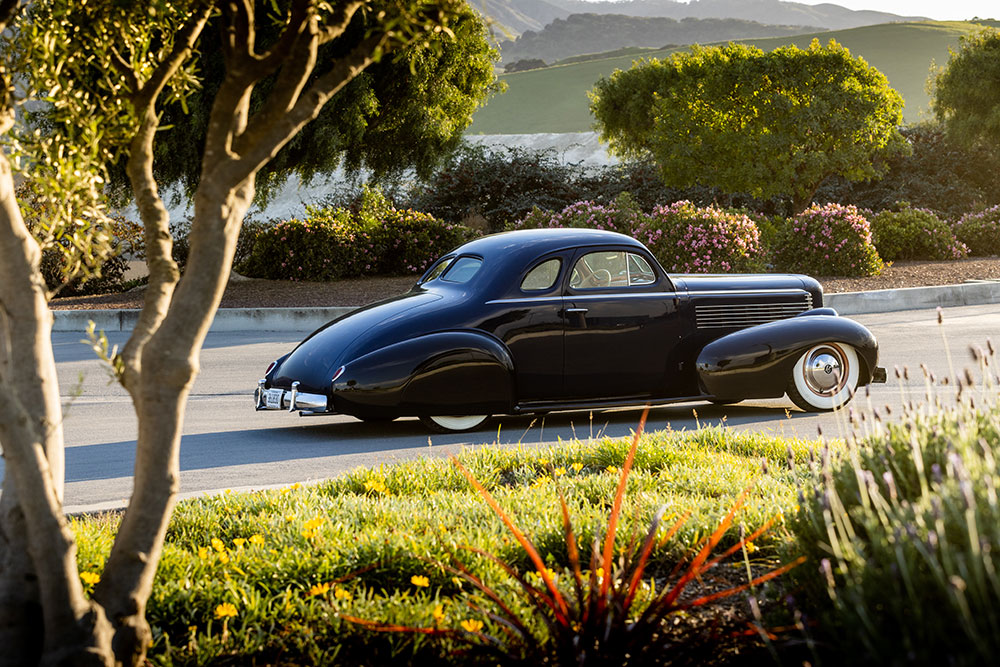 In Foster’s mind, he didn’t want to change the LaSalle for change’s sake but rather “… take away aspects of the car that I thought was out of place or proportion. …” Working from this viewpoint it was decided that a mild chop, 2-3/4 inches, would be taken out of the roof. The flush rear fender skirts added 2 inches to the wheelbase while the reshaped front wheel wells and the lowering of the headlights, by almost 6 inches, gave Foster the look he was after. The Salinas Boys–fabricated running boards were designed to bridge the gap and give a “look” between the front and rear fenders. In doing so the visual made the profile the low front-to-rear view Foster was after. Other subtle but worthwhile modifications included the shaved trunk lid and the new taillight bezels that surround the N.O.S. Plymouth taillight lenses. 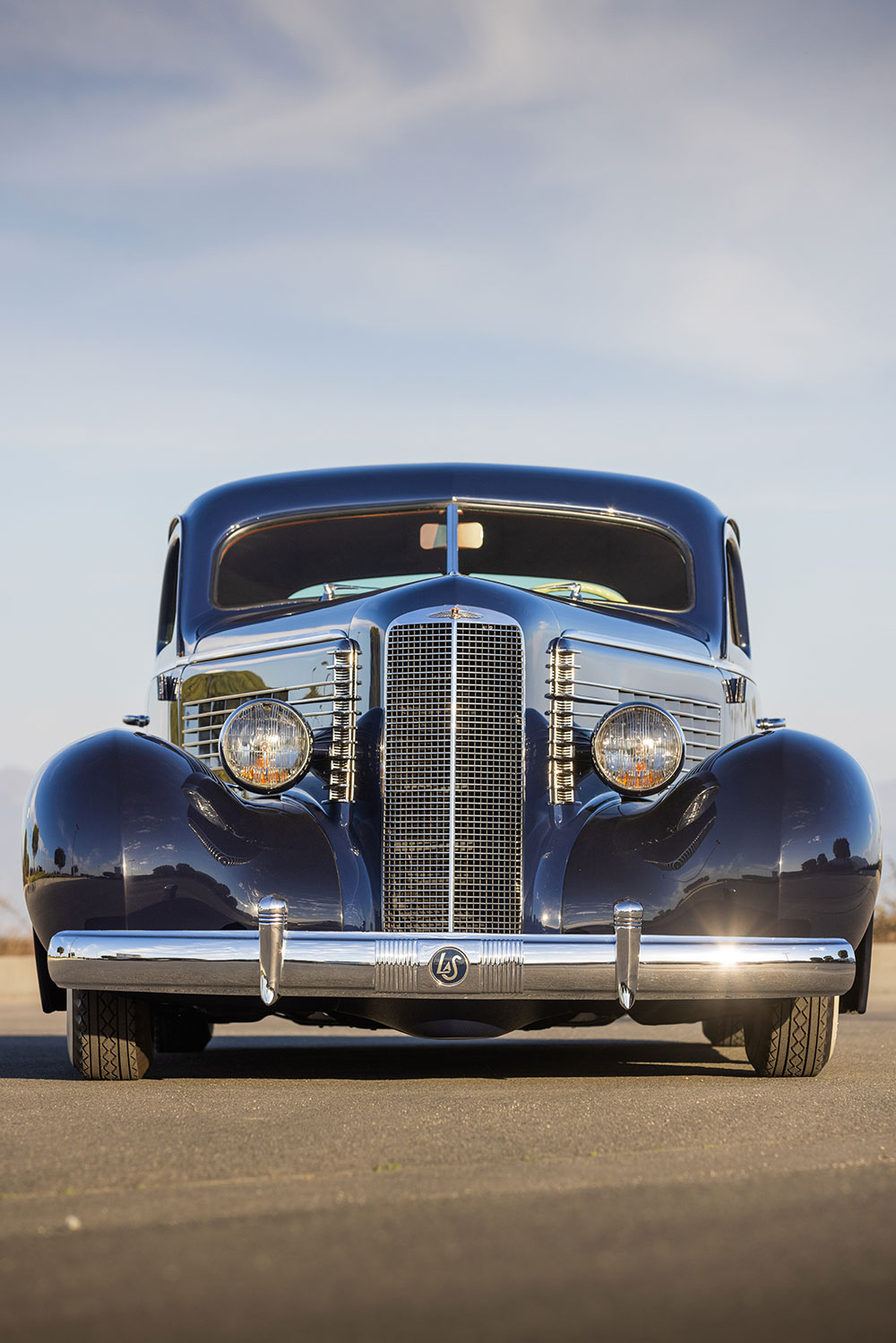 Also in 1937, the LaSalle egg-crate grille became noticeably restyled with a deeper and narrower look. The new grille shell also added to the appearance of the new windshield that featured a 24-degree sloop. The new, for 1937, six rows of horizontal louvers on the hood were retained by Foster in the final build. 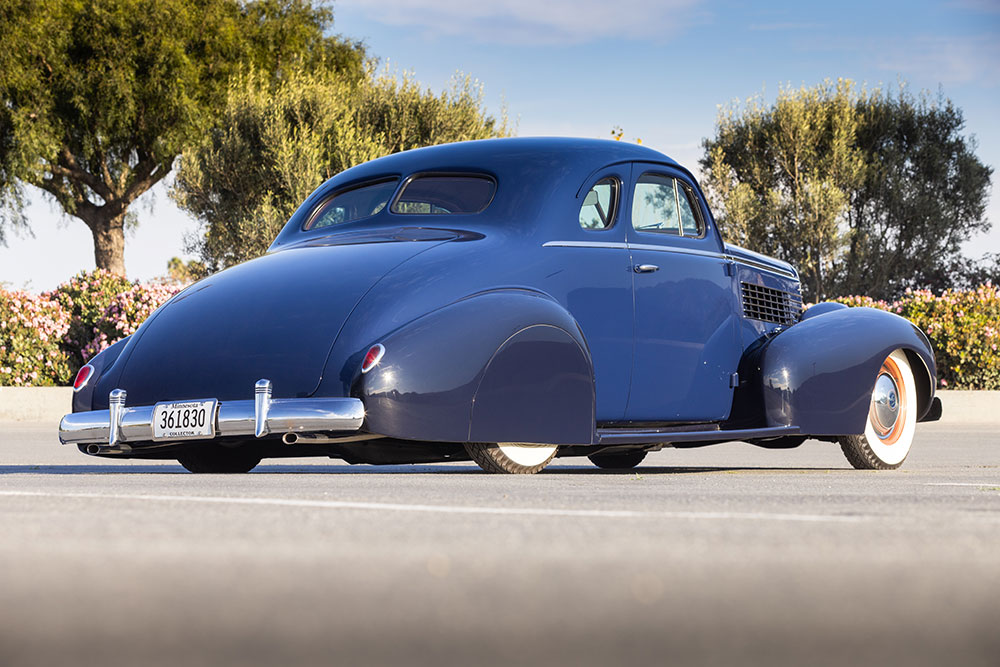 Foster handled the bodywork and at this point the car was taken across town to Matt Sherman to spray the two-tone House of Kolor paint. Look closely and you will see the body, while a deep blue, is lighter in tone then the darker blue fenders and running boards.

We have noticed over the years that the truly great builders understand what they do well (probably better than others) and where they could use a “little assistance.” The ’37 LaSalle would be no different. 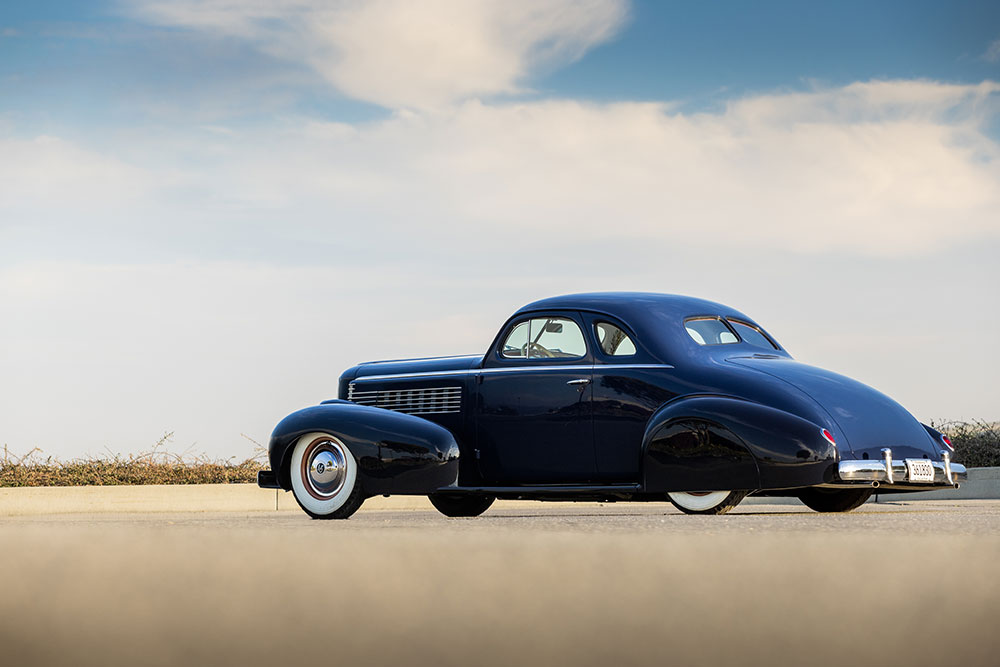 The chassis project was turned over to Chad Gravelle, longtime friend of Foster and an accomplished race car fabricator. According to Foster, “… Gravelle built this really beautiful chassis with sweeping rear framerails and a long-arm truck-style links with his own frontend with rear steer suspension.” He used Mittler Bros. HydroShox at the corners, allowing the ’37 LaSalle to ride at the height it is set. The suspension controller rests under the passenger front fender while the battery rests on the drive front fender. A two-piece driveshaft was also used, allowing for the sheetmetal tunnel to be minimal, leaving additional floorspace. In back, the suspension is based on a Speedway Ford 9-inch rear end, Wilwood six-piston caliper disc brakes (front and rear), and the rolling stock is stock wheels and caps with Goodyear Tires 16×7.00 rubber. 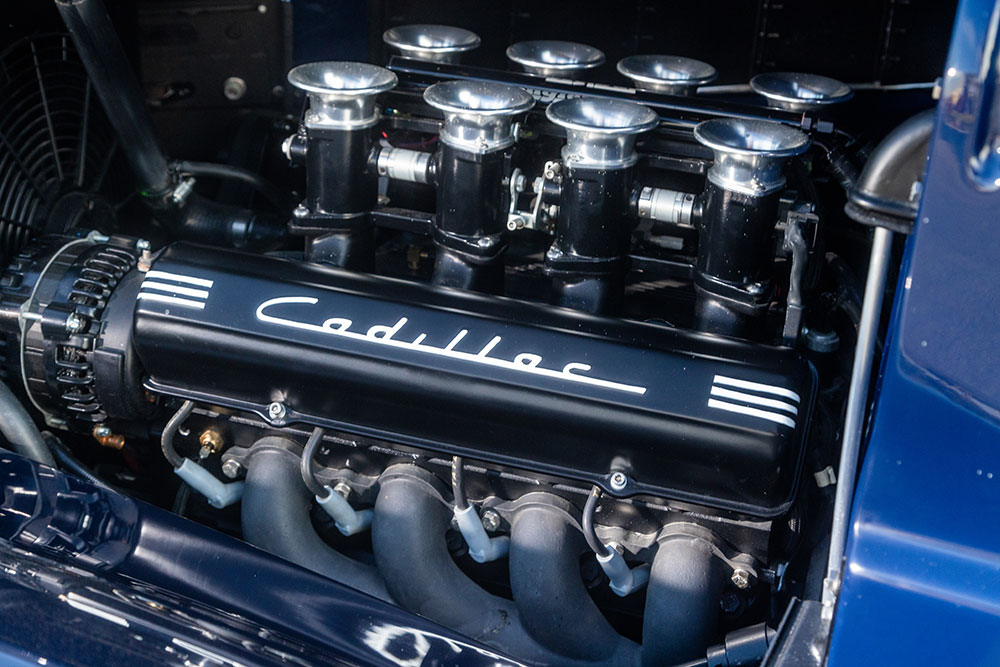 Power for this custom wash was handled by a late-model LS engine in the form of an LS6 built by Garret and company and then shipped to California in a stained black finish. The V-8 sports Inglese EFI and Cadillac valve covers. The LS6 engine is hooked up to a 4L80E trans.

Read More: All about the AMBR-winning 1934 Chevy roadster and its LS Engine 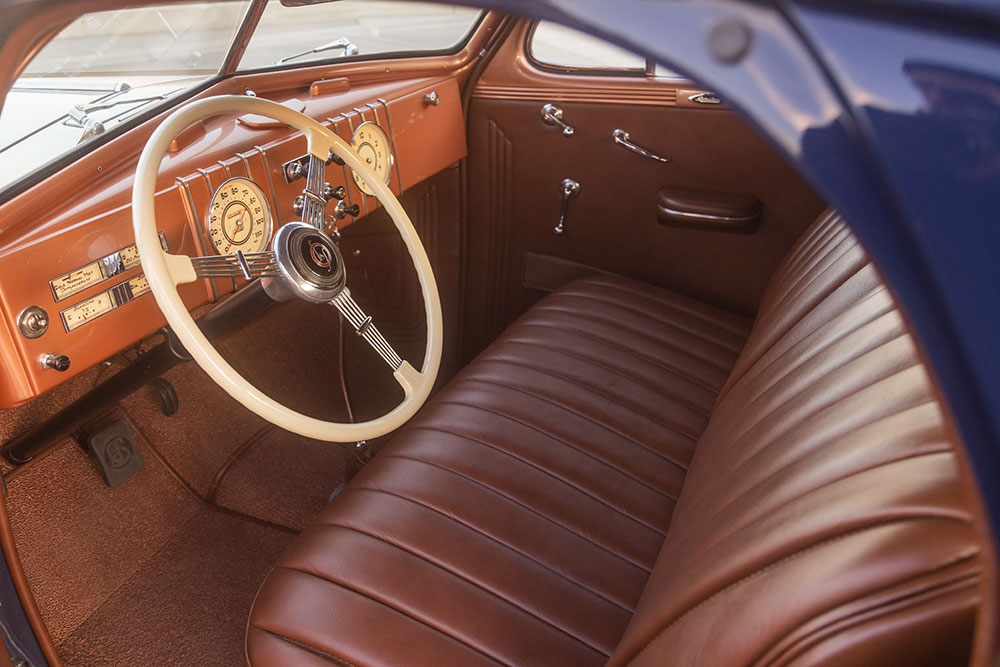 The interior is based on a stock dashboard with stock gauges restored/updated by Redline Gauge Works. Following is the stock steering column and wheel. Next to the stock column are the original pedals that were modified at the Salinas Boys shop. Chris Plante of Plante Interiors took the stock front and back opera-style seating and covered them in a deep stuffed brown leather pleat. Additionally, Plante also stitched a reverse-seam headliner along with a coral carpet. 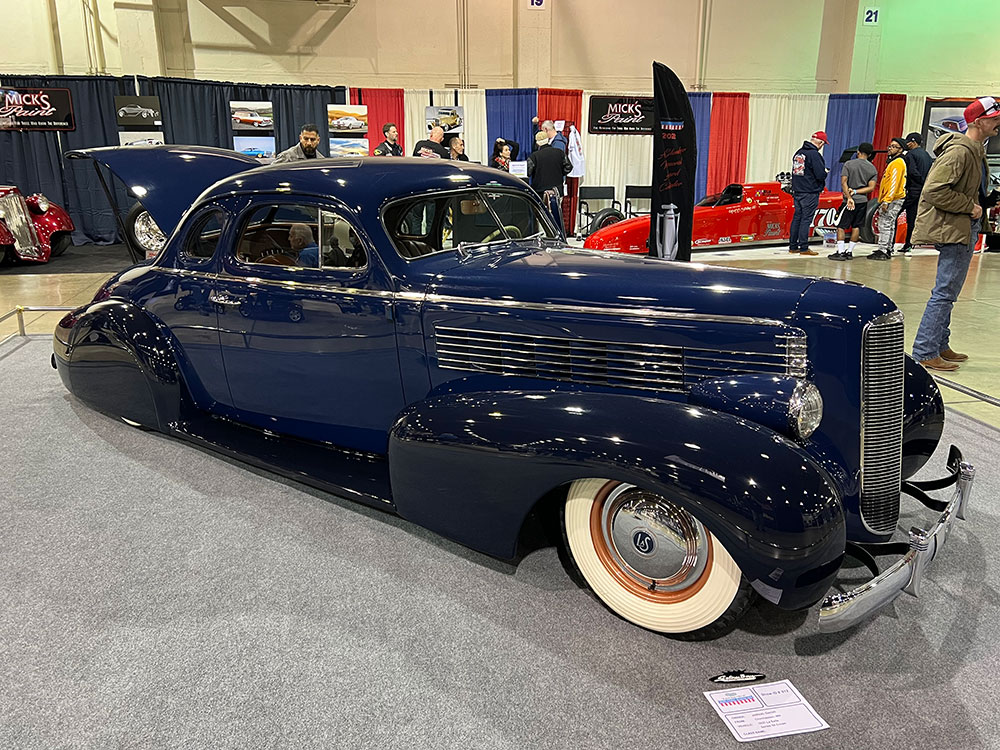 The car made its initial appearance at this year’s Grand National Roadster Show and was listed in the Slonaker competition. Both Garrett and Foster were comfortable knowing they weren’t showing the LaSalle as a serious competitor but entering the car would be fun. In fact, the low-slung display piping was borrowed by Foster’s fellow hot rodder friend Jimmy Shine. In the conversations we listened to there were many who thought LaSalle made a strong statement. MR