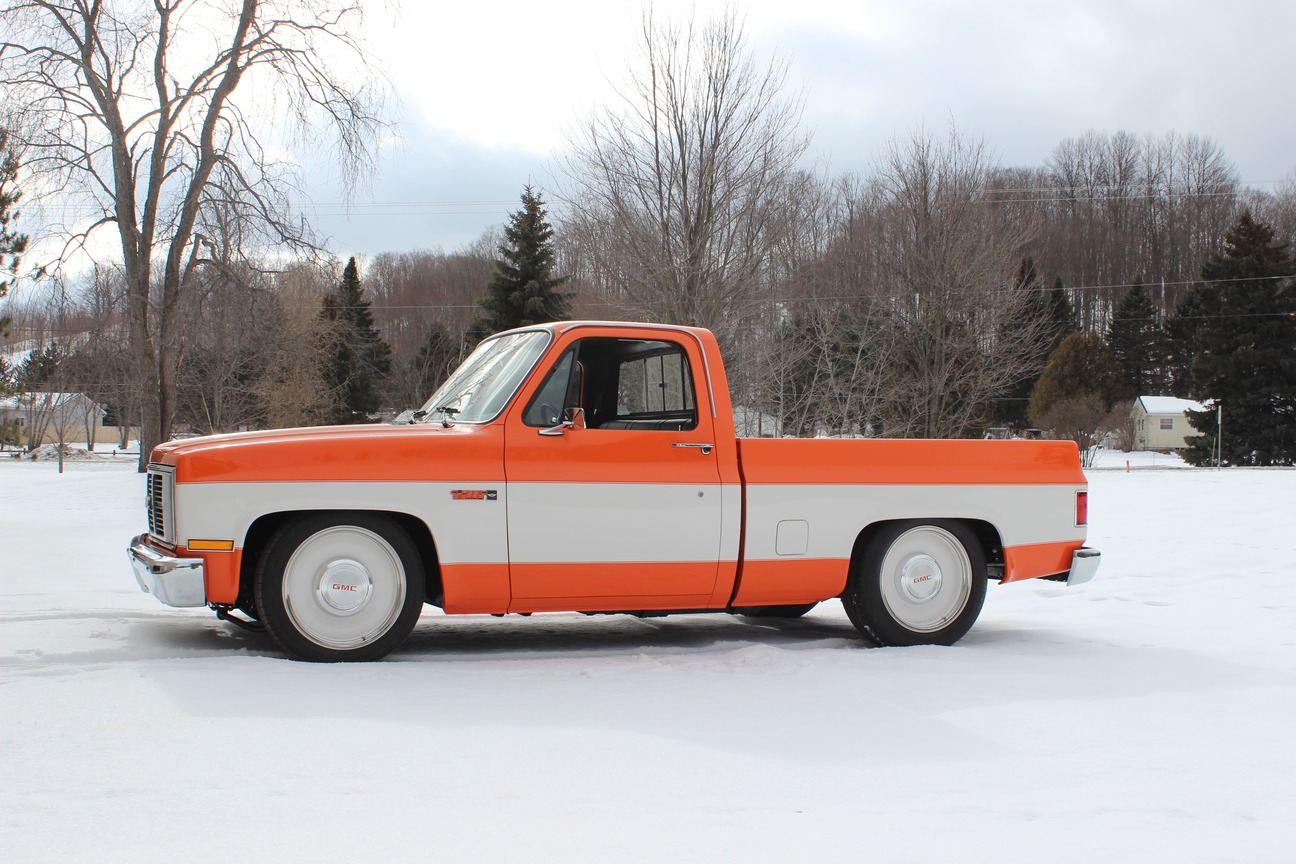 By Ron Ceridono – Photography by the Author

There’s no question that 1973-1987 Chevy square body trucks are gaining in popularity among the Bow Tie brigade. Generally referred to as a “square body”, these trucks are good looking, readily available and are a bargain compared to the price tags usually found on their 1967 to 1972 brethren. But while these haulers are cool, like most pickups of the era they can benefit from suspension upgrades. That’s the domain of Detroit Speed and its QUADRALink suspension on 1973 to 1987 Chevrolet C10 square body pickups.

Kyle Tucker, president of Detroit Speed, has loved race cars since elementary school. That passion led to a degree in mechanical engineering and a job working at the GM proving grounds. Kyle worked initially as a test engineer gathering data acquisition on the Corvette program and later in suspension development. Then, in 2001, the corporate world was left behind and the doors of Detroit Speed were opened. As you might guess from the name, it all started in Detroit, what may not be so obvious is those doors that opened were on a two-car garage. However, it didn’t take long for the business to gain a reputation for offering the finest high-performance suspension components and as a result today Detroit Speed is housed in a 40,000-square-foot facility in Mooresville, North Carolina. All of Detroit Speed’s suspension systems are designed by highly qualified engineers and built by fabricators using state-of-the-art manufacturing technologies.

In addition to the wide variety of suspension parts offered for cars, Detroit Speed has expanded its offerings to include Chevy trucks. The latest is the 1973-1987 GM C10 QUADRALink rear suspension kit, the ideal way to upgrade from the stock rear suspension. The QUADRALink system’s geometry offers the best possible handling while the patented Swivel-Link trailing arms eliminate bind allowing the rear suspension to fully articulate without the use of noisy spherical rod ends. The Swivel-Links also allow easy pinion angle adjustment for improved traction and lower driveline vibrations. The links also include high-durometer rubber bushings on either end. The adjustable Panhard rod provides precise and effective rear axle lateral location. Also included in the kit are coilover shocks and springs, C-notch reinforcements for the frame, and all necessary hardware and templates for installation.

Once the stock rear suspension components are removed, installing the QUADRALink components is straight forward. We were able to follow the process on a Square Body belonging to John McLeod of Classic Instruments. The first step is normally modifying the frame rails and installing the C-notch plates. However, John’s truck had been lowered in the past, so the frame rails had already been modified. In this case it was simply a matter of drilling a few holes and bolting on the Detroit Speed suspension components.

Detroit Speed’s QUADRALink system offers a long list of advantages including a better ride, adjustable upper shock mounts to alter ride height and noticeably improved handling. Check out the following photos to see what it takes to provide your Square Body with the ultimate underpinnings. MR

Chevy’s 1973 to 1987 Square Body pickups are growing in popularity. They’re good looking and with help from Detroit Speed the ride and handling will make you forget it’s a truck. 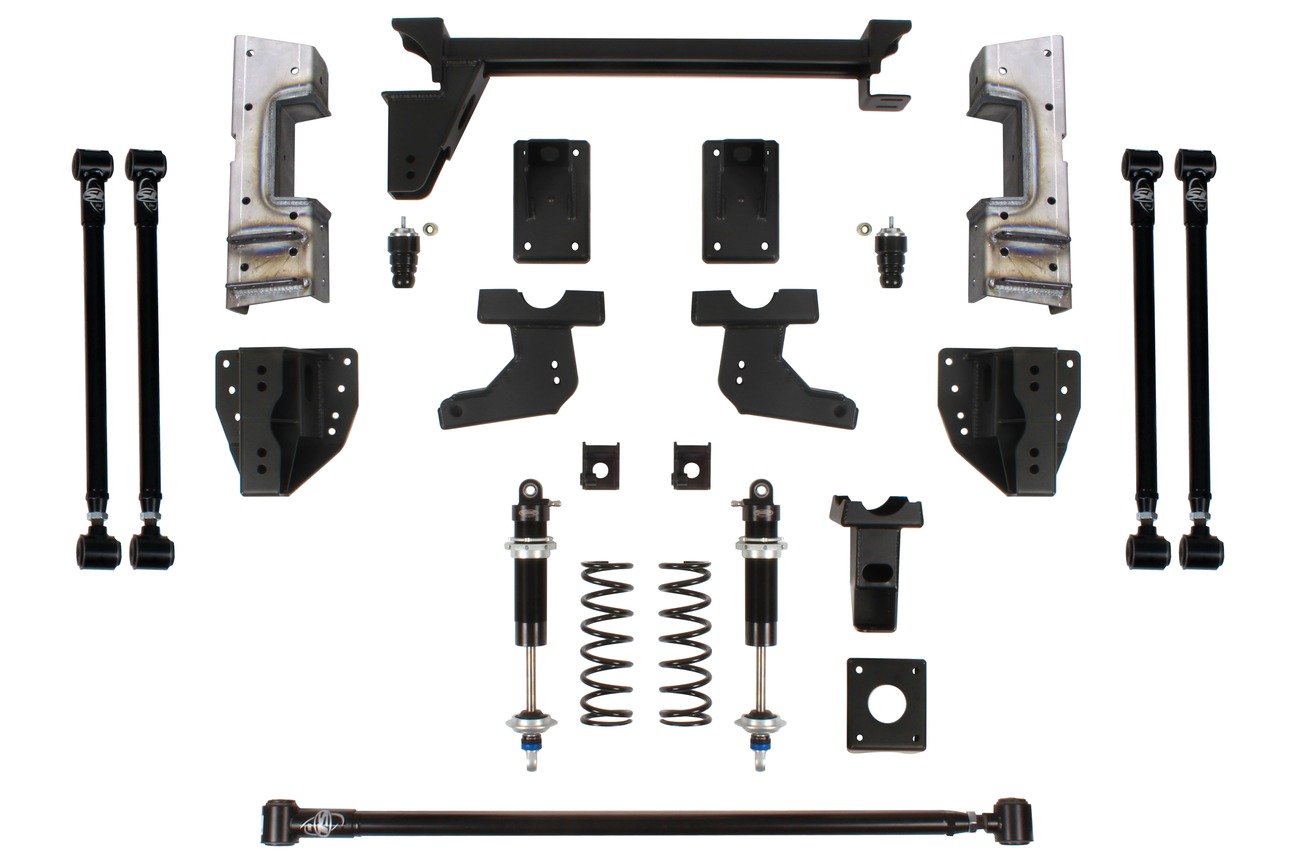 Detroit Speed’s QUADRALink kit comes with everything necessary including quality fasteners and detailed instructions. Kits are available in bolt-on and weld-on applications. An installation video can also be found at DetroitSpeed.com. 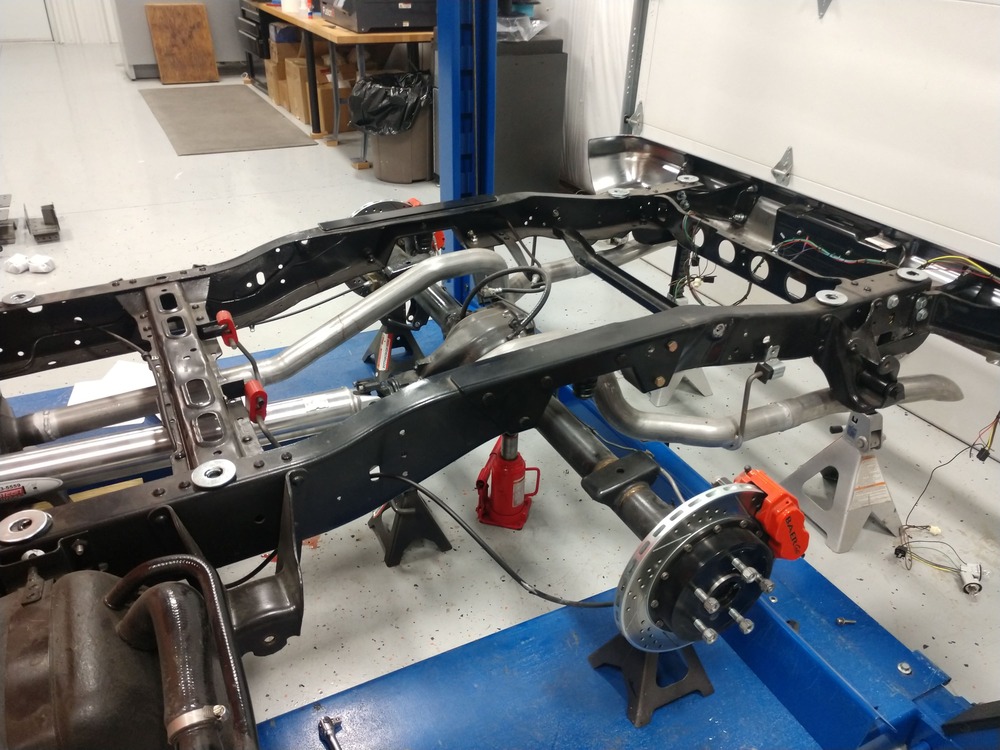 With the frame and rear axle supported on jack stands the springs and shocks were removed.  Note the previous C-notch reinforcements are in place—they will be removed. 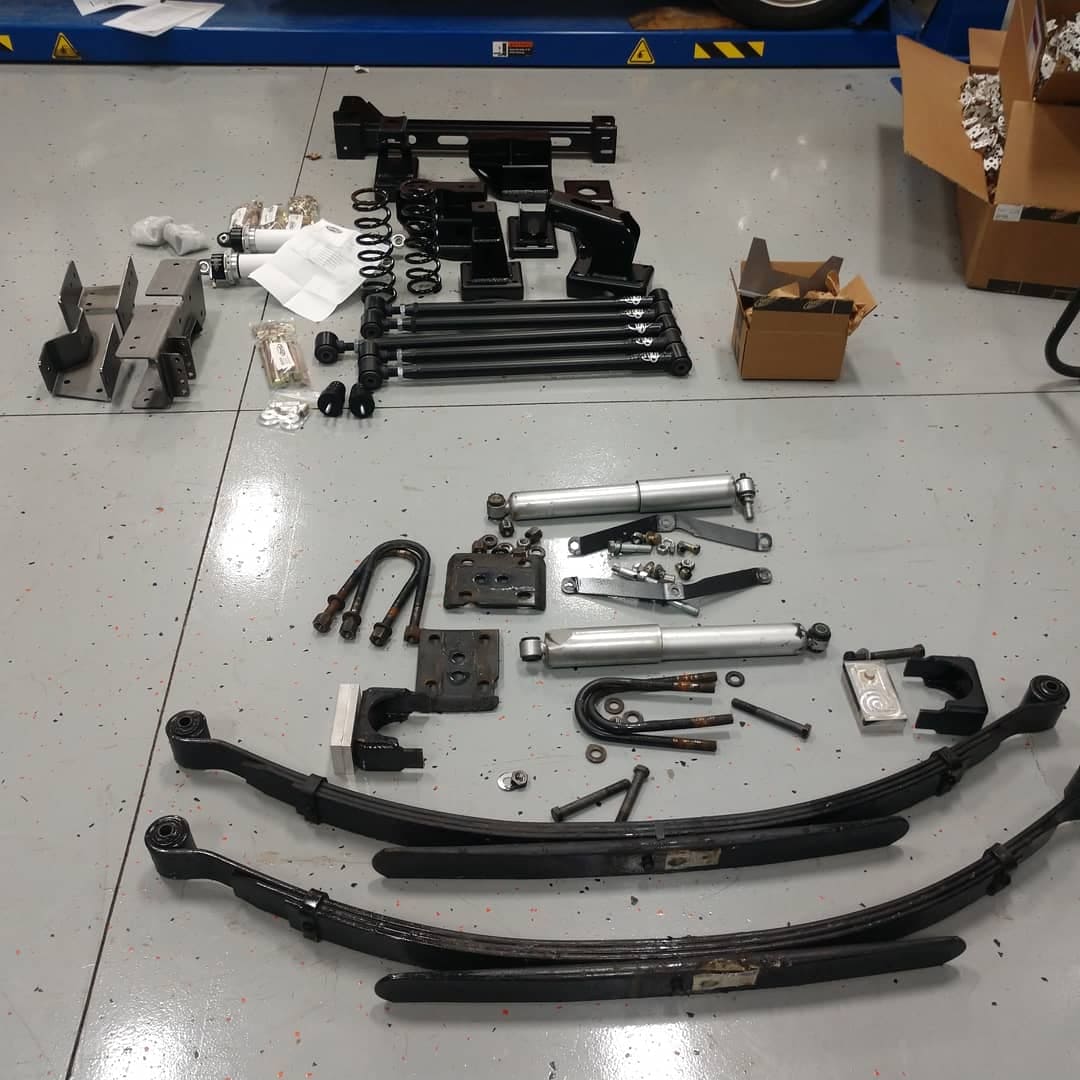 In the foreground are all the original suspension parts that were removed. 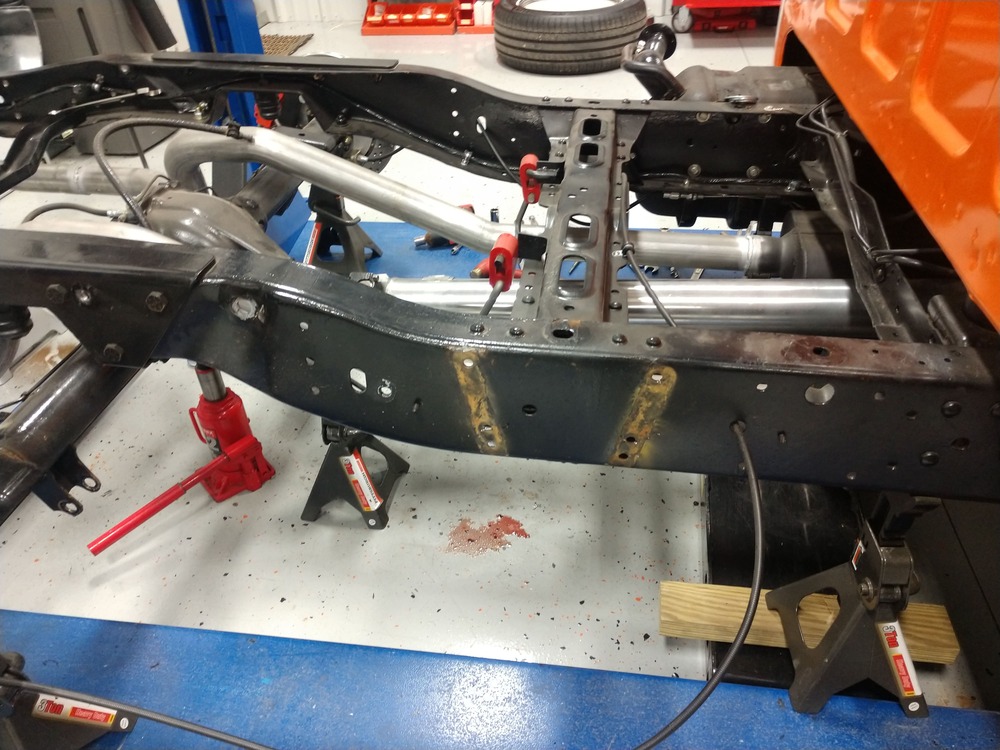 The front spring hangers on both sides are removed by drilling out the factory rivets. 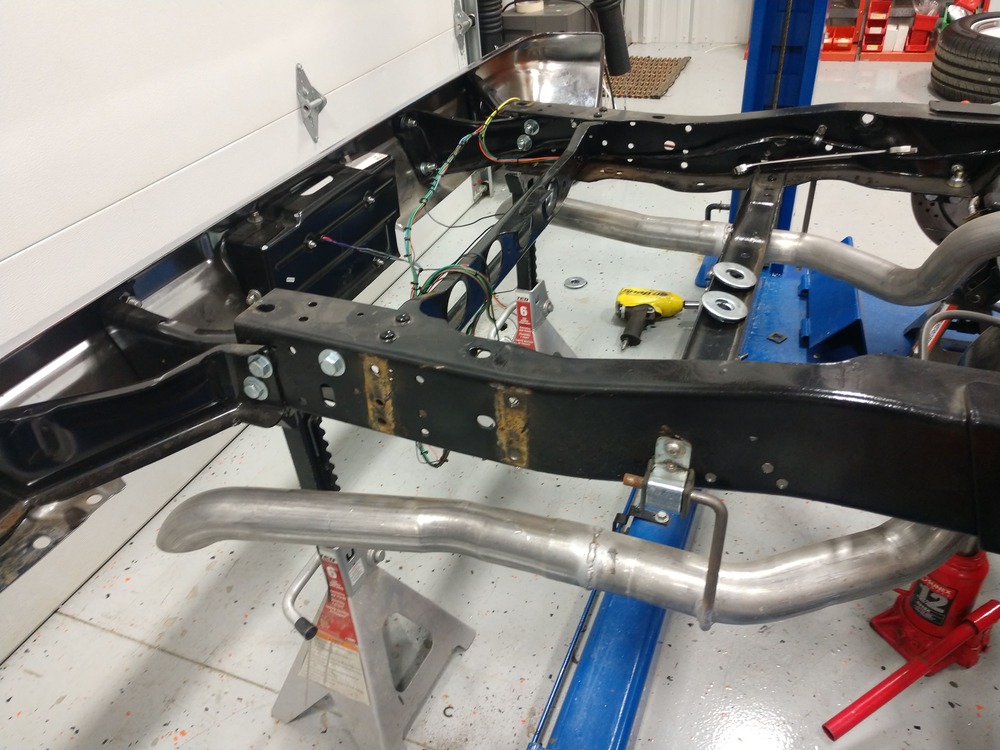 Both rear spring hangers are removed using the same process. 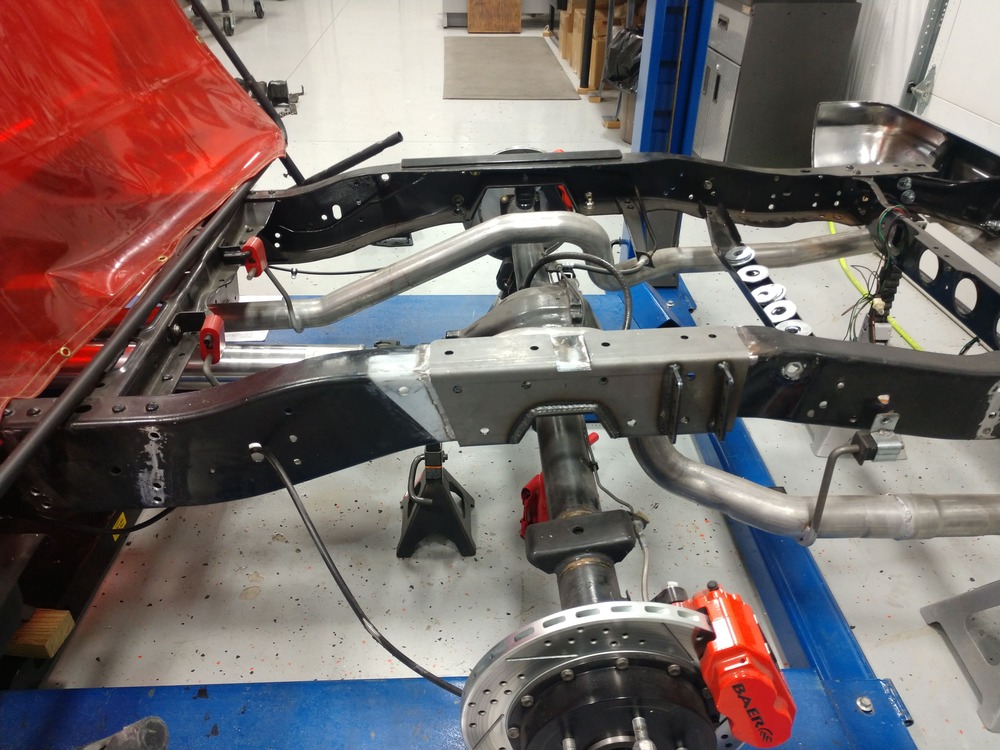 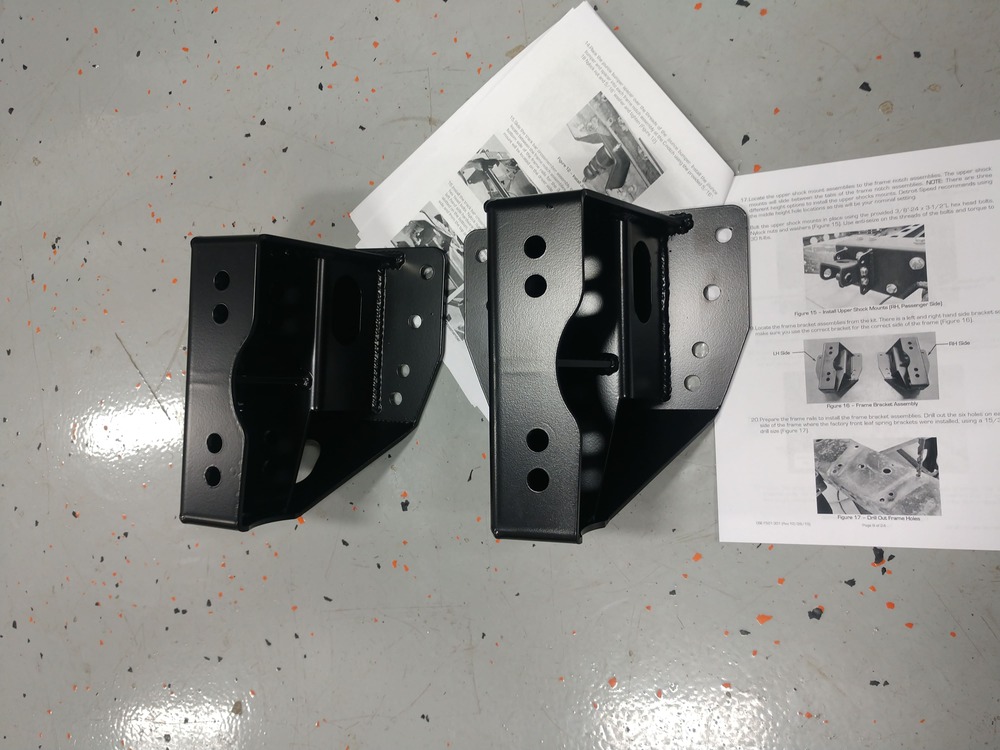 These are the front Swivel-Link™ brackets. They come powder coated and use six of the original holes for the leaf spring brackets. 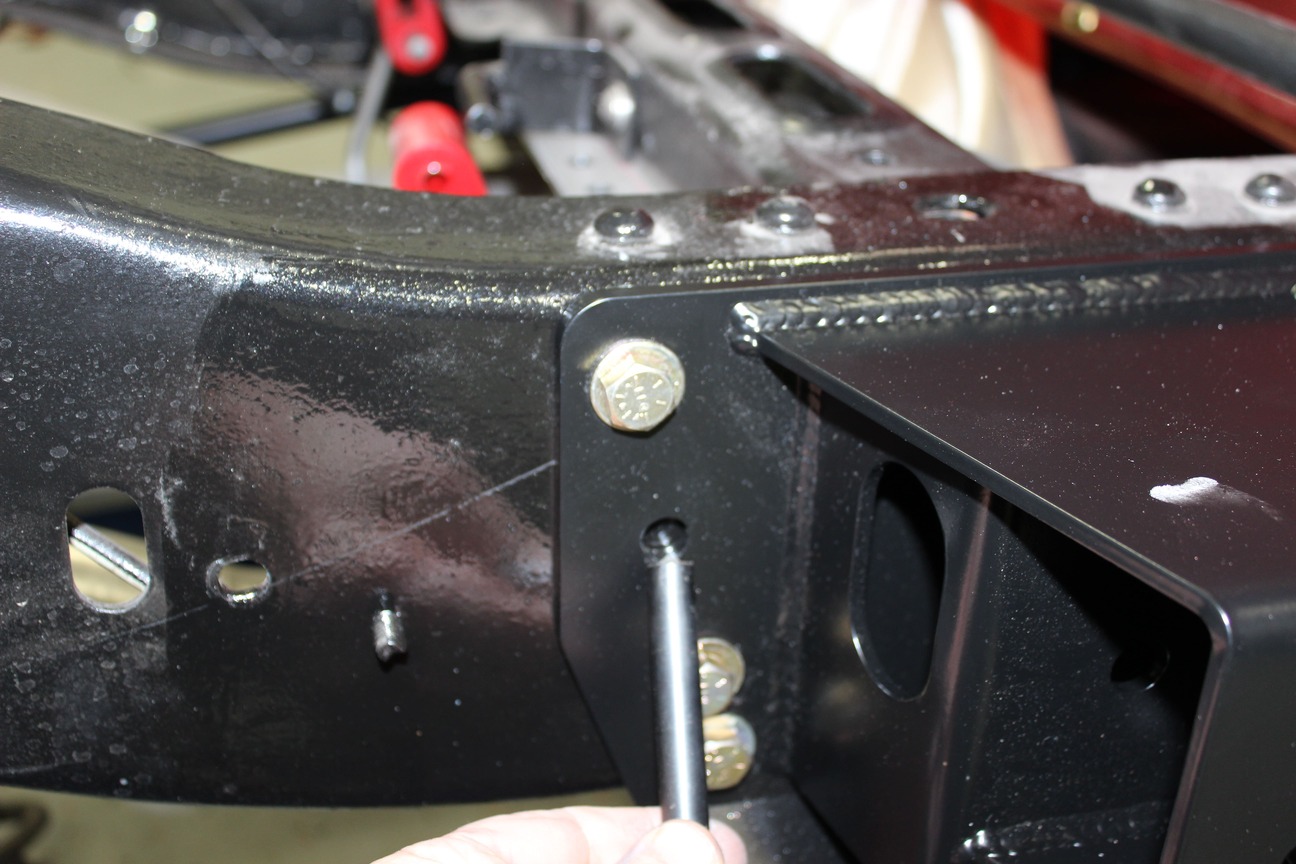 The existing spring bracket holes are drilled larger (15/32-inch) to accept 7/16-inch fasteners. With the bracket bolted in place a transfer punch is used to mark two new holeson each side. 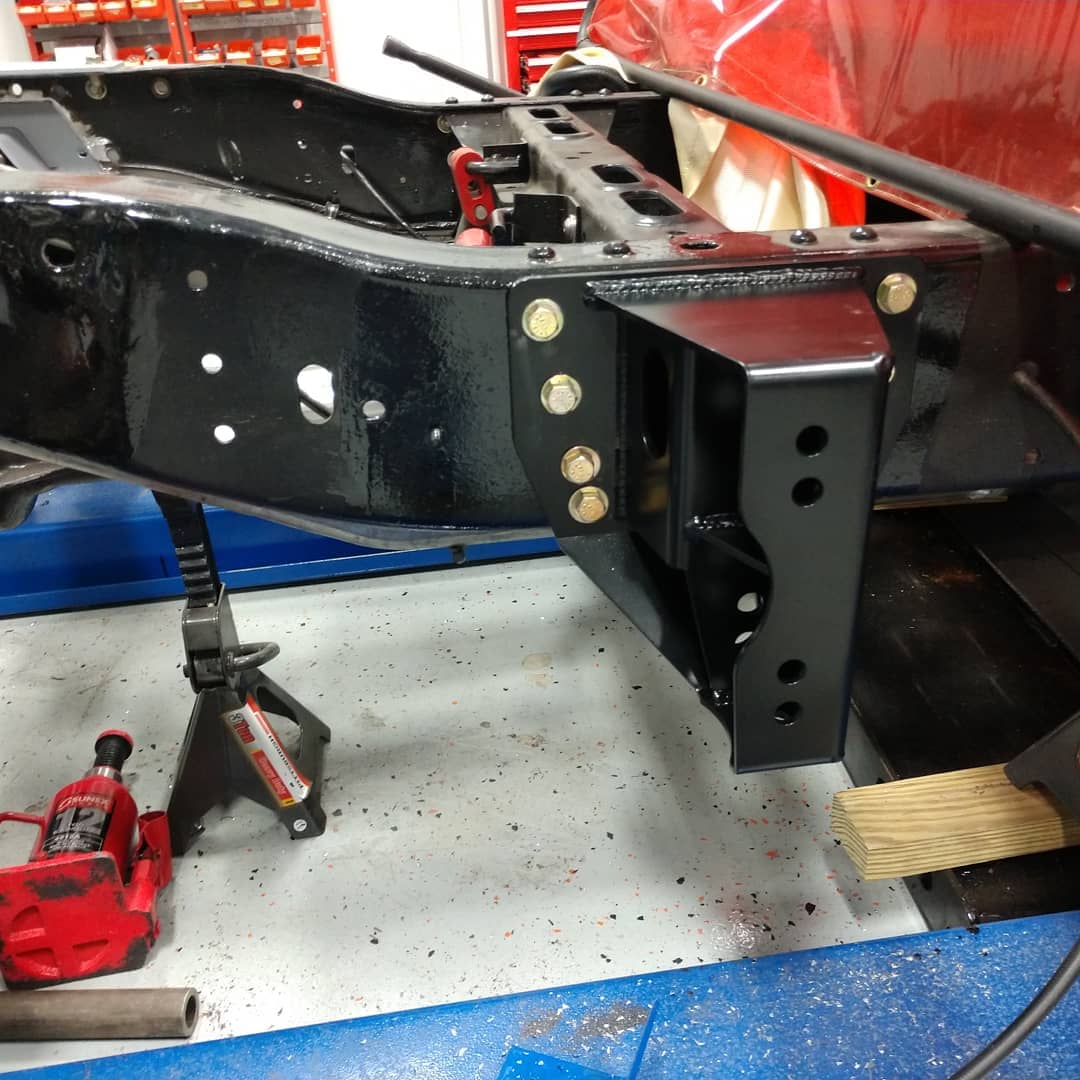 With the new holes marked and center punched it’s simply a matter of drilling them to size and installing the remaining fasteners. 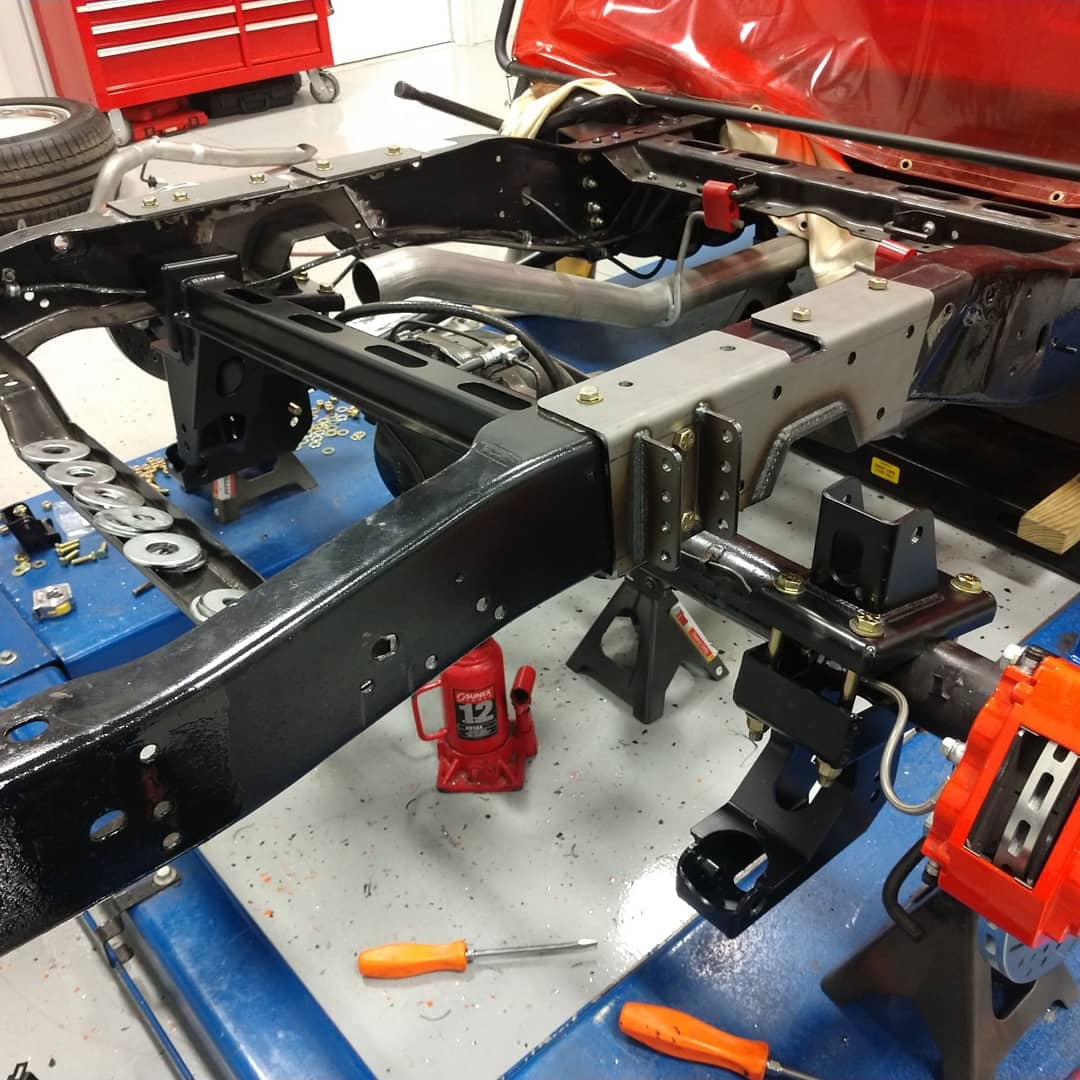 After cutting off the stock shock brackets the upper and lower QUADRALink brackets are installed. Pins on the bottom of the upper brackets register in the center-bolt holes in the original leaf spring pads. 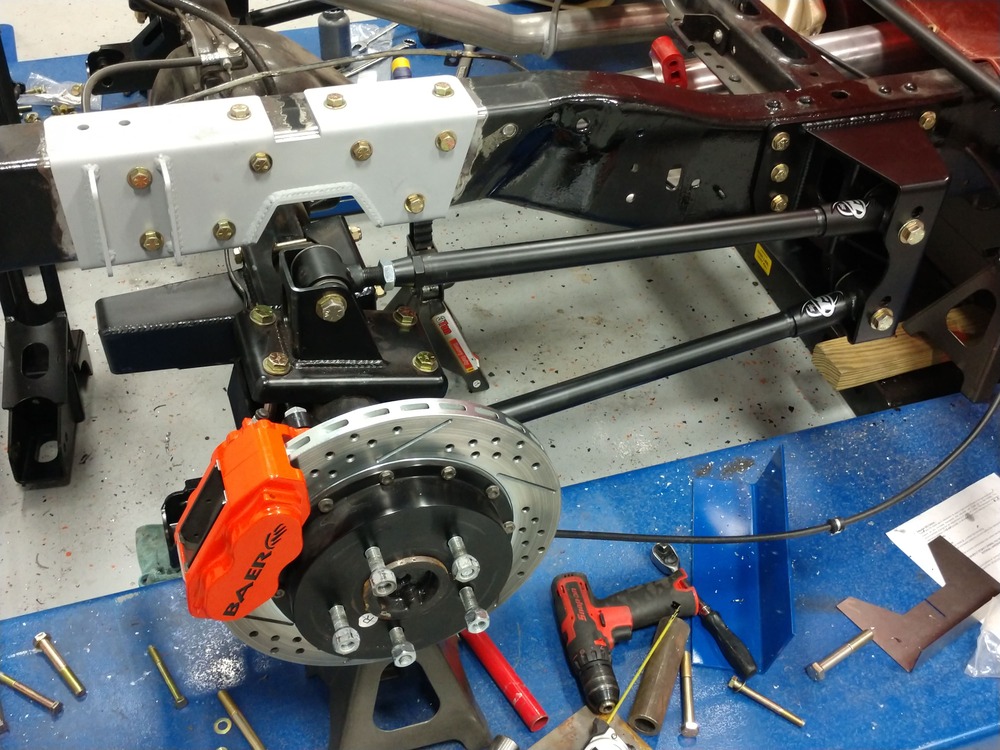 One of the advantages of a four link over a conventional four bar is adjustability. Where a four bar’s mounting points are fixed, the four link has multiple attachment points as can be seen here. 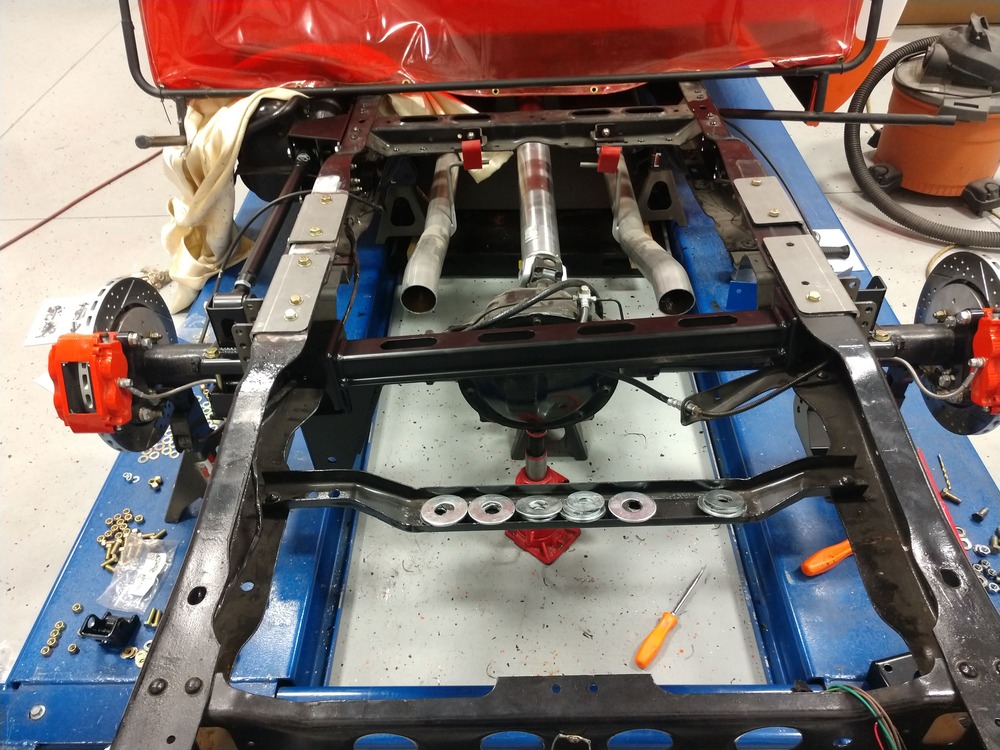 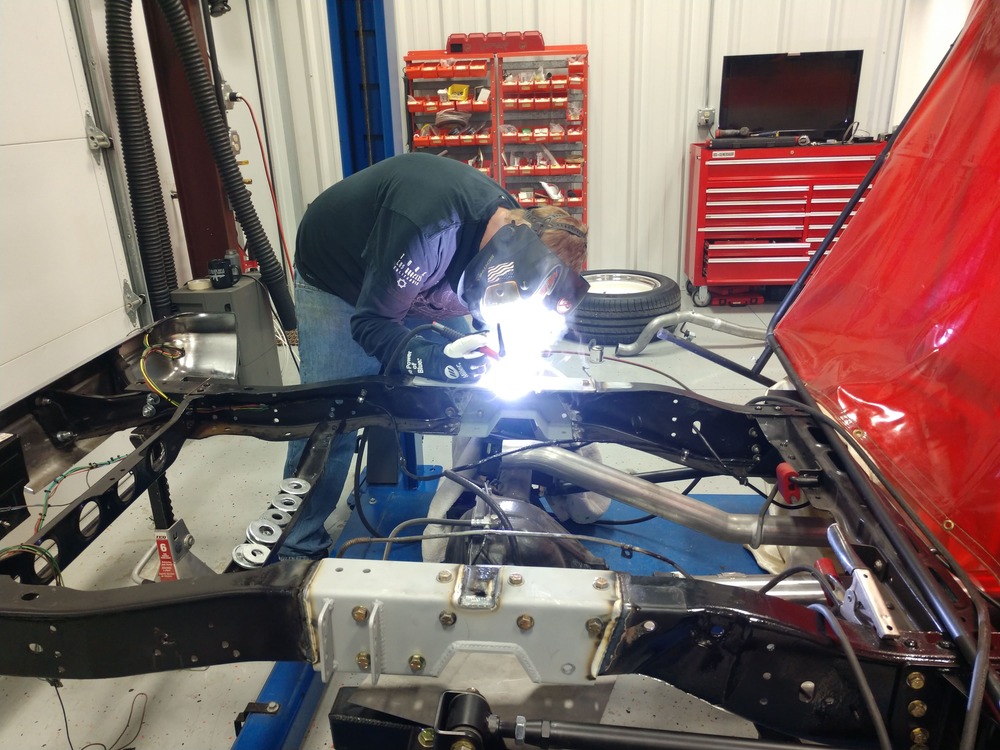 Although it’s not necessary with the bolt-on kits, in this case the notch assemblies were welded to the framerails. 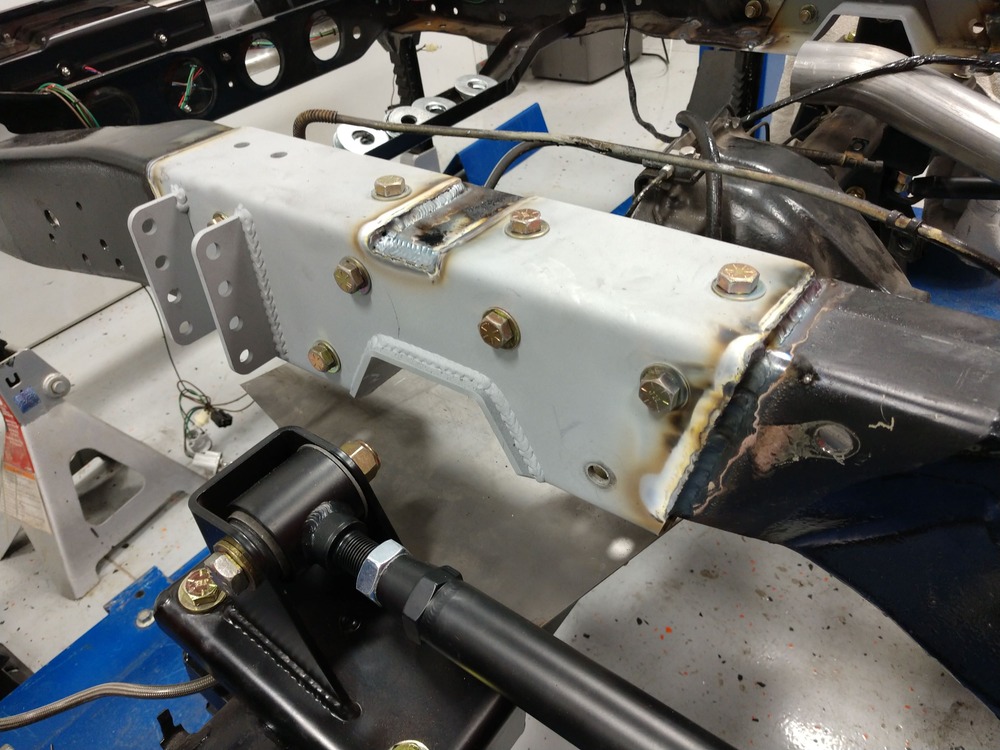 The notch assemblies serve a dual purpose. They allow the proper suspension travel with a lowered ride height and the tabs with multiple holes serve as the adjustable upper coilover mounts. 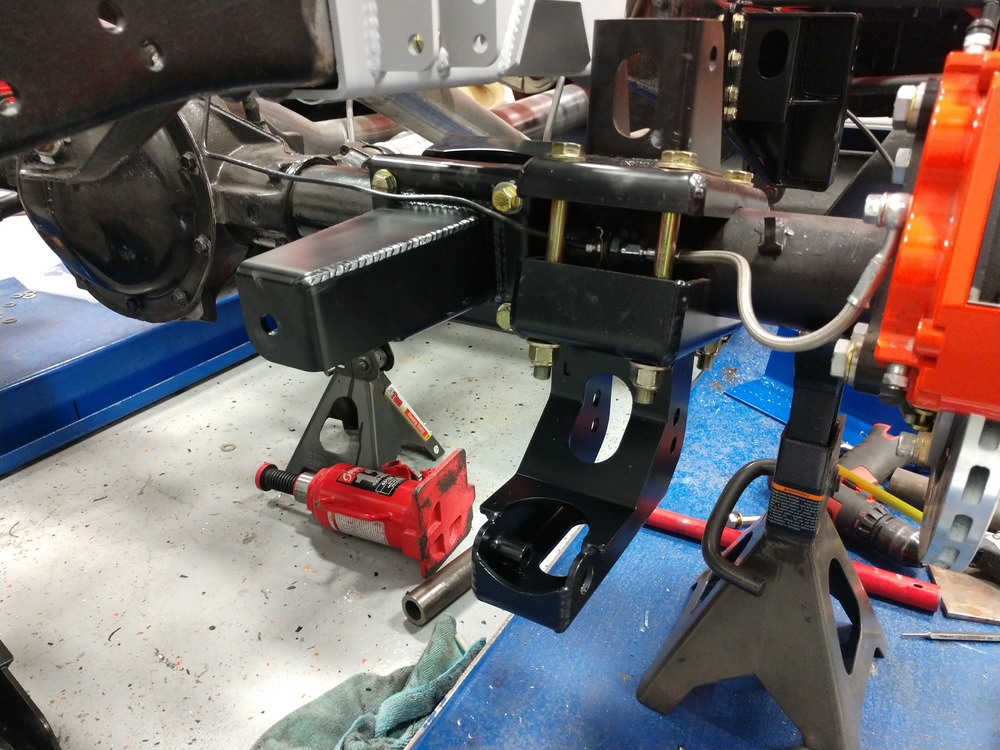 Here, the passenger side lower shock mount (1) and the attachment point for the Panhard bar axle bracket (2) can be seen. 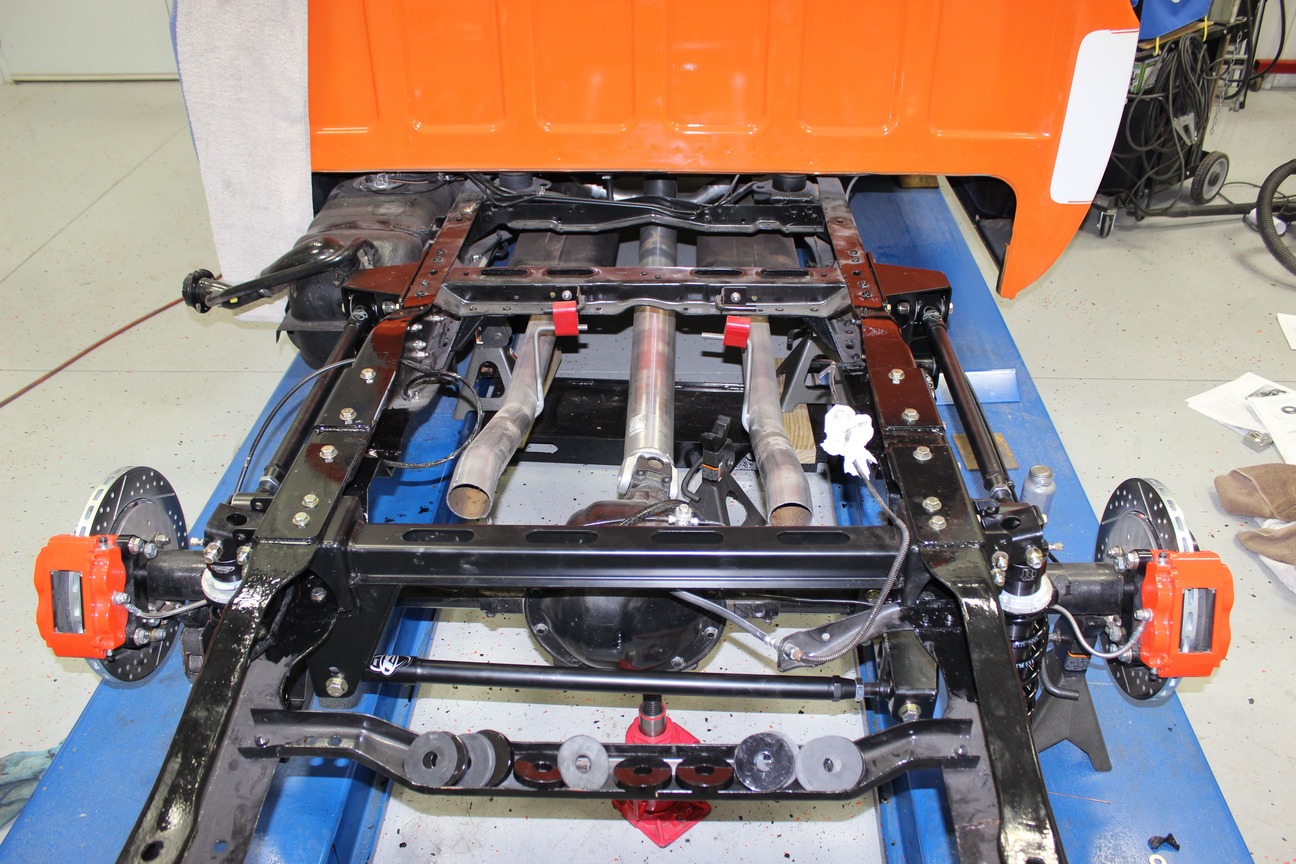 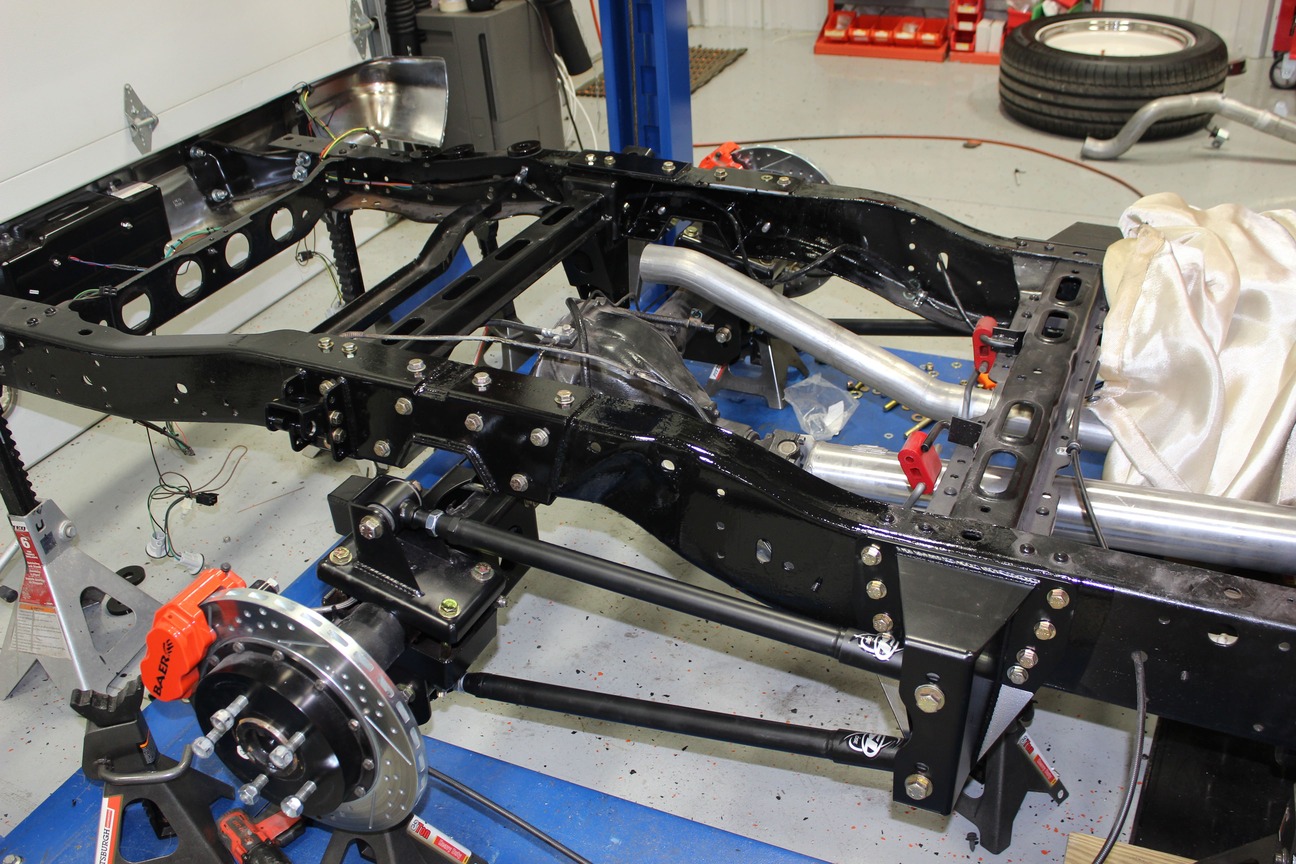 Detroit Speed’s ingenious Swivel-Link trailing arms can rotate within the fixed ends at the chassis bracket. This allows the suspension to work without binding and allows the lengths and pinion angle to be adjusted by simply loosening the lock nut and turning the threaded axle end. 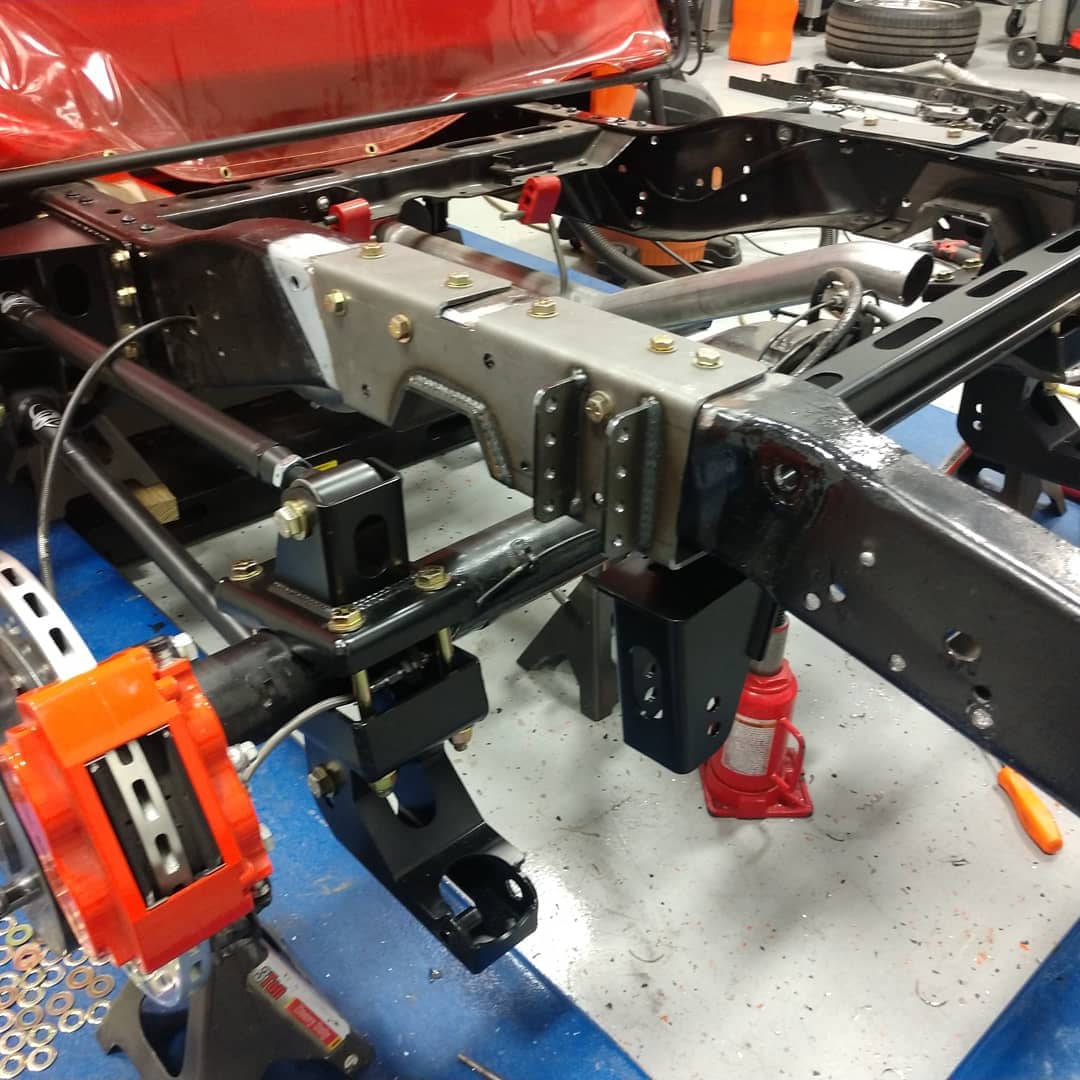 Here, the driver’s side axle brackets and the Panhard bar mount on the new crossmember are visible. 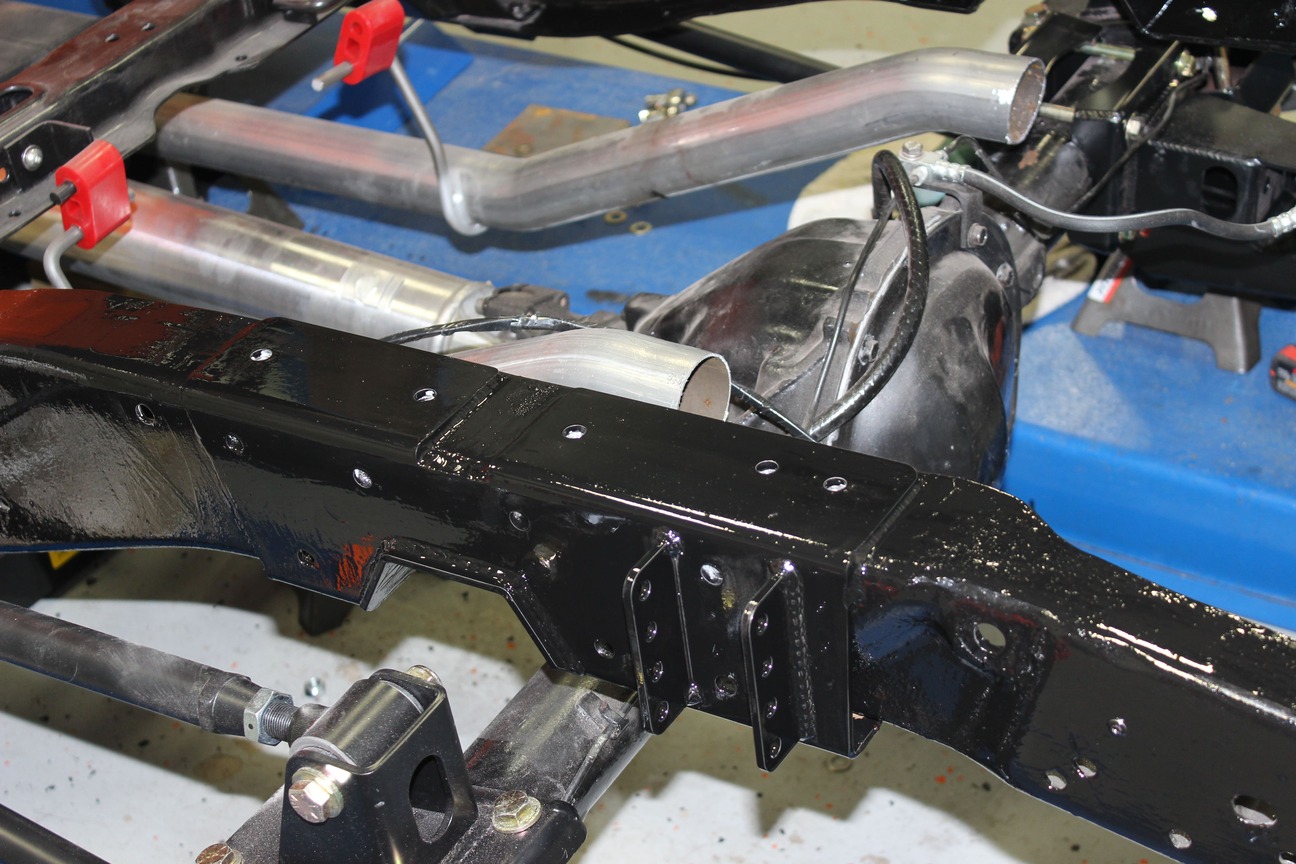 Detroit Speed recommends painting or powder coating the notch brackets prior to installation. 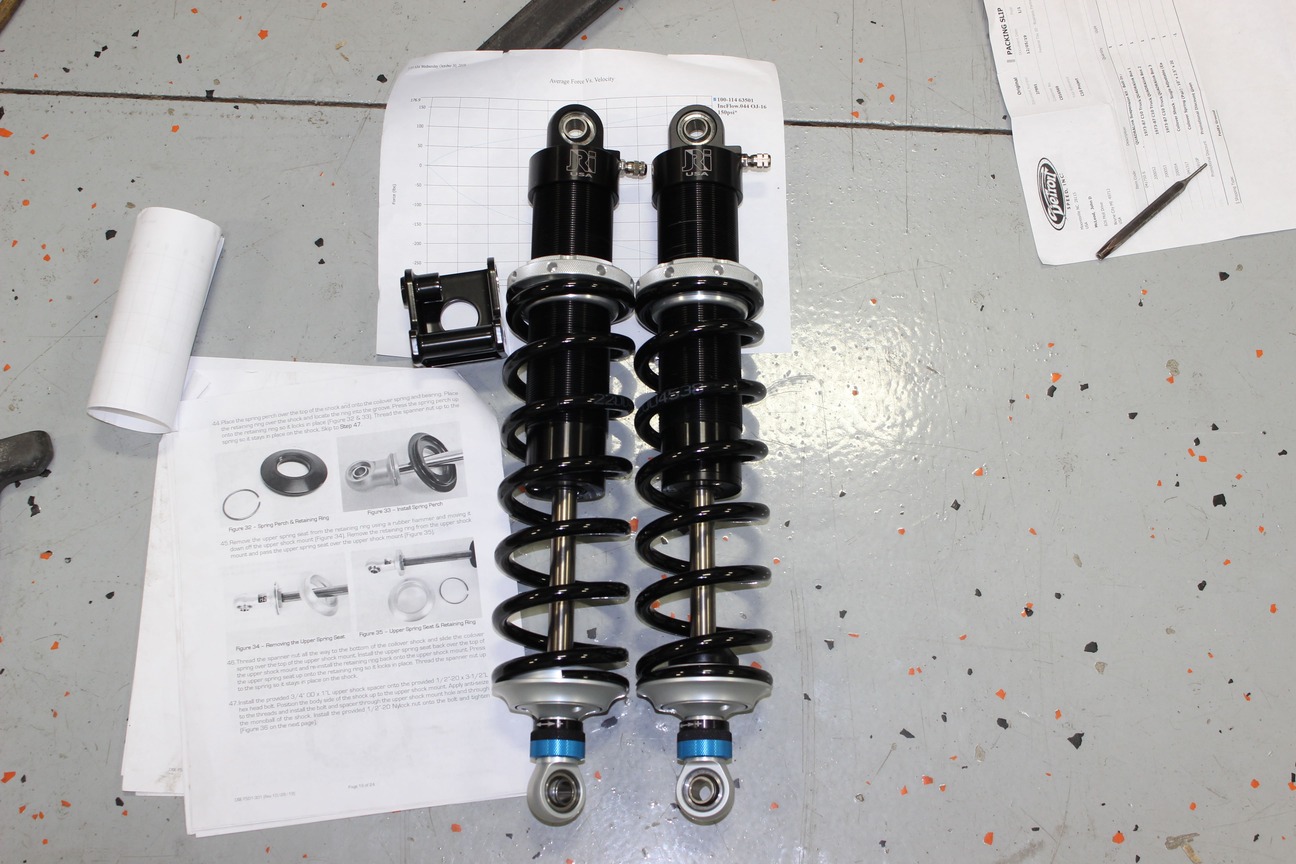 Detroit Speed offers coilover shocks and springs with fixed compression and rebound damping as well as single and double adjustable options. Note they mount with the body 0at the top. 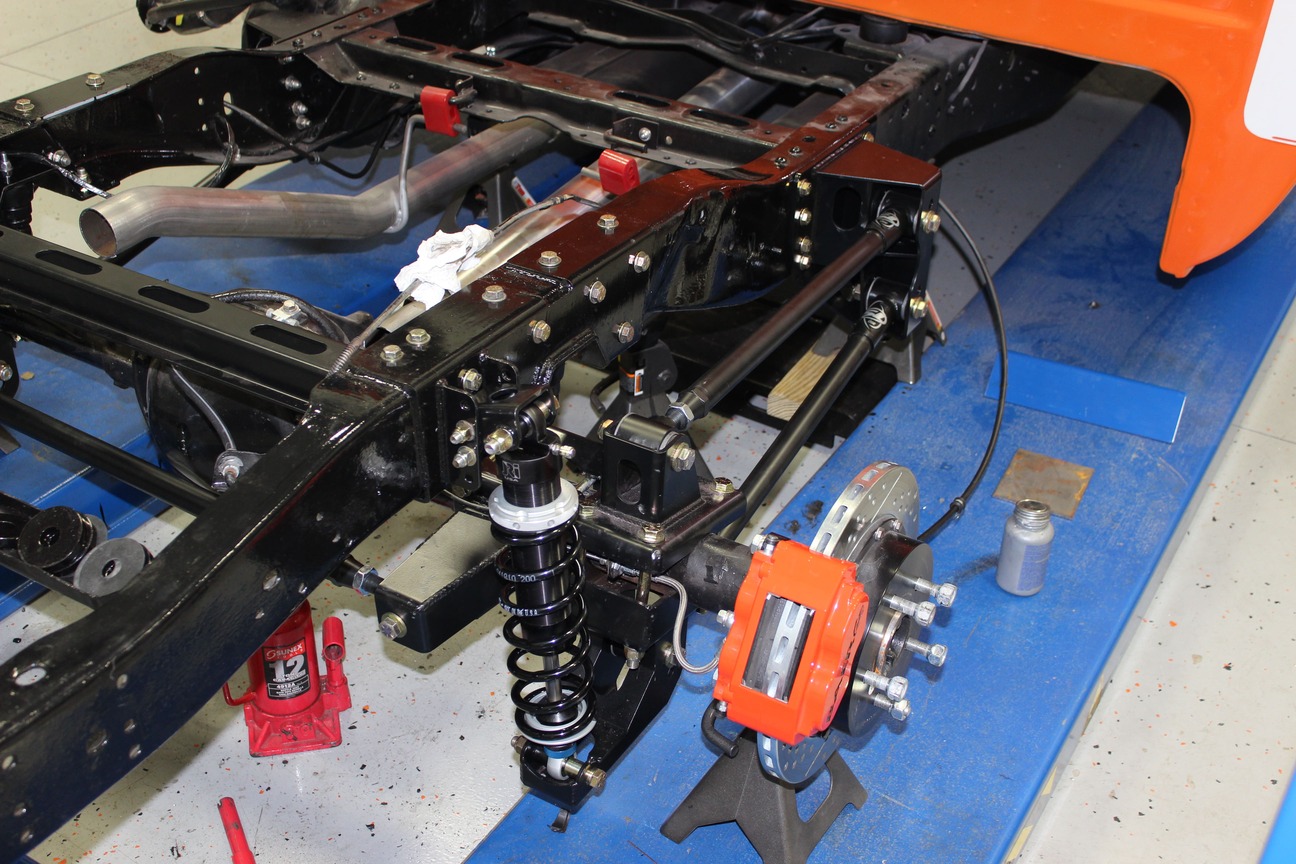 Ride height can be adjusted via the multiple holes in the upper mounting brackets. In addition, the spring preload can be adjusted with the threaded collar on the shock body. 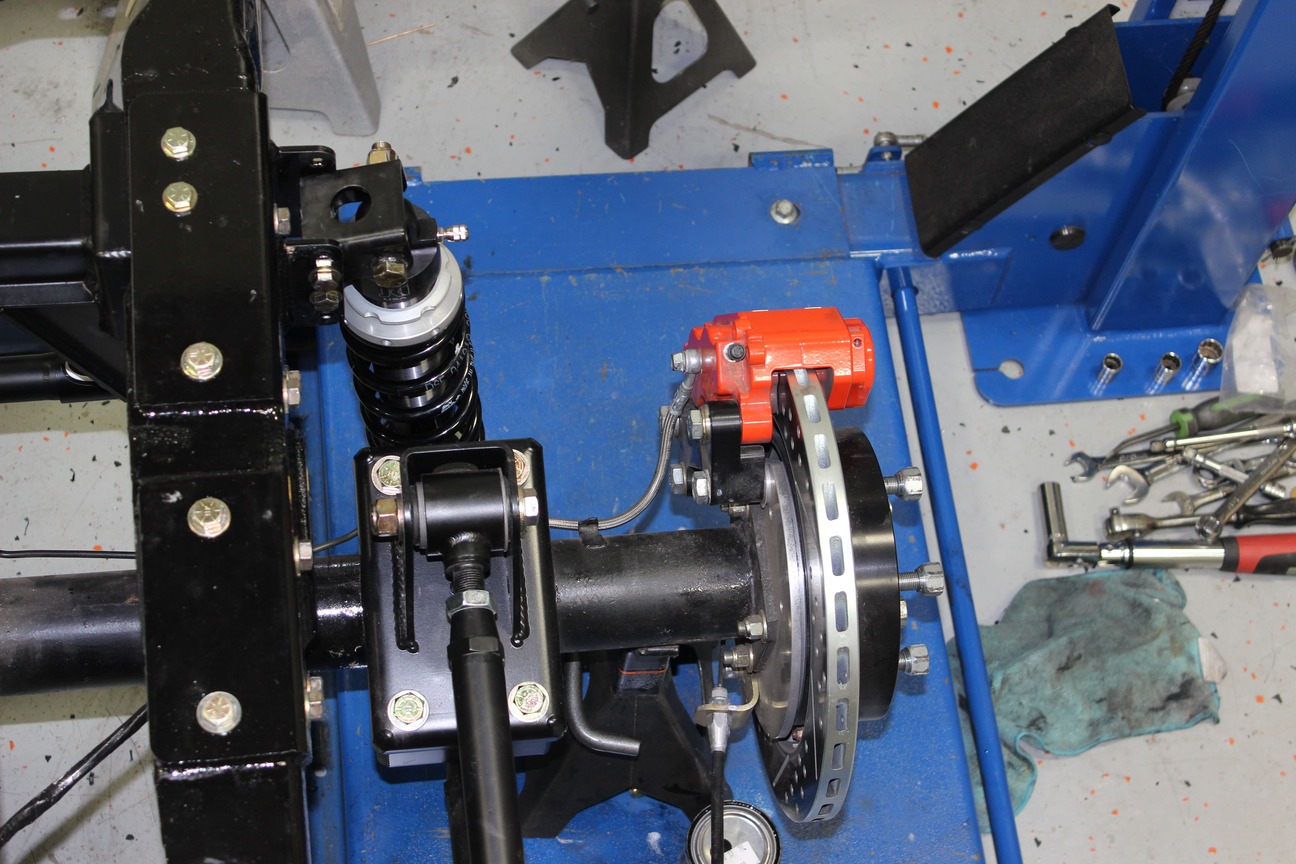 The coilovers location outside the frame rail improves stability while still providing plenty of room for wide wheels and tires. 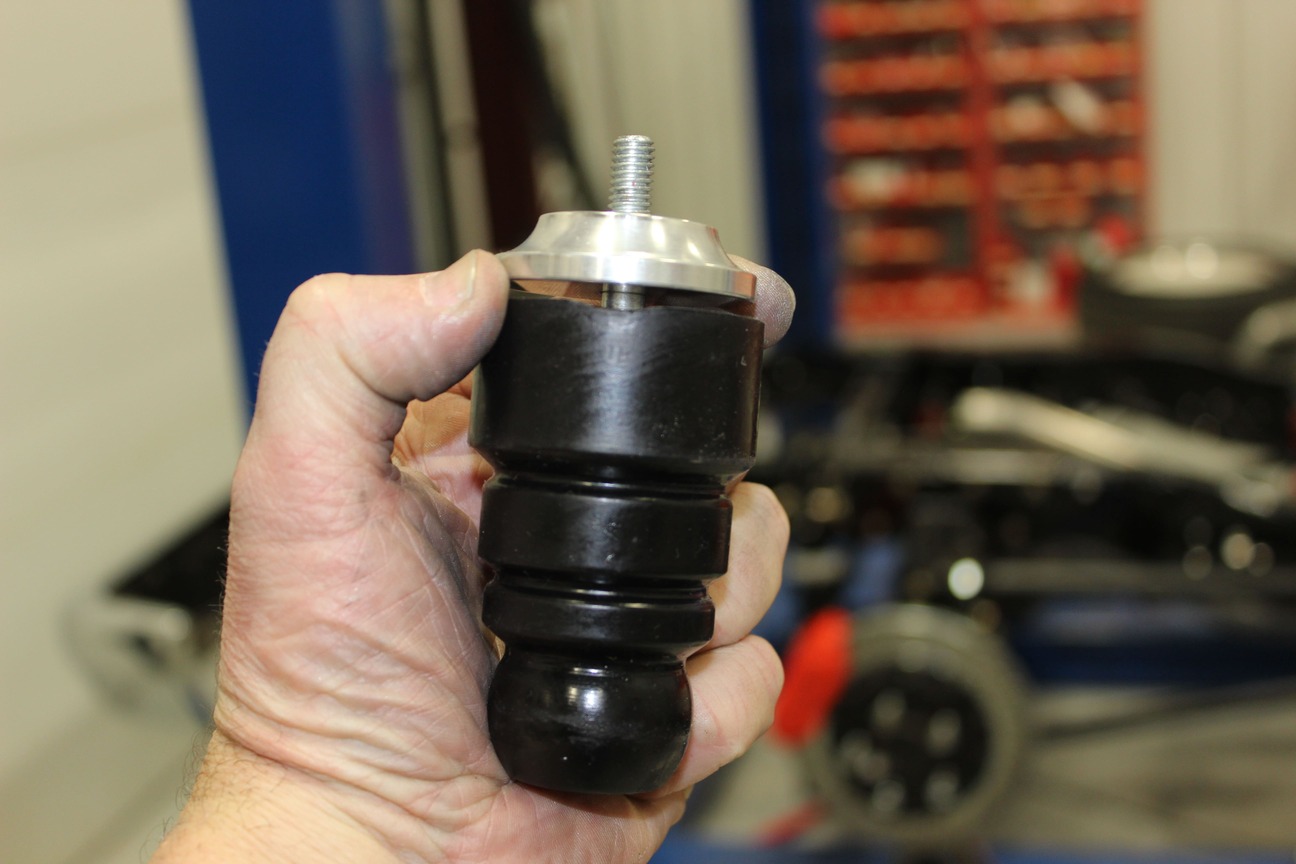