Even when you get something right the first time around, there’s always room for improvement and/or change. For me, I rarely get past completing the first version of most projects—but that wasn’t the case with Floridian Stephen Greene’s family hauler. 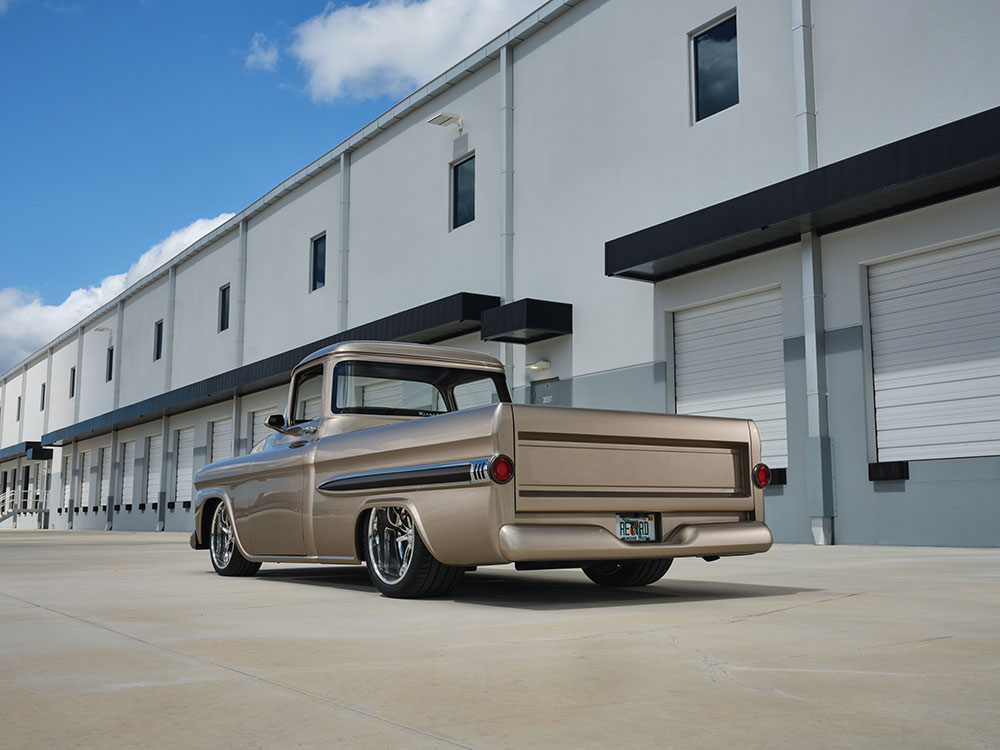 Back in mid 2008, Stephen Greene picked up a 1959 Chevy Apache and immediately took it to Jeremy Miranda, who was just entering his second year as a car builder with his shop Miranda Built in Boynton Beach, Florida. The initial plan was to give the pickup a complete undercarriage update (drivetrain, air suspension), new interior, and a fresh bedwood kit—and that’s exactly what Miranda did, delivering the Apache back to Stephen six months later. For the next 10 years, the 1959 Apache became part of the Greene clan, taking them to local car shows as well as family trips throughout Florida. 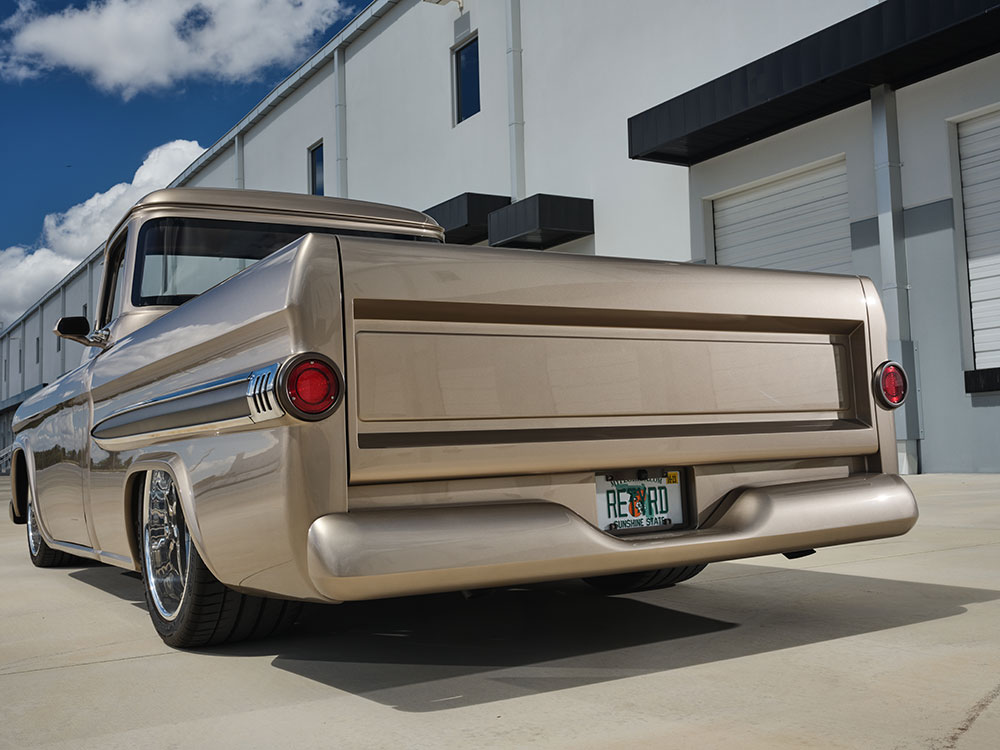 By now, Stephen had decided to take the classic truck to the next level by creating a “custom, luxury truck” that he could fully take advantage of in his retirement years and take to all the big shows across the nation with his family. Of course, he headed straight back to Miranda to get the full Miranda Built treatment. Unfortunately, Miranda was booked solid at the time, and as a result Stephen took it elsewhere for body and paint. And if you’re like me, you could see this next part coming from a mile away: At this other shop, the Apache managed to get completely disassembled—but that’s about as far as it got. Fortunately, however, as soon as Jeremy had the space the following year, he collected the project and wasted no time getting phase two of the truck moving along. 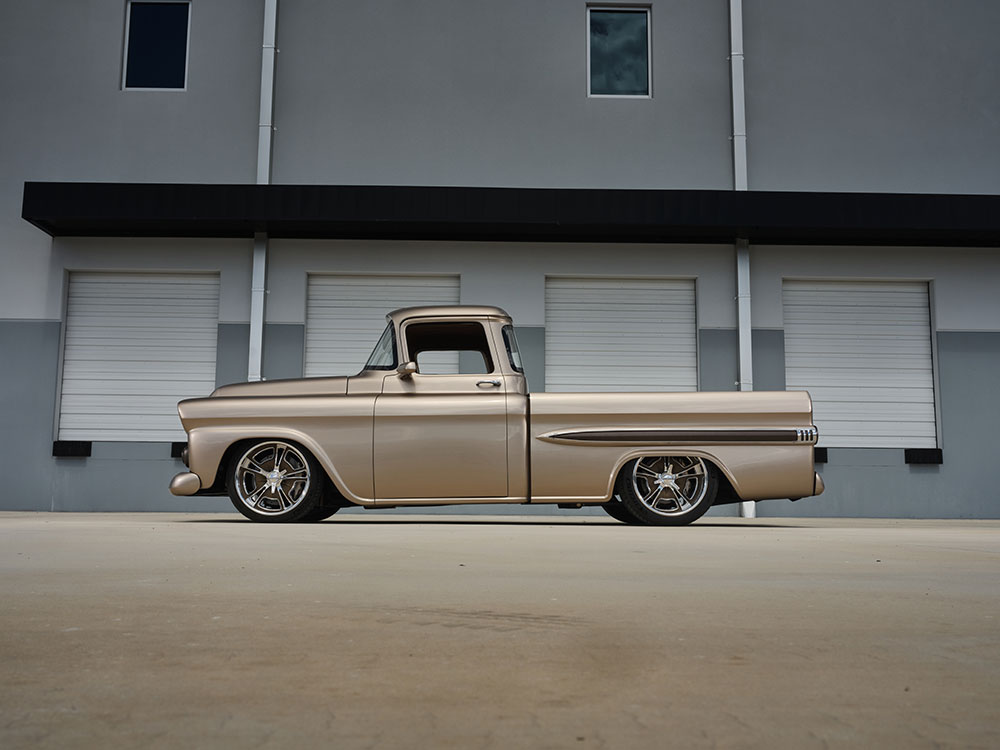 The fact that Stephen’s truck may have been in a million pieces turned out not to be such a bad thing after all. The decision had been made to forgo the original chassis and all its trimmings in favor a SPEC Roadster Shop chassis with all the usual fare: LS3 engine Connect & Cruise, Wilwood discs capped with a gorgeous set of Schott wheels, and Roadster Shop coilover-based suspension. Externally, the engine is nothing like it was when first pulled from the Chevrolet Performance crate (Miranda added Holley LS valve covers to conceal the coils, installed a Concept One serpentine system, and fabricated a 2.5-inch custom stainless exhaust that uses Borla mufflers and the stock cast manifolds). The same can be said for the 1959 Apache’s engine bay as well: it now has absolutely no resemblance to its former guise. From the firewall clear up to the swoopy core support, there are more hours in under hood sheet metal work than I can imagine—it’s literally a work of art. And now, the only components “not” attached to the engine that remain visible: the Eddie Motorsports billet hood hinges. 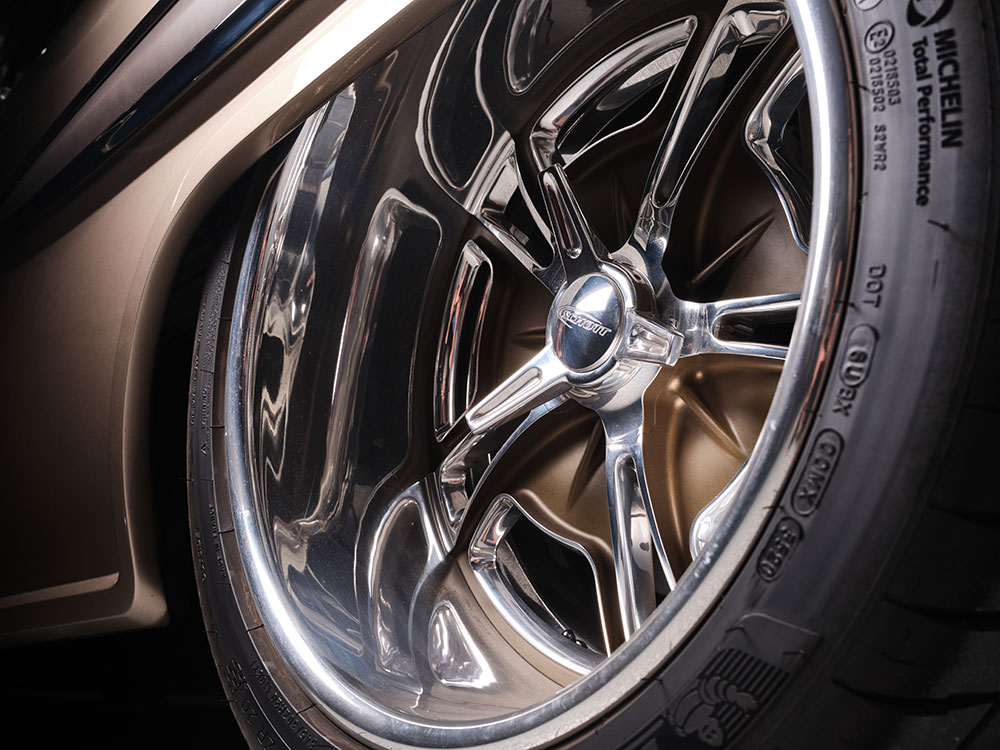 Obviously, Miranda Built took those metalworking skills on out through the exterior as well. Pretty much every square inch of external real estate was massaged, reworked, or eliminated altogether. Smoothed bumpers have been tucked in tighter, all trim (besides the bullet spears) shaved clean, doors were reshaped and fitted with custom latches, and the bed now features smooth inner side panels with handmade wheel tubs and a smoothed tailgate with the latch relocated to the inside. When all was said and done, the ‘59 Apache was shipped to Relic Restomods in Richmond, Illinois, for final bodywork and its new PPG Porsche Champagne Metallic offset with darker satin accents.

Before moving onto the last stage before completion, Miranda Built installed flush-fit glass front and rear for a modern look, which works very well with the overall smooth theme of the truck. To finish off the bed properly, rather than doing a traditional wood floor, Chris “Bones” Tolson was commissioned to help configure a custom extruded-aluminum floor that looks just like wood! 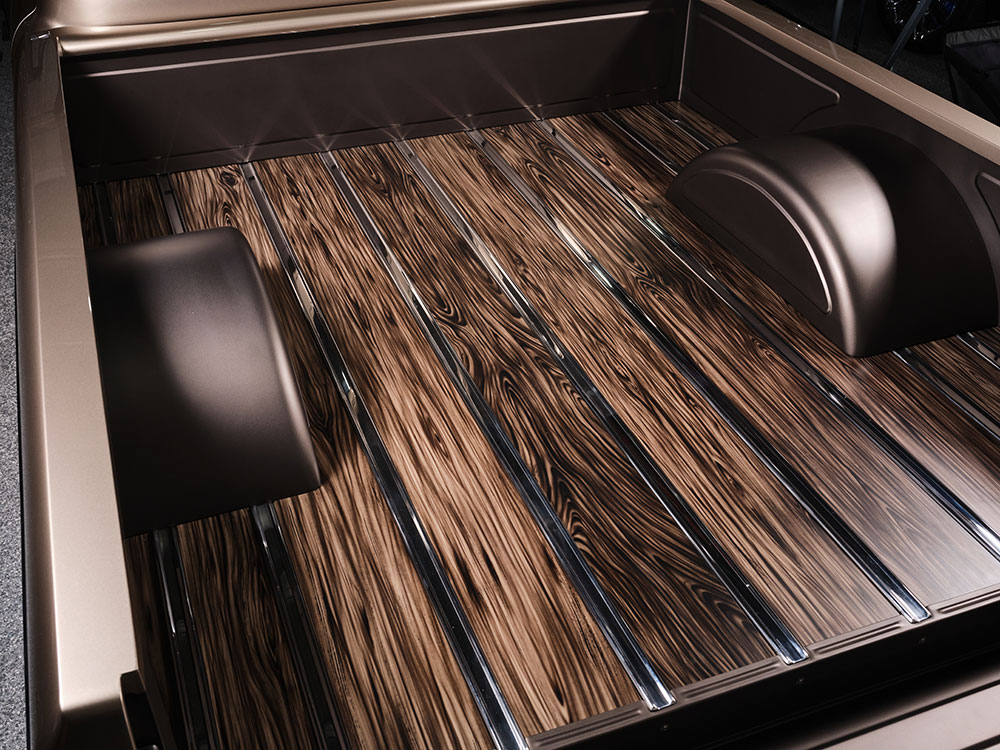 Rounding third and heading toward home with no looking back, in order to fully complement the sheet metal work previously done inside the cab, Miranda called on nearby Innerworx Modern Interior Solutions in Sarasota, Florida, for a full custom interior trim job. To allow maximum occupancy, the stock bench seat frame was retained (and modified accordingly), but other than that, no other OE interior items were harmed by being reused. For the seat and door panel inserts, cocoa-colored Relicate Leather was used; for the sculpted, two-dimensional carpet, cocoa-colored square-weave laid; and for the underside of the roof, Innerworx installed a custom Alcantara suede headliner. The creature comforts Miranda Built had already put in place include Dakota Digital’s VHX retrofit cluster, Vintage Air Streamline climate control, Alpine/JL Audio sound system, tilt ididit steering column with a Truss Sparc Industries steering wheel, and to top it all off, an Infinitybox modular wiring harness system was used to power and control the Apache like a brand-new truck! 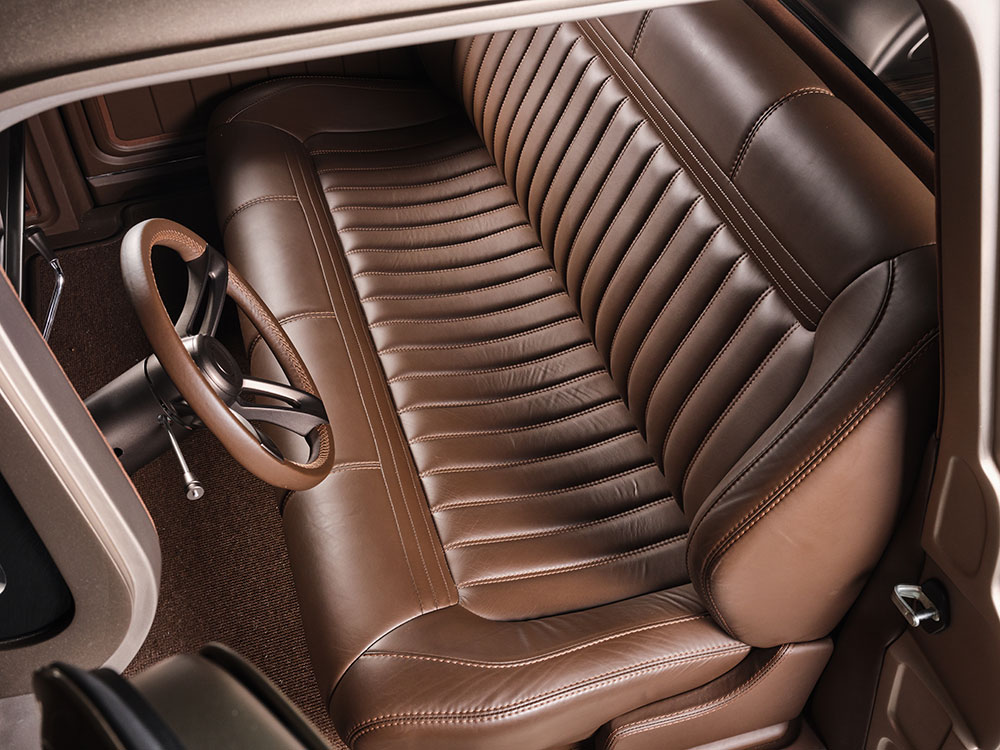 On December 1, 2021, after making a huge debut at SEMA (where earned a Top 3 finalist in Truck/Off-Road Battle of the Builders), Miranda Built delivered the ‘59 Apache back to its eagerly awaiting family to begin its next life as the Greene family hauler!