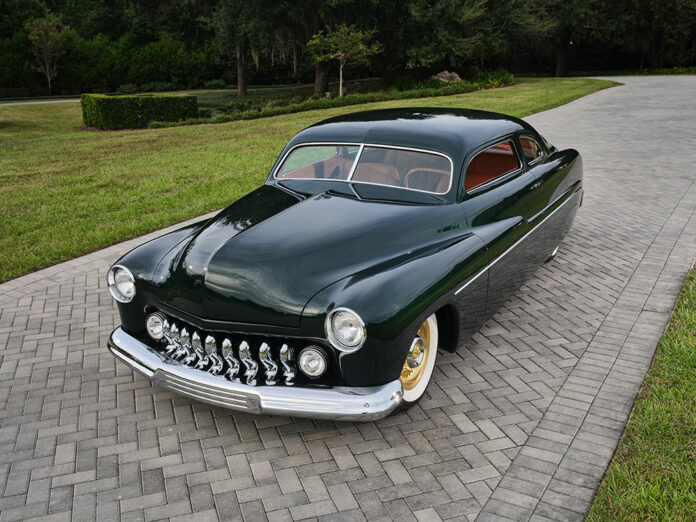 If you’re going to build a postwar Mercury custom, your effort will inevitably be compared to Masato “Bob” Hirohata’s ’51 Merc built at Barris Kustom Industries in 1952. While the Hirohata Merc will always maintain its lofty station (especially after the custom 1951 Mercury sold at auction for $1.95 million), the latest effort from Frank Tetro of Harbor Auto Restorations (HAR) has clearly set the modern standard with the ’51 Merc custom belonging to Warren Wubker of Florida. The chopped top Mercury lead sled hits all the right traditional notes, with modern chassis and custom body shaped by today’s masters. 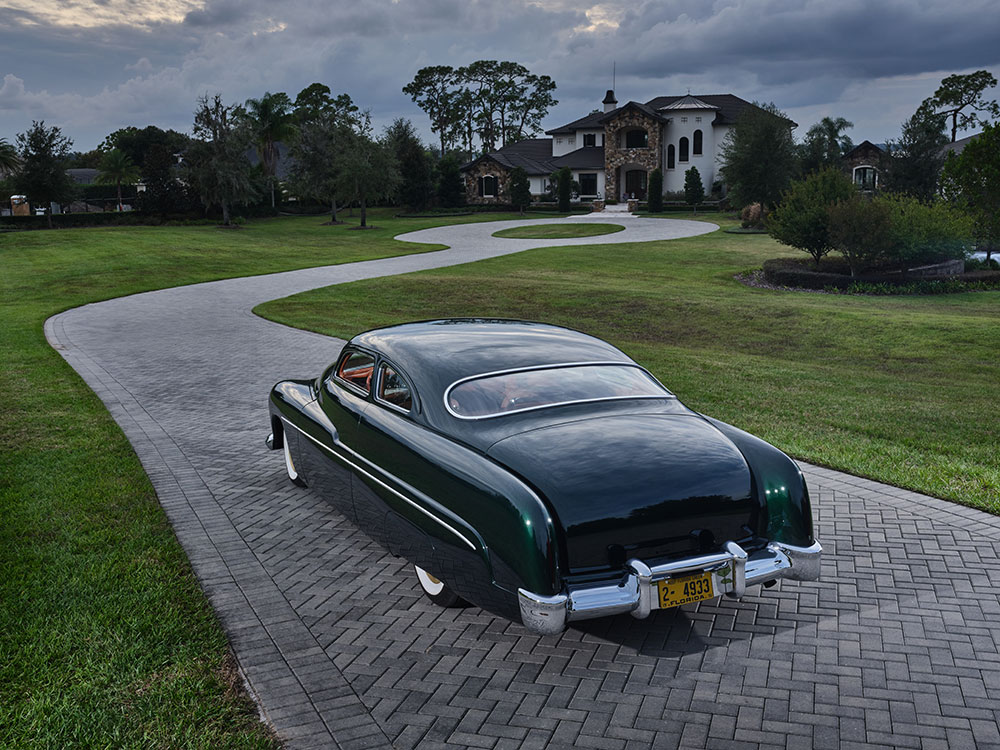 In one of the first outings for the ’51 Merc, Warren and Tetro took home the Triple Crown of Rodding’s Best Street Cruiser at the Hot Rod Roundup hosted by the Shades of the Past Car Club at Dollywood’s Splash Country. While at the show, it was also clear it was one of the more-popular rides present, with a constant throng of admirers looking under hood, examining the interior, and frequently speaking with the crew from HAR. 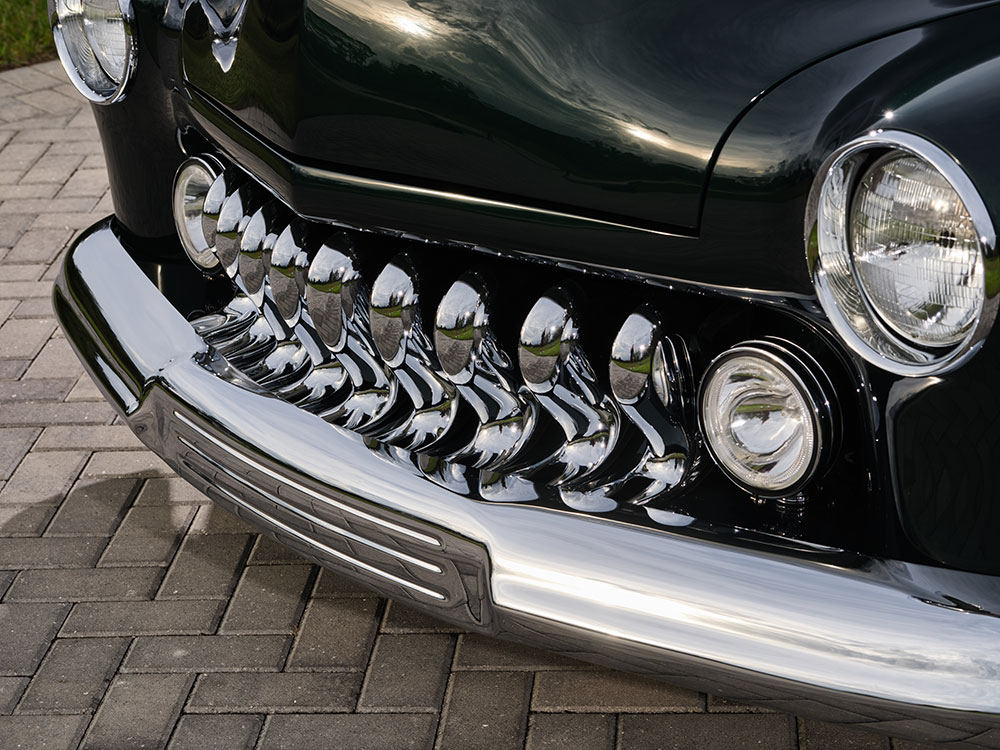 Should you build a ’49-51 Mercury custom, you can rest assured that the obligatory top chop will be part of the final form. Before beginning the build process at HAR, the lead sled visited Bobby Alloway at Alloway’s Hot Rod Shop for the 4-inch chop, and a freshly constructed floor. It rolled out after the body was fitted to the Art Morrison chassis from AME. Other body alterations include Frenched headlights with ’56 Lincoln trim rings and the requisite DeSoto grille, the bumpers that were cut, sectioned, and flipped, custom side moldings, shaved door handles, smoothed tail lights, one-piece front sheet metal clip, ’50 Mercury rear glass, custom window moldings, along with the stock hood. The following bodywork, of which there’s a great deal, was handled at HAR with the painting sprayed on by Marc Neron of Menace Customs in an RM Unripened Green Metallic with ghost flames by the master Josh Shaw. Shaw laid out the flames and sprayed the color after Neron did the mixing and prepwork. Neron then laid down the clear and Shaw pinstriped the flames. 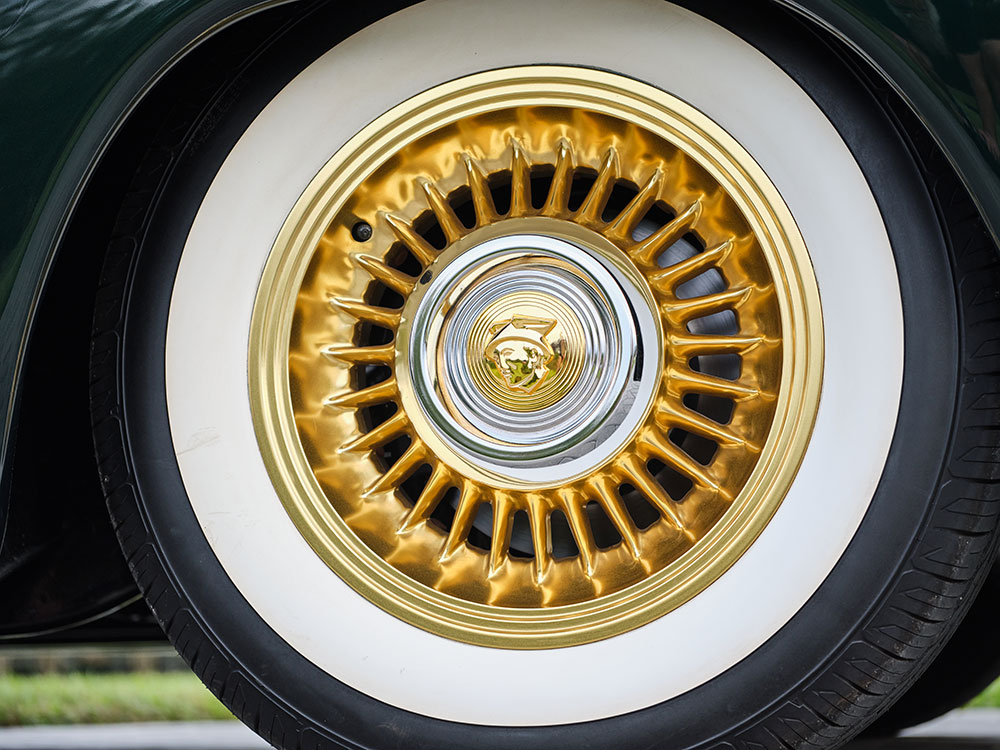 I’ve mentioned the chassis earlier but let’s take a “deeper” look. The AME chassis came with an Independent Front Suspension and a Ford 9 inch rear end with Moser axles and 3.42 gears. From here you will find Strange Engineering coilovers in front and airbags in back, a Flaming River rack-and-pinion, AME front and rear sway bars plus a rear Panhard bar and Wilwood disc brakes in front and drums in back, all operated by power brakes. The wheels are ’56 Caddy Sabre wheels measuring 15×7 with 4-inch backspace at each of the corners. The rubber comes by way of Toyo with custom whitewalls measuring 225/50R15. 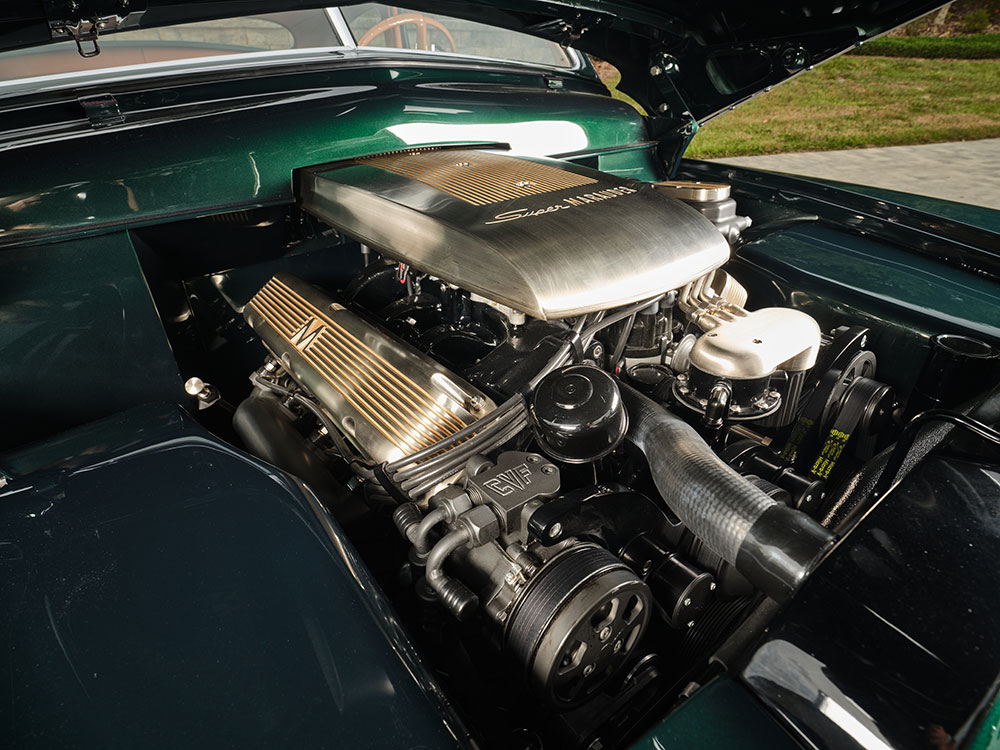 For a long time the powerplant that rested beneath the hood of a lead sled custom car was often “forgotten” territory. I can remember on those rare occasions getting a glance under the hood of a true custom only to be disappointed. The engine of my pickup looked better. Not anymore. The ’51 Mercury custom on these pages has a beautifully crafted engine compartment and V8 paying homage to early Mercurys and vintage engines.

One of the rarest vintage engines is the ’58 Mercury Super Marauder, of which it’s reported only a 100 were made. This was the most powerful V8 of the era, producing 400 hp (the first Detroit engine to publish this number) via a Holley Tri-power out of 430 ci. MEL series engine (In 1959 the Mig M, as it was called, was detuned.) 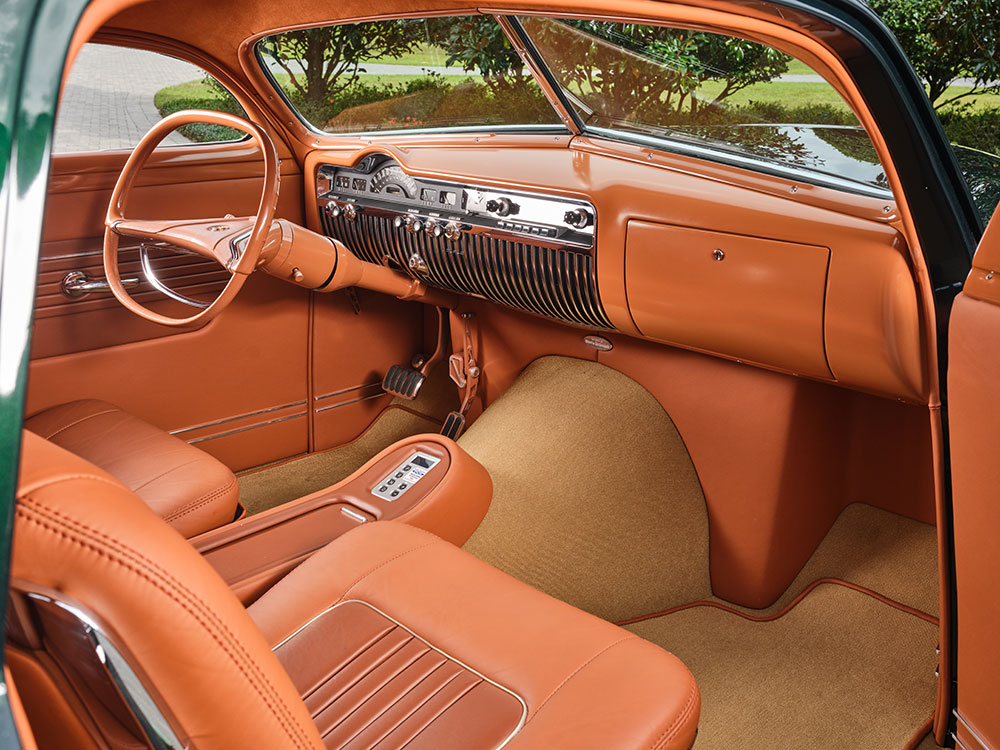 Residing under the hood is one of the vintage Big M motors, now featuring a Comp Cams camshaft, a Mercury distributor that’s now electronic and is matched to an MSD coil, and a set of Taylor spark plug wires. Included are a Holley fuel pump, factory exhaust manifolds with 2-1/2-inch stainless exhaust tubing, along with a pair of MagnaFlow mufflers and a CVF Racing serpentine belt system. Powermaster received the nod for both the starter and alternator. The vintage MEL V8 is backed up to a Merc-O-Matic three-speed modified by Arnold’s Transmission using a PCS Electronic shifter. A modern interpretation of the Mercury Turnpike Cruiser drivetrain used in 1957 and 1958 which featured the Merc-O-Matic behind the 368, 383, and the 430 motors. (It should be noted that the name “Turnpike Cruiser” was christened to commemorate the creation of the Interstate Highway System.) 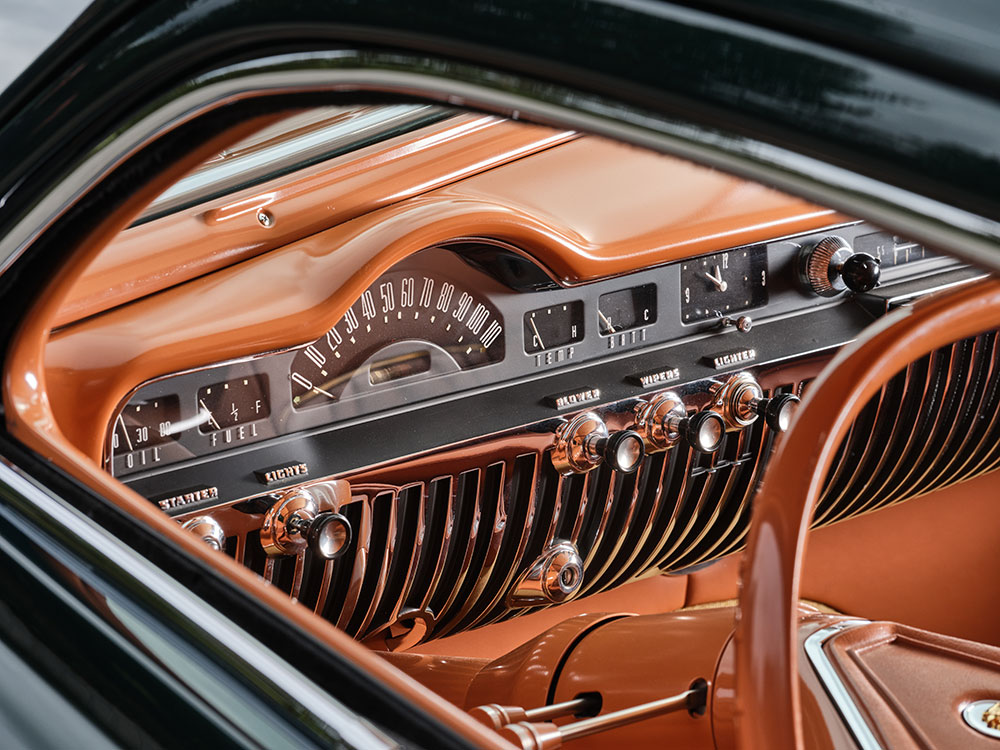 Inside the 1951 Merc custom does have all the prerequisite creature comforts, such as air conditioning, tilt column, and electronic shifter. The Vintage Air unit has its airbox mounted in the trunk and from there feed ’57 Lincoln Continental Mark II roof vents. The controls are hidden within the center console beneath a sliding door. Other console-mounted controls belong to the PCS electronic shifter. The electrics are handled by an American Autowire wiring harness position by Rodney Hadwiger with the juice coming from a battery that’s also trunk mounted. The ididit steering column with a Chrysler Imperial steering wheel all residing beneath the factory dash and gauges that were restored by D&M Restorations. The seating is a combination of a pair of ’64 T-bird buckets in front and a custom-made bench in back. The stitchwork is from the sewing machine of Steve Holcomb of Pro Auto Custom Interiors in a brown leather with Daytona Weave for the carpeting and a suede headliner.

Read More: To the North Pole In A 1939 Mercury Custom Sedan 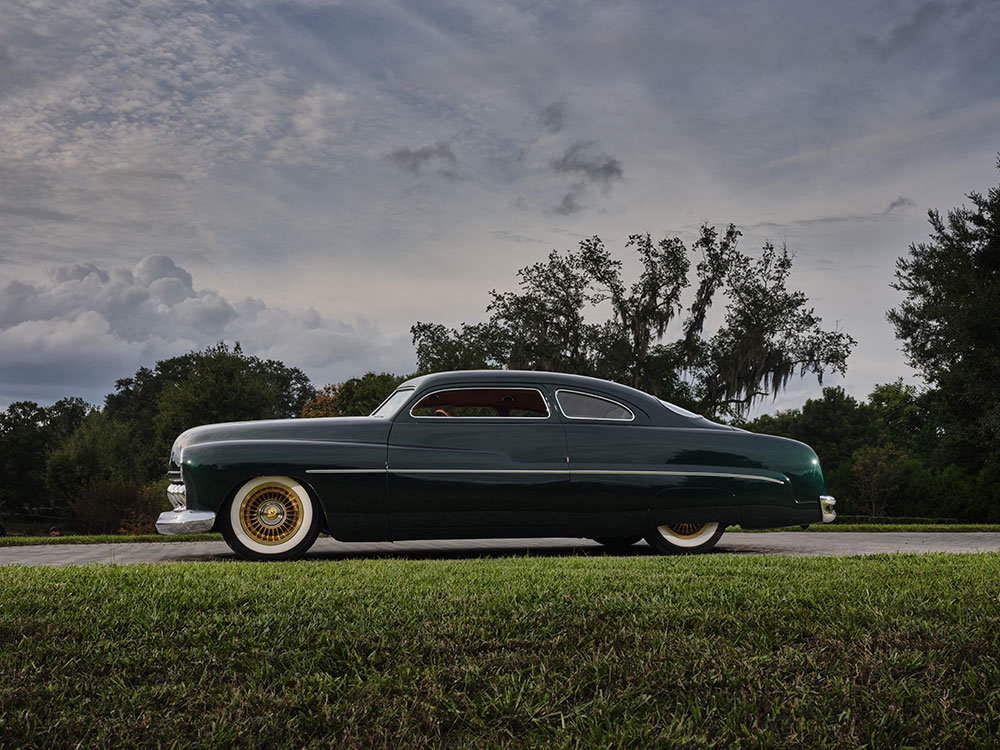 Well, there you have it. The custom is alive and well and this 1951 lead sled Mercury is the perfect standard bearer of what we should expect to see in the future. Expect more exciting Mercs because of this Best Street Cruiser award-winning lead sled. MR