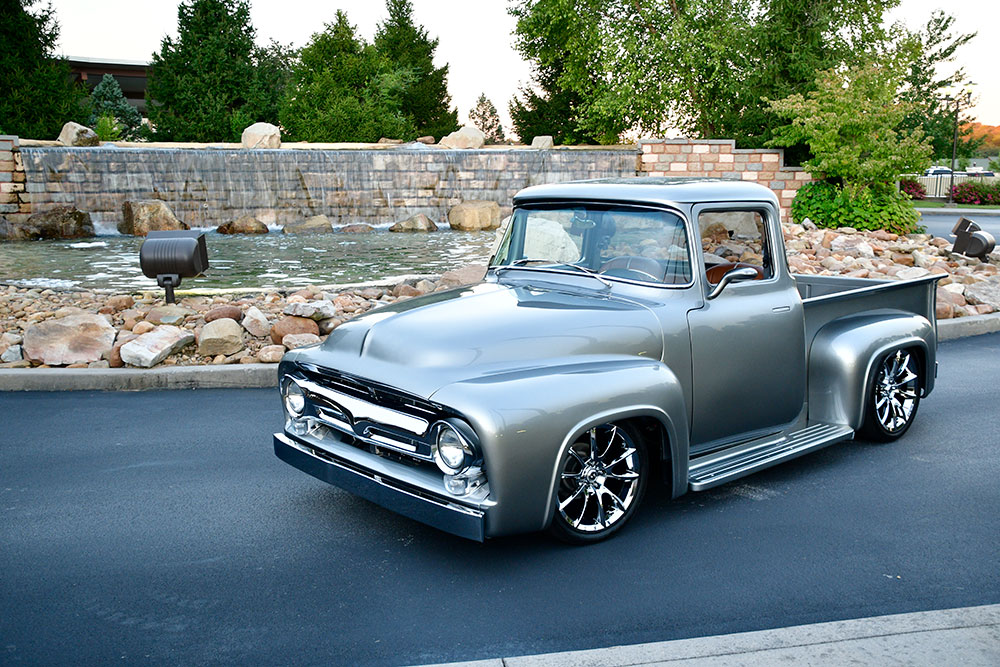 Joe Massaro’s no-compromises 1956 Ford F-100 came out perfect. However, because he is Canadian, Joe has still yet to drive it or even see it in person, because of the border crossing restrictions. Still, the finished truck won an award at the F-100 Supernationals that will eventually make its way back to Canada. 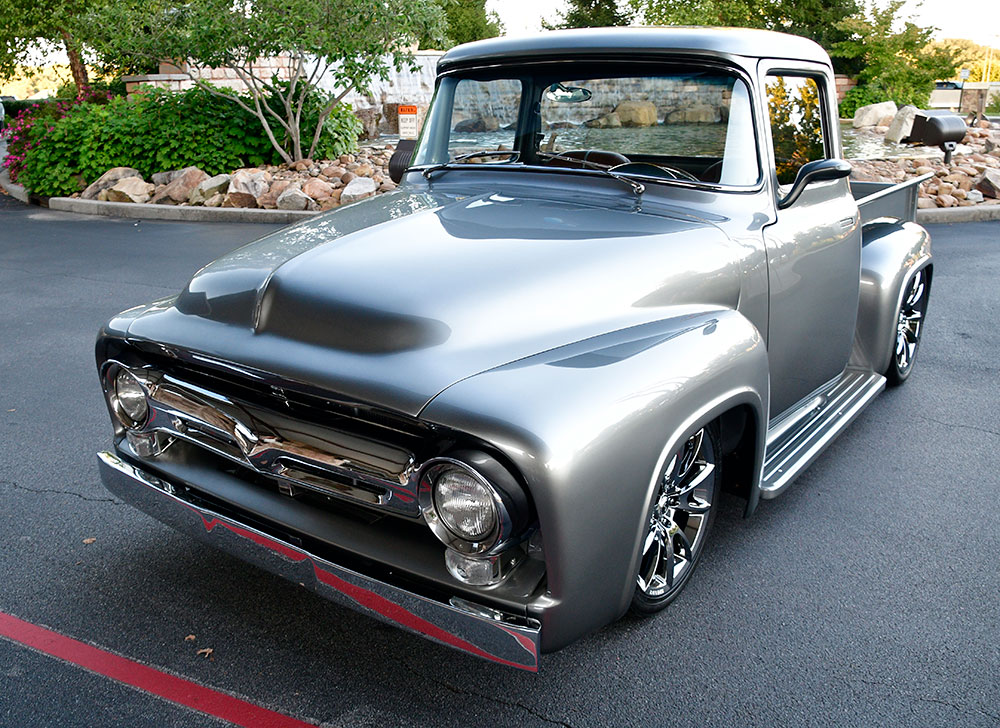 The idea of doing whatever it takes to get the job done correctly should always be the goal, but often the cost in time, money, and material has a project truck driving down a different road. Perfection doesn’t come cheap and it’s certainly not quick, but, in hindsight, the results always seem to be worth the extra effort. It was with that “no-compromise” philosophy that Canadian Joe Massaro began the creation of his ultimate 1956 Ford F-100.

Joe had researched several vintage Ford trucks on eBay without success but the time wasn’t wasted. He did make a connection with Nick Wehrmann, the owner of a small hot rod shop in North Wilkesboro, NC. It didn’t take long for Joe to realize that Wehrmann shared his same no-compromise philosophy, important because, as Joe recalls, “I wanted things to be the way I wanted them. It’s part of my art director/designer background that influences my decisions.” 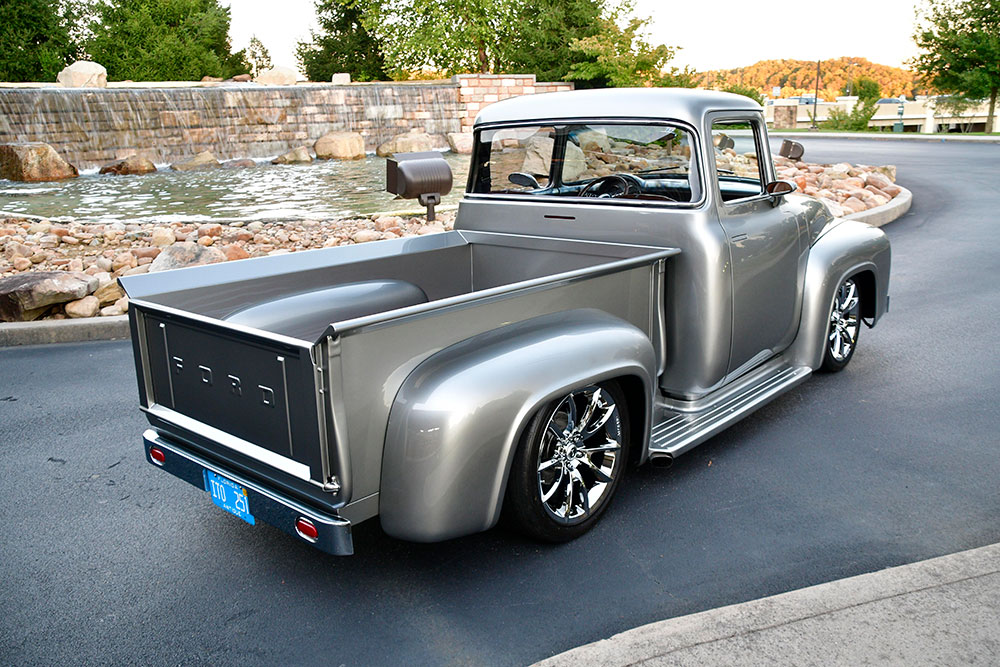 The approach to the customizing process was simple. When dealing with an icon, custom touches should reinvigorate the identity rather than tampering with an already-successful design. Joe’s goal was to apply those principles to a mid-’50s Ford truck and the 1956 F-100 was the coolest of that era. He found one on Craigslist in South Carolina and smiles when he says he overpaid a bit since that year has become so popular. Like the start of most projects, the opening plan was to build just a nice driver but as the build progressed, they began introducing progressively higher levels of subtlety to set the truck apart from the rest. Unfortunately, before the effort could be completed, Wehrmann decided to close his shop and retire. Fortunately, he stayed involved and agreed to oversee the continuation of the build.

That’s when the vintage truck was moved to Roman Road Restoration, a North Wilkesboro shop that had an impeccable reputation. Wehrmann met with owner Larry Cleary and convinced him to take over the project. Joe says, “In hindsight, we probably should have gone to Roman Road a lot sooner.” Cleary and the team at Roman Road Restorations came up with a clear vision of the finished product and had the time, tools, and talent to make the dream a reality. Joe quickly found out that Cleary also shared his same no-compromise attitude, especially when Cleary pointed out that some of the previous work wasn’t up to his standards and needed to be redone. Shortcuts were corrected but it added time and money. 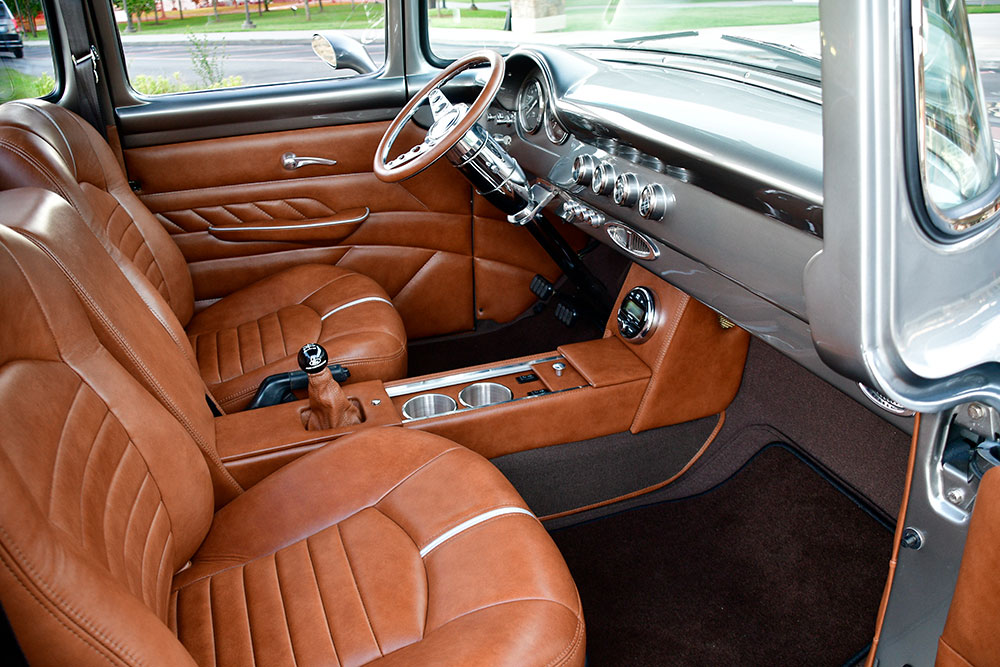 Since the goal from the outset was to recognize the vintage Ford truck’s history while making it function in modern times, the original frame was boxed, reinforced, and upgraded with 2004 Ford Mustang Cobra components from a donor car. A Heidts Mustang II front suspension and the Mustang GT fully independent rear suspension were snubbed by a set of QA1 coilovers along with front and rear disc brakes. The space between the rear frame rails became the perfect location for an aluminum custom fuel cell and the chassis rolls on a combination of Shelby Super Snake 19- and 20-inch rims.

A second 2014 Ford Mustang donor vehicle became the perfect source to breathe new life into the vintage chassis, thanks to its 5.0 Coyote engine and 6-speed manual transmission. For Joe, managing the three pedal shuffle is an important part of the interactive driving experience. Already quick enough, the engine just needed a few extra tweaks, like the Spectre cold-air kit, BBK long-tube headers, X-pipe, and a 3-inch Borla exhaust that finds a neat exit at the ends of the running boards. An oversize radiator and electric fan keep everything cool. Showcasing the already-distinctive Coyote V8 are custom inner fender panels, smooth firewall, and tilt forward hood. It looks good, sounds great, and goes even better! 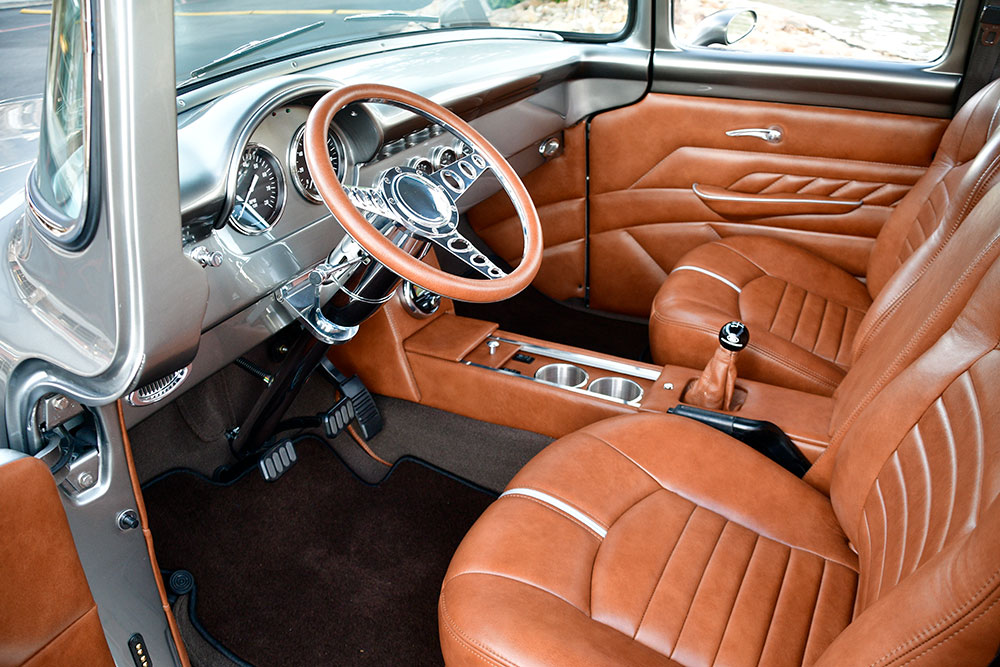 Body mods began by just lightening the profile. After pancaking the hood 2 1/2 inches, the front bumpers were tucked in close to the body, then the front accented with the iconic 1956 Ford F-100 grille and parking lights, now done in bright chrome. Kindig It Design door handles replaced the original, Vision Hot Rod side mirrors feature turn signals built in, and the door glass is now a single pane. Subtle enhancements included the installation of a big back window and cutting a center brake light into the cab.

Once the engine compartment, front end, and cab were complete, it was time to personalize the bed. Dan Carpenter’s Specialties provided the classic, brown-stained Oak planks, raised 3 1/2 inches over stock and fitted with one-of-a-kind lengthened inner fender panels that match the wide rear fenders. Custom latches hold the tailgate in place while frenched tail lights glow in the tucked chrome bumper. 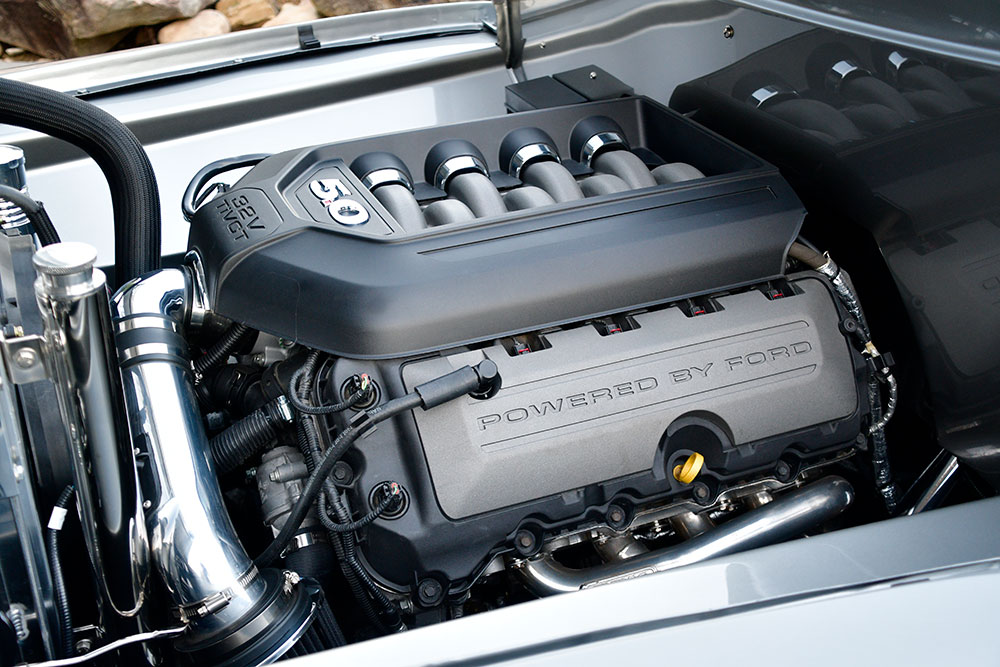 Moving inside, the interior is a work of art. Natural leather covers the 2000 Chrysler Concorde power seats and door panels. Design elements include the unique center console that holds the stick shift, cup holders, power window controls, and Memphis car audio stereo. The highly modified dash holds a unique set of Classic Instruments with an oversize tach and speedometer in the center. The rest of the gauge package features individual instruments angled toward the driver, a technique that pays homage to a design found in an old 1969 Alfa Romeo Spider. It was a car that belonged to Joe’s father and one of his earliest automotive memories. AC vents were built into the dash and an Ididit tilt steering column holds a custom steering wheel. Dave’s Auto Trim in Morganton, North Carolina, accomplished the stitchwork. John Black from Black’s Collision Center in North Wilkesboro wrapped up the build, spraying shades of Deltron Sonic Titanium and Atomic Silver. 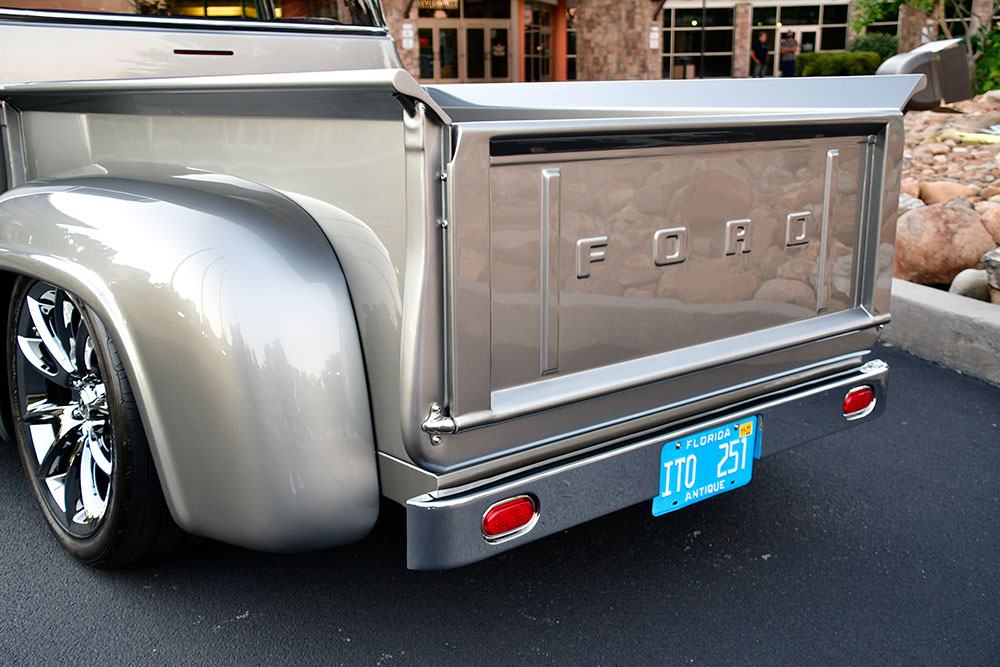 Although the truck is done and owner Joe Massaro has been involved throughout, he has yet to see it in person. COVID-19 has made it a lockdown build and pandemic border crossing restrictions have delayed the connection. Once the borders open, Joe plans to fly to the Carolinas and drive the truck home, making it the perfect get-acquainted, long-distance road trip. We photographed the truck at the F-100 Supernationals, where, in a gathering of almost 500 trucks, it captured the coveted F-100 Champion Award. In addition to a great ride north, Joe will have the truck’s first big trophy to keep him company on the way.