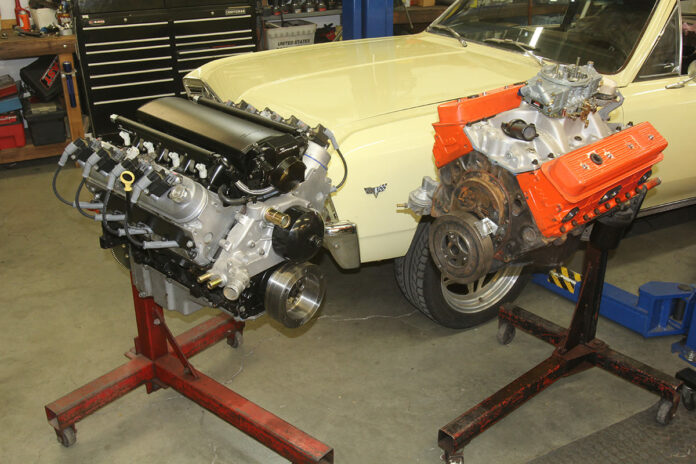 THE RELATIONSHIP BETWEEN VALVE ANGLES AND AIRFLOW

For the student of internal combustion, you’ve likely heard the oft-repeated line that an internal combustion engine is nothing more than an air pump. The reason that’s a cliché is because it’s true. The more air an engine can capture in the cylinders and then squeeze into making cylinder pressure, the more horsepower and torque it will make.

The title for this story might lead you to believe this is a treatise on valve seat angles. But it’s not. This story will instead focus on a far less popular but equally important topic of valve angles. We’re going to use the small-block Chevy family as our point of reference for this story because this engine has been around for over 60 years and has experienced a huge transition in valve angles.

Let’s start with its definition as the angle created between the centerline of the valve and the centerline of the cylinder. For the traditional small-block Chevy, its original production 23 degrees first appeared in the original 265ci small-block in 1955 and has remained that same number through countless millions of Chevrolet production engines.

Most performance enthusiasts know that there are advantages to reducing this angle to improve airflow. Jumping ahead to the Gen III LS engine, GM designers shifted that number radically to 15 degrees, making it more vertical. We’ll cover the details around that move in a moment. While it’s clear that pushing the valve angle to an ever-increasing vertical orientation offers merit, we thought it would be worthwhile to look into some of the details as to why this works so well.

The advantages regarding valve angle also include the area around the valve. Most production two-valve pushrod V-8 engines built in the last 70 years have been designed around what is called the wedge combustion chamber that places both valves in line. The other orientation is commonly referred to as a hemi where the chamber takes the shape of a hemisphere with the intake and exhaust valves entering from opposite sides.

Issues with the hemi are twofold. First, the design requires a large amount of engine real estate to package. Secondly, the hemispherical combustion chamber suffers from what engineers call a high surface-to-volume relationship. In other words, it demands a large space in order to position both valves. We’re not knocking the idea because, whether Chevy guys like it or not, the late model Chrysler Gen III Hemi flows a ton of air and makes serious power.

The dilemma presented by the small-block Chevy’s original valve angle is that as the valve opens, it moves the valve closer to the cylinder wall. Using early conservative lift and duration numbers, this wasn’t an issue. But performance enthusiasts quickly caught onto the idea that adding duration increased the rpm at which the engine could make more horsepower and added valve lift increased the amount of air and fuel that could be squeezed into the cylinder.

As the small-block Chevy progressed into the ’70s and ’80s, racing pushed the performance envelope. It’s important to remember in the history of the small-block that even at the beginning of drag racing’s “modern” era and the inauguration of NHRA Pro Stock in 1970, the premier engine builders of the day, like Bill “Grumpy” Jenkins, were still using production iron cylinder head castings. Aluminum aftermarket cylinder heads would not become available until the mid ’80s and were all still produced using the existing 23-degree valve angle.

Only later did high-end competition small-blocks like those in drag racing and NASCAR employ exotic cylinder heads with an 18-degree valve angle. NHRA Competition Eliminator racers were using Dart and Brodix heads and making great power. However, the most significant change to valve angle occurred not by way of the small-block Chevy but instead in the late ’80s and early ’90s with work accomplished by Buick V-6 factory engineers. The pinnacle effort was the Buick Stage II head with a 10-degree valve angle that pumped up airflow for the Buick V-6 for Indycar racing.

Richard Maskin, who owned Dart Machinery at the time, realized the advantages of the Buick V-6 Stage II valve angle and incorporated these developments into what became the Buick head for small-block Chevy engines. NASCAR disallowed the head, but drag racers immediately embraced its advantages and soon small-block Chevys were screaming down the dragstrip with 10-degree valve angle heads making killer power.

Besides standing the valve angle up, the Buick head also moved the valve to the actual true bore centerline, which created room for a larger intake valve. The standard large valve size in production 23-degree heads was 2.02 inches that racers occasionally bumped up to 2.05 or 2.08 inches. The relocated valve centerline in the Buick and later heads immediately created room for a huge 2.150-inch intake valve that could snuggle inside a 4.155-inch bore diameter.

This new valve angle also requires a much higher port entry. This is necessary to improve airflow while minimizing the turn as it enters the bowl area. On a typical 23-degree small-block Chevy head, this is a rather abrupt turn from the entry point to the bowl. Anytime the air and fuel must turn a corner, this creates flow restrictions.

A taller port entry radically reduces the flow restriction, which means for the same amount of time the valve is off its seat (measured in crankshaft degrees of duration), the cylinder can be more efficiently filled with air and fuel. That will make more power and often demands less cam timing to achieve that goal.

Beyond just the larger valve, another advantage to the taller valve angle is a shallow combustion chamber. The advantage here is that the chamber is more compact, requiring less volume, which means a large dome is not necessary to create compression. As an example, an older 23-degree head with a 76cc chamber on a 355ci small-block would require a bulbous, 22cc piston dome to produce a 12.5:1 static compression ratio using a 0.005 inch below-the-deck piston position and a 0.038-inch gasket.

A more modern and compact 12.5-degree Dart head with its 38cc chamber can create a much higher 13.77:1 ratio with a flat-top piston with 10cc’s of valve reliefs. Besides this added compression is the combined advantage of the requirement for less ignition timing. This occurs because less ignition advance is necessary since the flame front does not have to climb a large dome in order to complete the combustion cycle. Engines requiring added ignition advance will make more power, but that additional timing also creates negative work since after the spark plug fires the engine has to overcome the increasing cylinder pressure as the piston is moving upward in the bore. A more compact combustion chamber makes more power because it does not have to overcome that negative work.

Another minor advantage of the flatter valve position is that it allows a shallower valve pocket in the piston that does not intrude as deeply into the piston. This allows the ring package to be moved upward compared to older 23-degree style pistons. All these items add up to creating more power in a competition engine.

Of course we should also mention that the major airflow increases attributable to these taller intake valve angle heads also benefit from the latest knowledge with regard to port flow development. Port flow advancements have inexorably increased airflow even through restrictive 23-degree heads that now far surpass the best efforts of ’60s factory engineers.

Based on all the aforementioned benefits, it should not be too surprising that GM engineers would take advantage of these concepts when designing the next generation LS small-block Chevy. The original LS head utilized a 15-degree valve angle for both the intake and exhaust valves. A few years later when the 7.0L 427ci LS7 debuted, it raised the valve angle ante to 12 degrees and squeezed in a monstrous 2.200-inch titanium intake and 1.610-inch exhaust valve into its somewhat shallow 70cc combustion chamber.

Engine connoisseurs know GM didn’t stop there. When the curtain opened on the Gen V LT1 engine in 2014, the buzz was all about in-cylinder direct fuel injection. But carried along with all that hype was a subtle change in the cylinder heads that tweaked the GEN III/IV family angle of 15 degrees to an all-new 11.75 degrees. In addition, GM’s designers also added a compound angle of 4 degrees.

Think of the compound angle as emulating Chevy’s big-block cylinder head approach from the ’60s. The compound angle tilts the valve slightly to point it toward the center of the cylinder. This is done to enhance flow while remaining true to the wedge design to keep the chamber small. This tilt may be insignificant to the naked eye but the engine’s excellent horsepower-per-cubic-inch numbers reveal a more powerful story.

This latest production head angle of 11.75 degrees places it almost exactly half of the small-block’s original 23-degree starting point. It could be that the law of diminishing returns may finally limit this valve angle migration, but it’s more than possible that the production small-block’s valve position could slide into the single-digit arena. Dart is already there with its full competition 9-degree head and it’s always been the point that the racing community has been the one to blaze the trail that production engines then follow. Clearly, this is a great time to be a small-block Chevy engine guy regardless of the generation you choose. The angles all stack up in favor of more power.