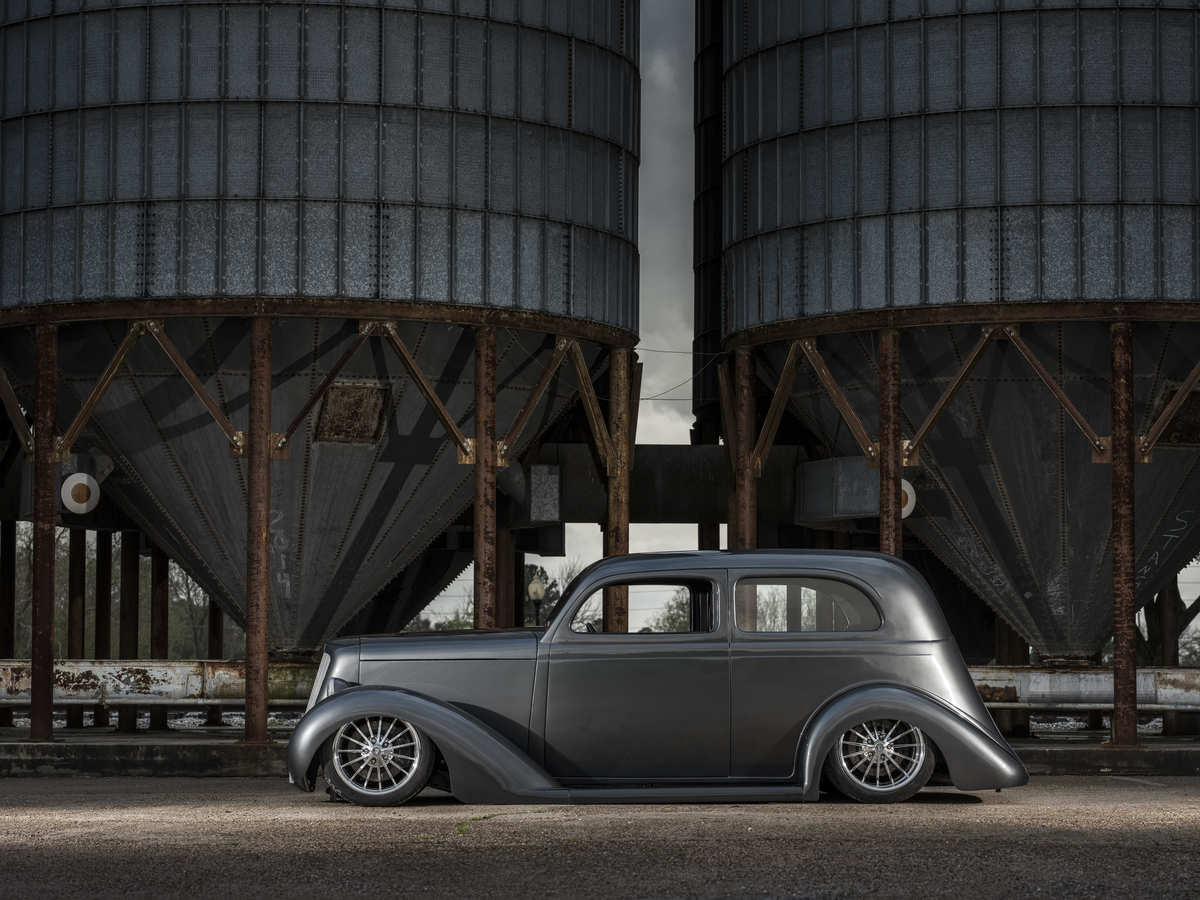 First some history on the 1935 Plymouth PJ, as we’re going to take a guess hot rodders haven’t seen many of these over the years and most assuredly not one done to this level of excellence. Kent Ladner out of Katy, Texas, definitely took this once businessman work vehicle to new heights, but here’s a little background. 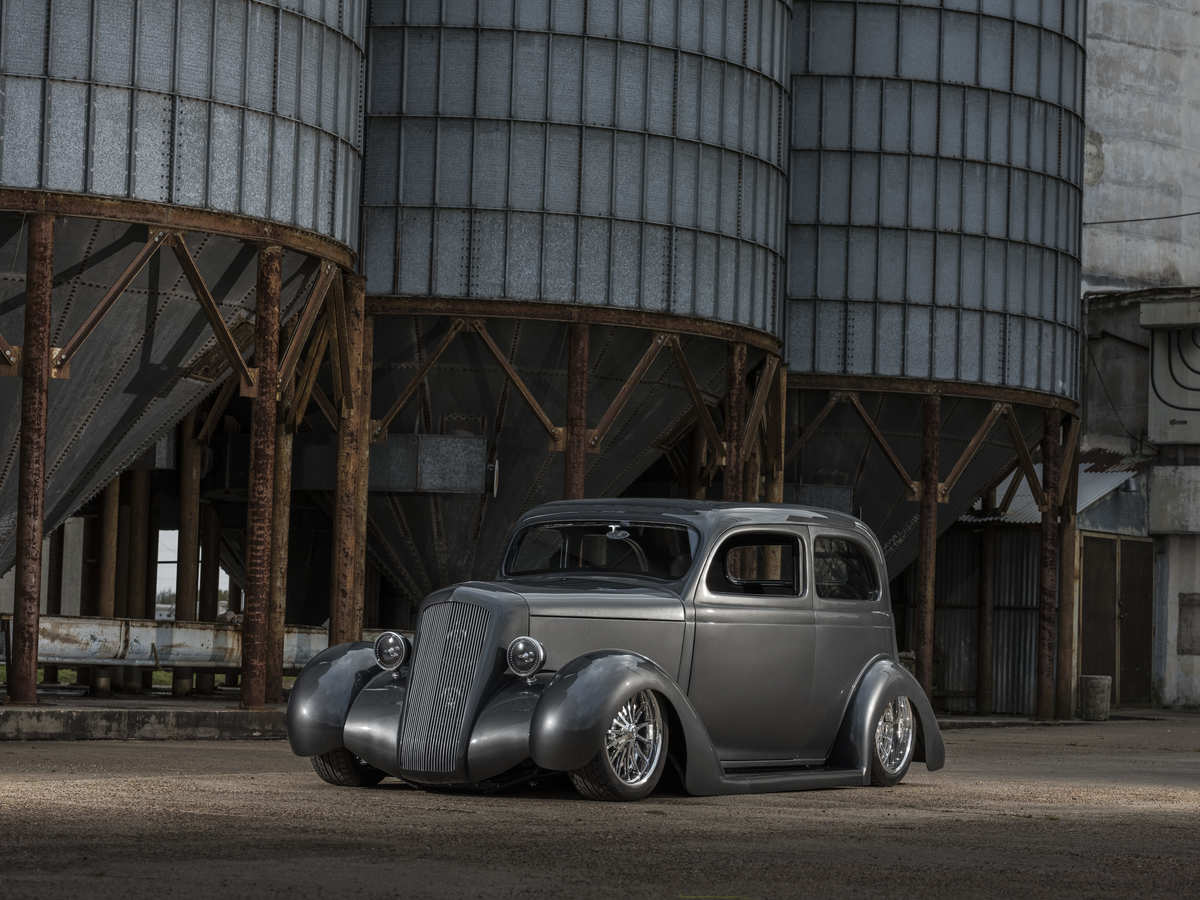 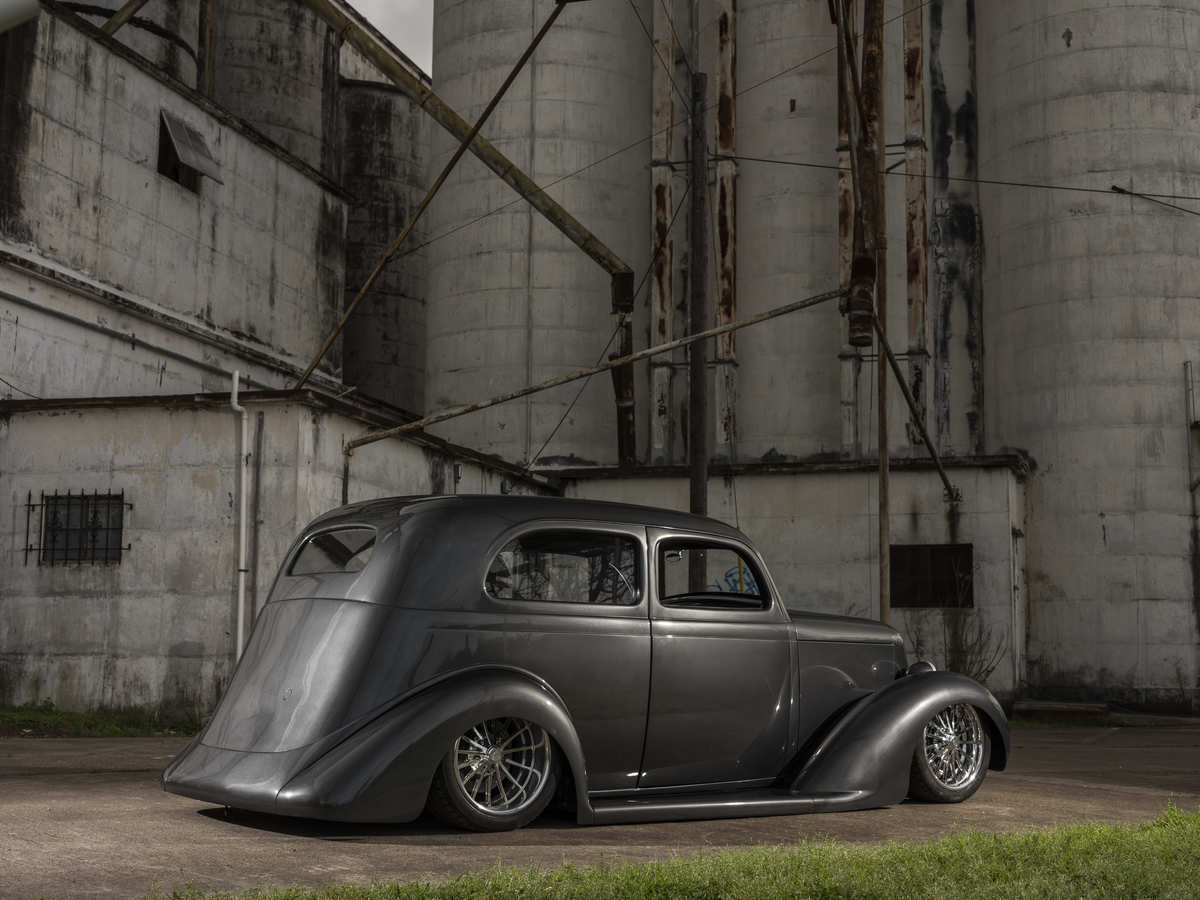 For the 1935 PJ model line there were advancements in water cooling as well as the ignition (now Autolite); add these changes, along with a rise in engine compression, and now the same displacement engine (six-cylinder, 201 ci) from 1934 featured a horsepower jump. In fact, in 1935 there were two versions of the six-cylinder: the basic powerplant at 65 hp (5.1:1 compression) and the upgraded motor at 85 hp (6.7:1 compression). Couple this power along with major suspension improvements and now Plymouth had a car that would run 80 mph. This was also the first year that Plymouth lowered the frame around the drivetrain. This change resulted in a lower center of gravity, enhanced handling and ride, and then introduced the center hump for driveshaft clearance. Something all of us continue to recognize. 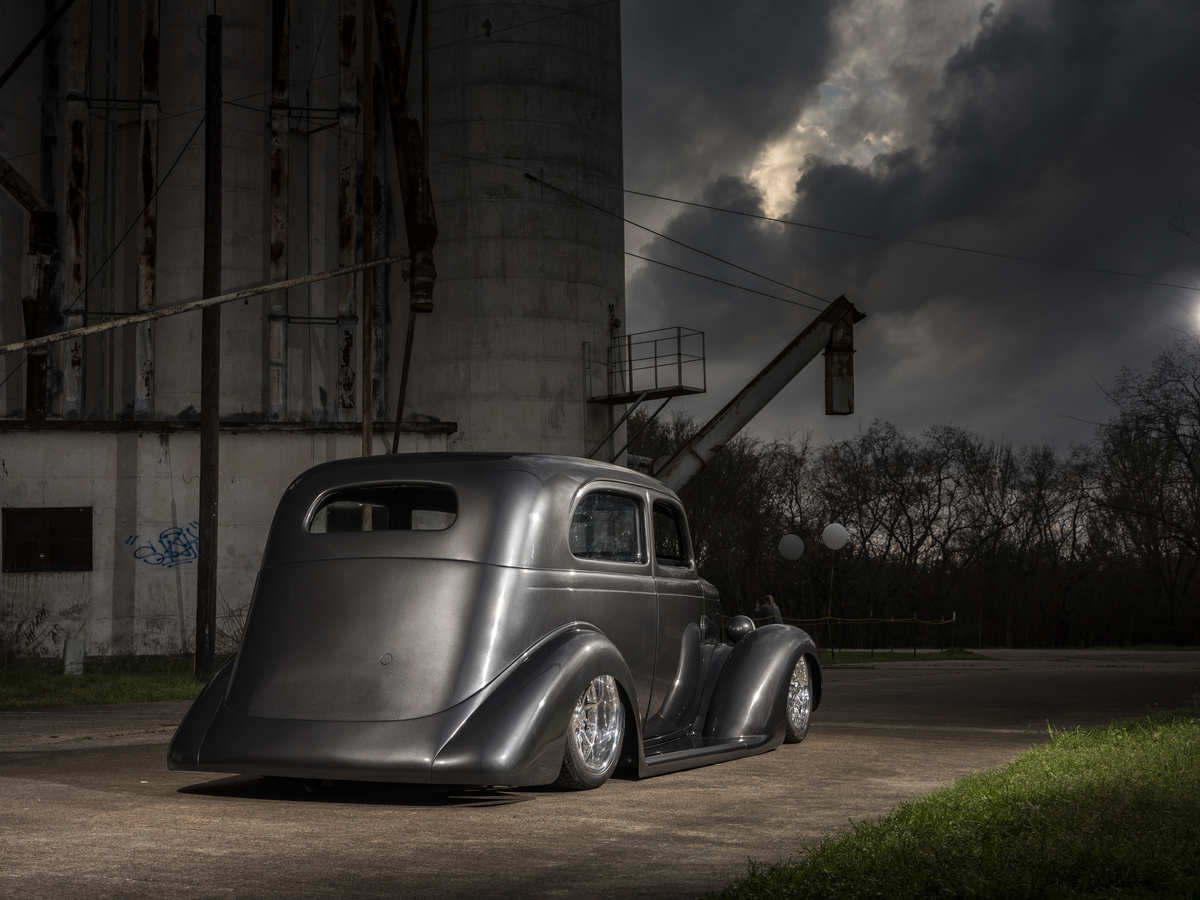 The PJ: Two Cars in One

It was a time in our country when businessmen spent a great deal of time on the road, and oftentimes their samples went along with them … riding in the back. Plymouth built a two-in-one vehicle in 1935, 1,142 commercial sedans based on the Business Six two-door, ending up with the rare PJ, which had a rear third door. Cardboard panels easily snapped into the quarter windows displaying the business name and contact info; once home, these cardboard placards could be removed and the PJ would transform back into a family sedan. 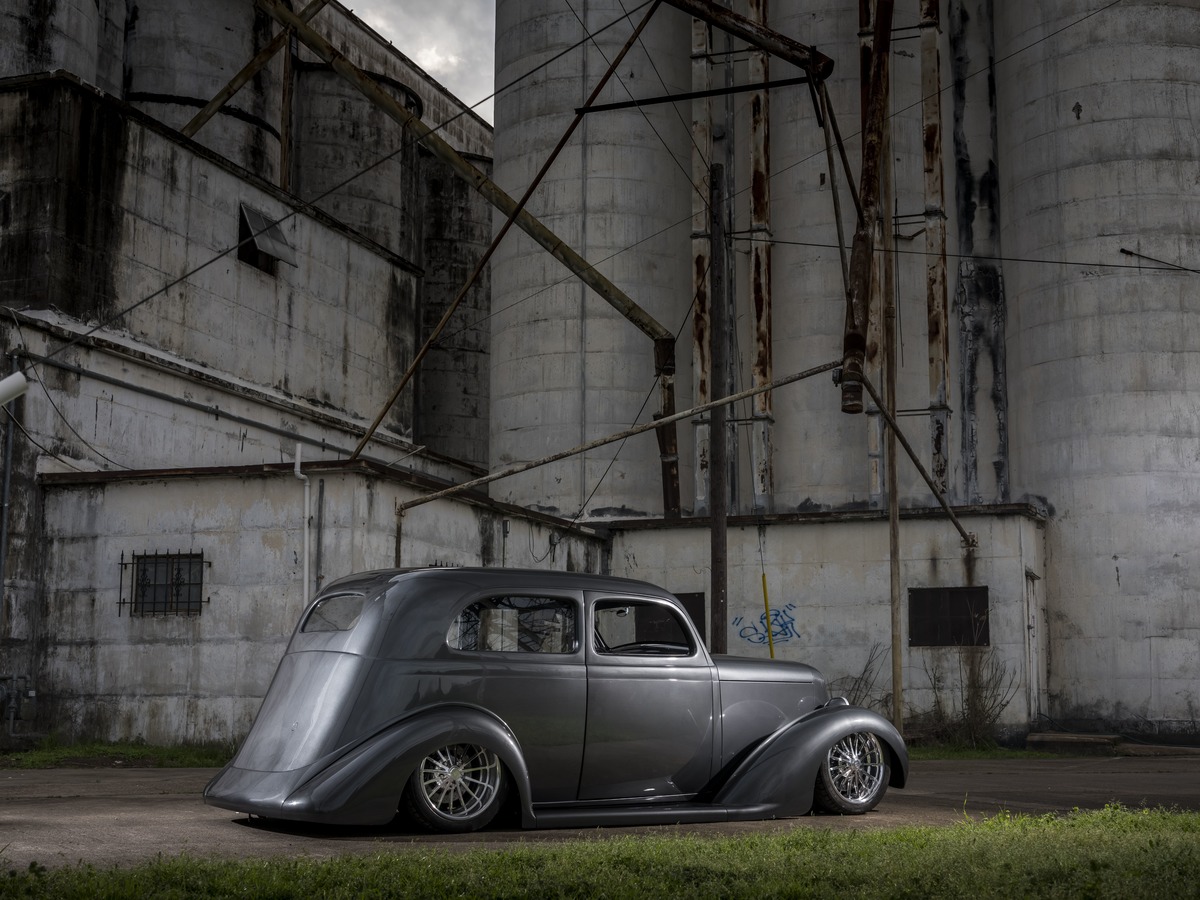 PJ Sedan as a Street Rod

We asked Ladner for some input on where he got his Plymouth and a bit about the journey and here’s what he told us:

“The car was just a rolling chassis and body when I bought it. One of the front fenders was caved in, and one of the rear fenders was bent up pretty badly. As soon as I got the car home I started cutting it up, repairing the rust in the rockers, doors, and lower rear sections. Next, I removed the floor and took everything off the frame but the two ’rails. From here I designed the front suspension after S-10 geometry coupled with a Mustang rack-and-pinion steering using a drop link to mount the S-10 inner tie rods. The goal was to reduce bumpsteer. In the rear I narrowed the frame 5 inches, notched it for clearance, and used an Ekstensive Metal Works two-link with track bar. Once I had the foundation handled, I moved onto the body.

“After three tries to English wheel a large low-crown roof panel in one piece and failing, I built it in three sections and welded it up. Next, I designed and built a larger radius 90-degree break on my welding table to make the smooth-running boards. Then, in my opinion, the ugliest part of this body style was the grille shell. I sectioned and laid the shell back to look more in-tune with the windshield angle, all the while keeping the original hood side to grille location. As a result of sectioning the grille the once-flat hood angle was now raked and more forward leaning. The new grille shell dimensions meant I had to make a new grille. 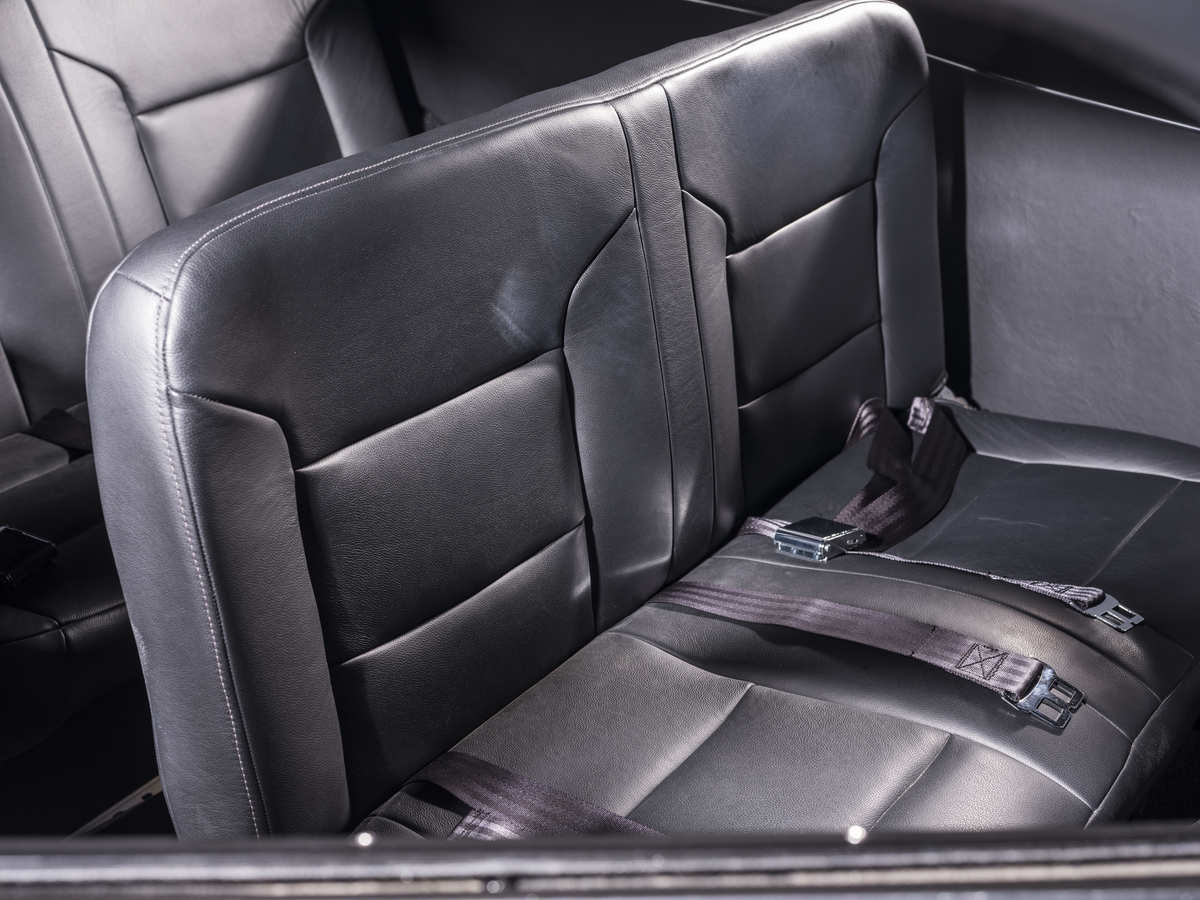 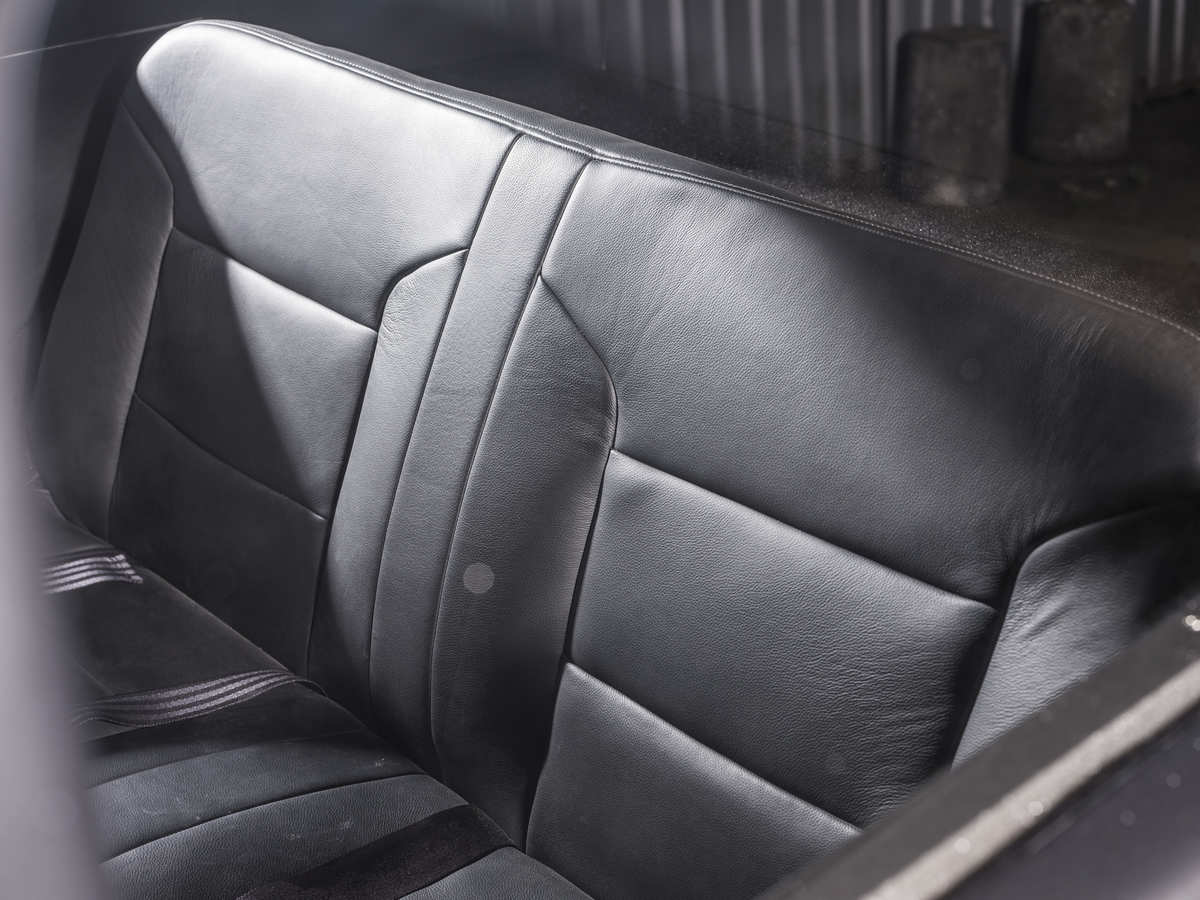 “The dash now houses the A/C, fuse block, EFI and trans computers without any component hanging below the dash, which was important to me. Next, I spent a long-time body-working the car—not my favorite part! Then I painted the car in my two-car garage and, afterward, had my buddy Chris Eshelman cut and buff the paint. From here I then designed a very simple interior that was wrapped in black leather. The seats are modified modern seats wrapped in leather sewn by my mom, Vickie .” (Editor’s note: Way to go Mom!)

This car was 100 percent built in my garage, which includes all of the metal-, body-, and paintwork; the upholstery; wiring … and, in typical family fashion, the work was done at night after the kids went to bed­.”

That’s an amazing story, and one we have heard many times with hot rodders from around the country. While Ladner pretty much tells the entire story, we thought we would go over and fill in some of the blanks to tell you “… the rest of the story.” 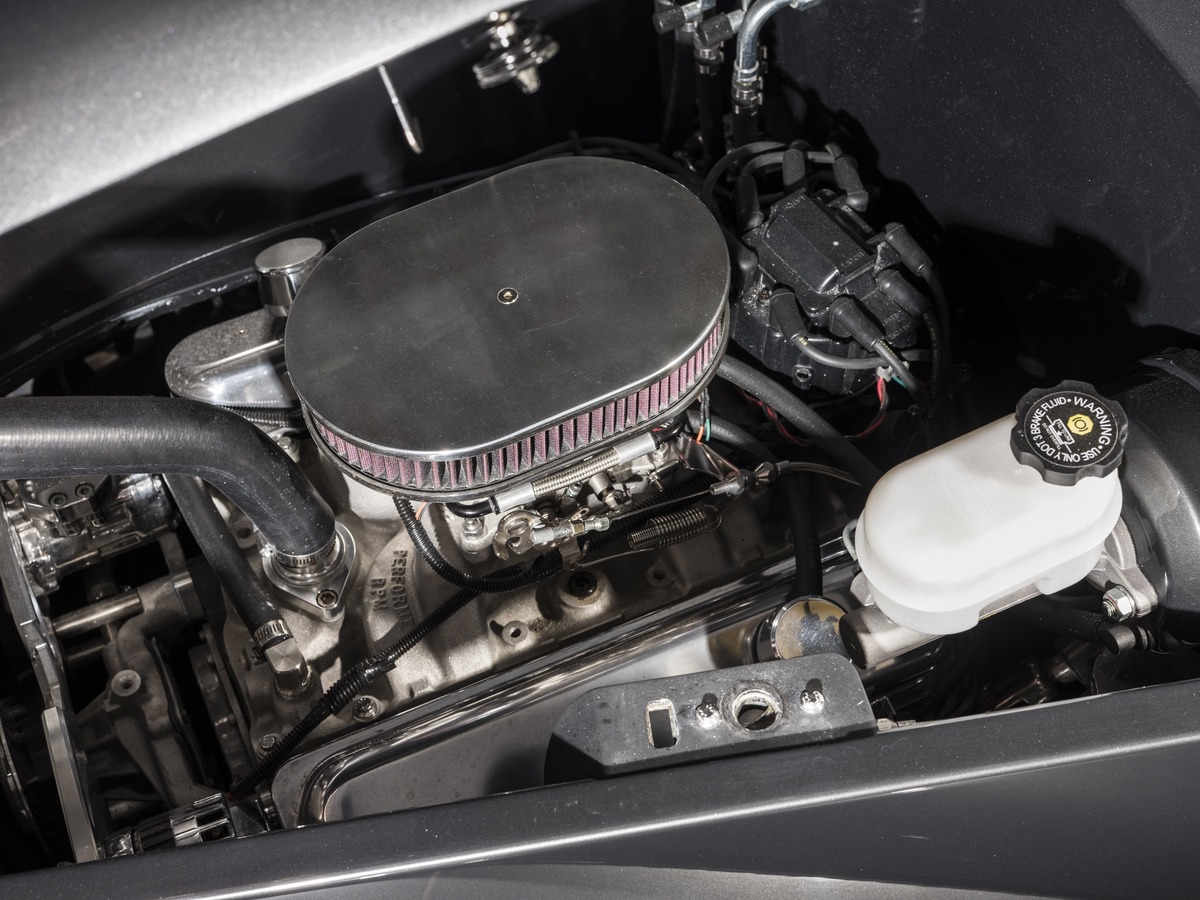 The Plymouth has logged miles, with its longest trip right at 600, all under the reliable banner of the 350 small-block Bowtie featuring an Edelbrock intake with a FAST EZ- EFI, controller, and plug wires, along with a FiTech fuel pump, GM HEI, and stainless block hugger–style headers, mufflers, and the remainder of the exhaust system. Bolted to the SBC is a 4L60E utilizing a TCU controller while a Lokar shifter selects the gears. Cooling chores fall to a March Performance serpentine belt system and alternator, Flex-a-lite electric fans, and a radiator from Summit. 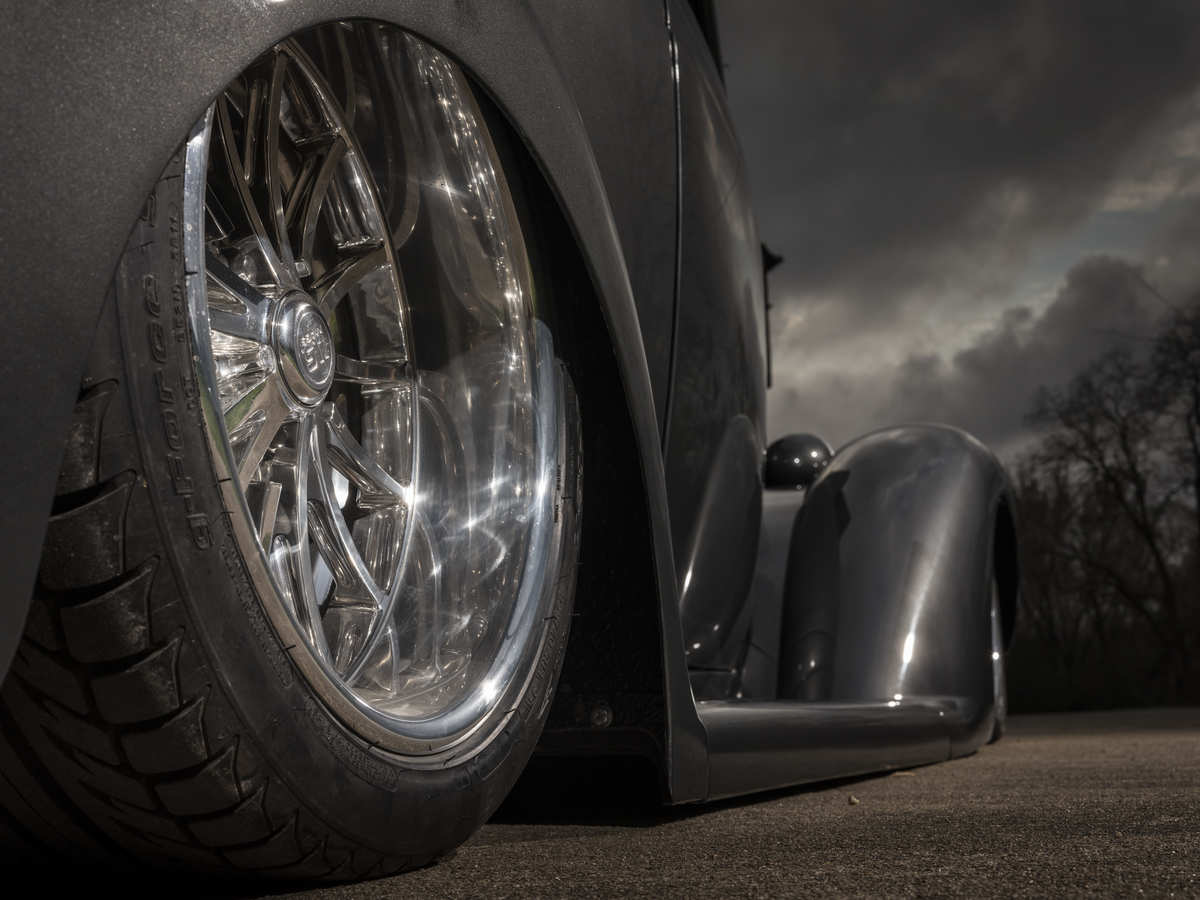 The chassis is based on a stock frame that has undergone substantial modifications and was then fitted for a custom 16-gallon gas tank out of an Isuzu NPR truck (commercial box van). The IFS suspension is based on Chevy S-10 geometry with Firestone airbags while the rearend is an S-10 narrowed 1-1/2 inches and spins 3.43 gears with Moser axles. Early it was mentioned that an MII rack-and-pinion was used and it is twisted by a Flaming River column that’s topped with a Budnik Knife model steering wheel. At the corners you will see Chevrolet braking but it’s a combination of Corvette Z06 rotors and Silverado pickup calipers … interesting combination. Getting all of this to ride down the road are US Mags from the Heritage collection, measuring 18×8 in the front and 18×10 in back, wrapped in BFGoodrich Sport COMP-2 rubber, measuring 215/45ZR18 and 255/40ZR18. 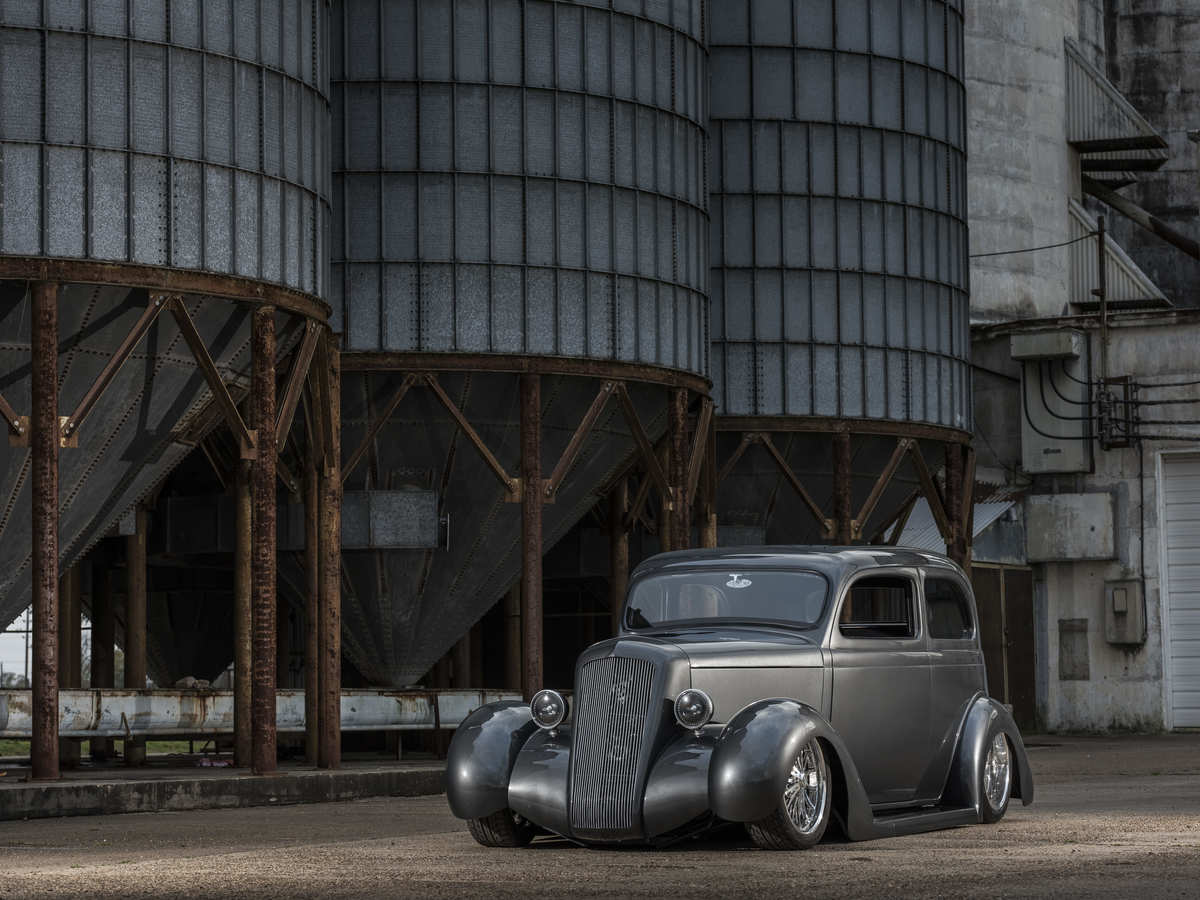 The sheetmetal, while all original 1935 Plymouth, did need a great deal of attention and Ladner provided the tireless effort and copious hours required to get it to accept the PPG Charcoal Gray. From here  Eshelman helped with the cutting/polishing of the paint to bring it to its final luster. Before the body- and paintwork was rendered, the grille shell was sectioned 4 inches (height) and laid back approximately 3-1/2 inches. This allowed the factory hood side panel locations to be retained while maintaining the bodyline flow in relationship of the grille to the windshield. Next up was the hammered-at-home hood, side panels, and hinges, along with hidden door hinges, smooth running boards, filled roof, firewall, and flooring throughout. If this wasn’t enough time on the English wheel there was more time spent removing and replacing the rotted rockers and lower rear sections of the body. While this was going on Ladner also made sure to narrow the inside wheelwells 5 inches to accept the oversized wheel-and-tire combination. 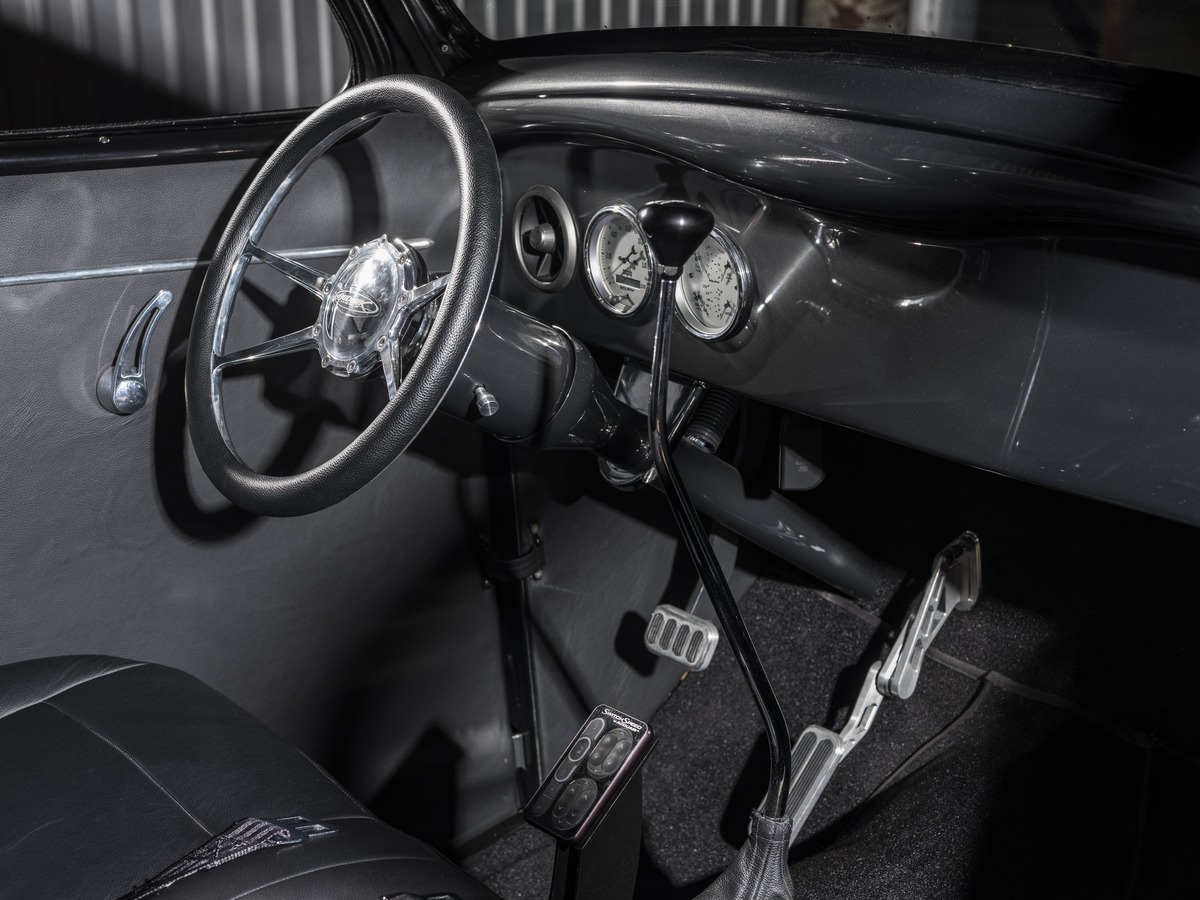 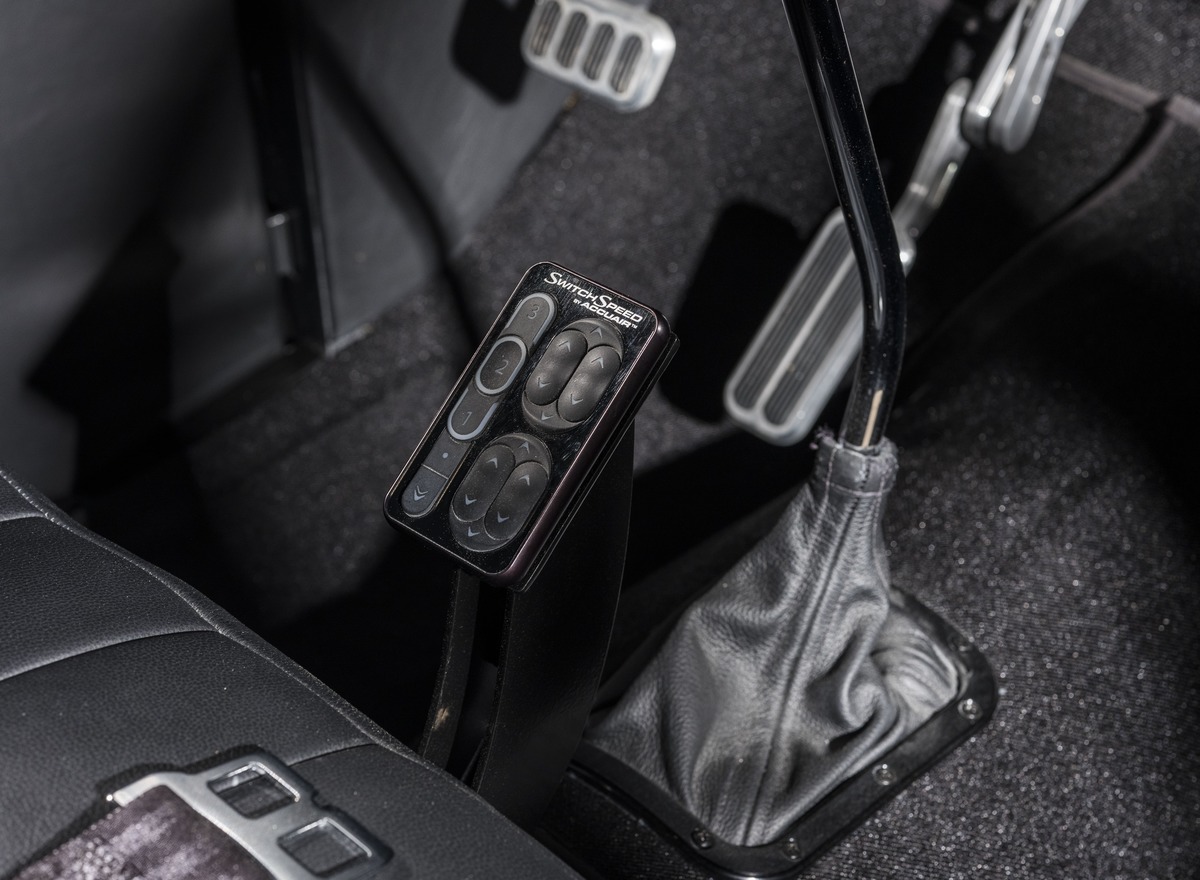 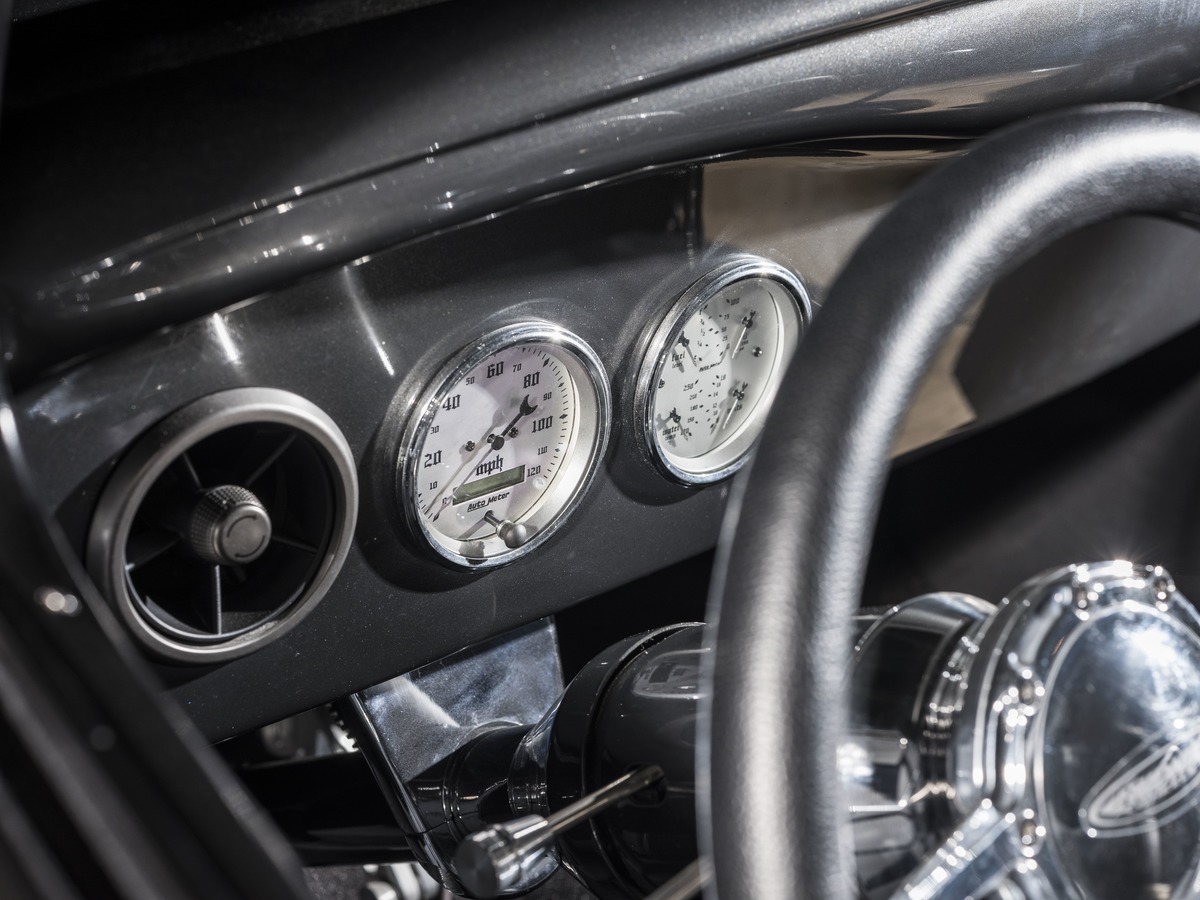 Inside you will see a stock Plymouth dashboard but it is now fitted with use-specific gauges from Auto Meter Custom Shop. The wiring was handled by a Speedway Motors kit and it links the gauges, Southern Air A/C coupled with Vintage Air hose kit, ignition, and the myriad of electrical connections required to get a modern hot rod going these days. The headliner is black leather as is the seat cover material, and they were stitched by Vickie Ladner (mom!). The carpeting is also black but in a Daytona weave.