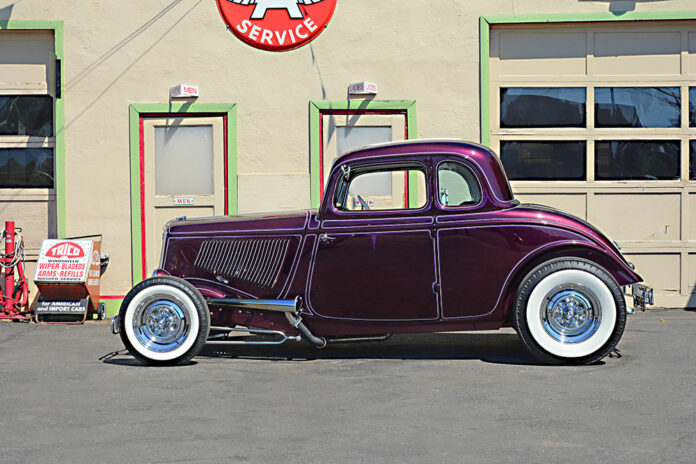 This 1960s-style hot rod is a fenderless coupe with a pure throwback style.

By Dale Moreau – Photography By the Author

Debbie and Robbie Davis’ ’33 Ford may be the epitome of the ’60s era. From its wild purple paint, pinstriping by Mitch Kim, to its channeled body-over-the-frame stance, it screams traditional 1960s hot rod. This 1933 Ford Five-Window Coupe exemplifies cool, in an era of white T-shirts, bluejeans, and car hops. 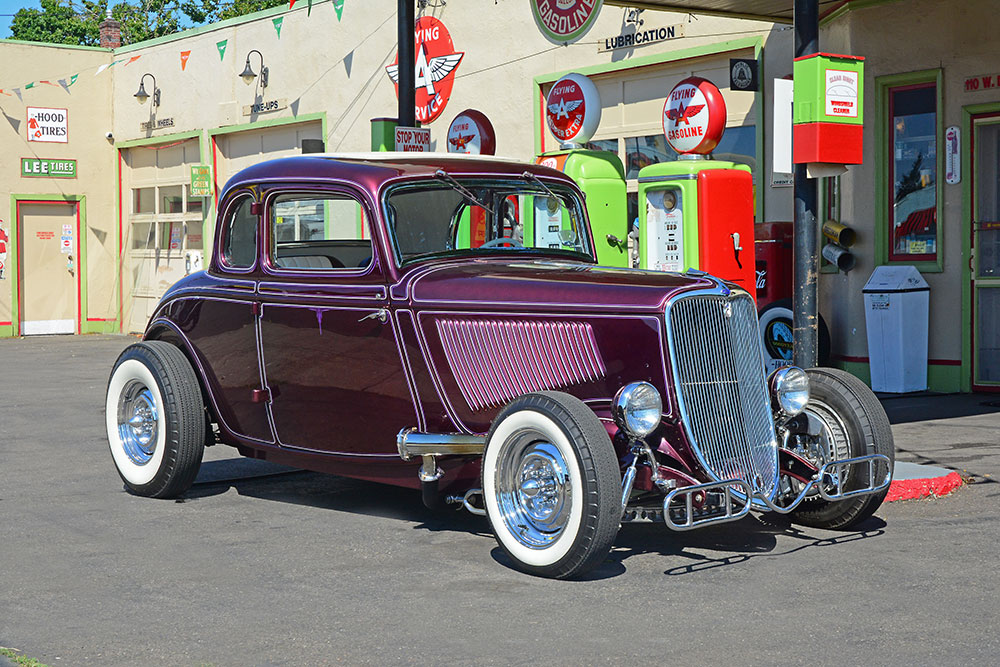 The racing and “hot rod world” has had many changes since Henry Ford won his first race with a car he built. Customs of the day and what was the “in” thing at the time have come and gone. Now, as we look back at the highlights of the progression of these likes and dislikes, we tend to put them into categories—like the ’30s, ’40s, ’50s, and so on. When we look at old photos and see what defines each era, we see many shifts of what the people of each era thought was the best.

The 1960s was a period before radial tires. The 5.60 and 7.00 bias-ply wide whites by Coker and 15-inch American Classic chrome wheels are a few of the defining points that make it so, as is the fact that it’s an early 327ci small-block Chevy with a Weiand intake manifold topped with four Stromberg carbs. That transition alone says it was time to put the Flathead out to pasture. 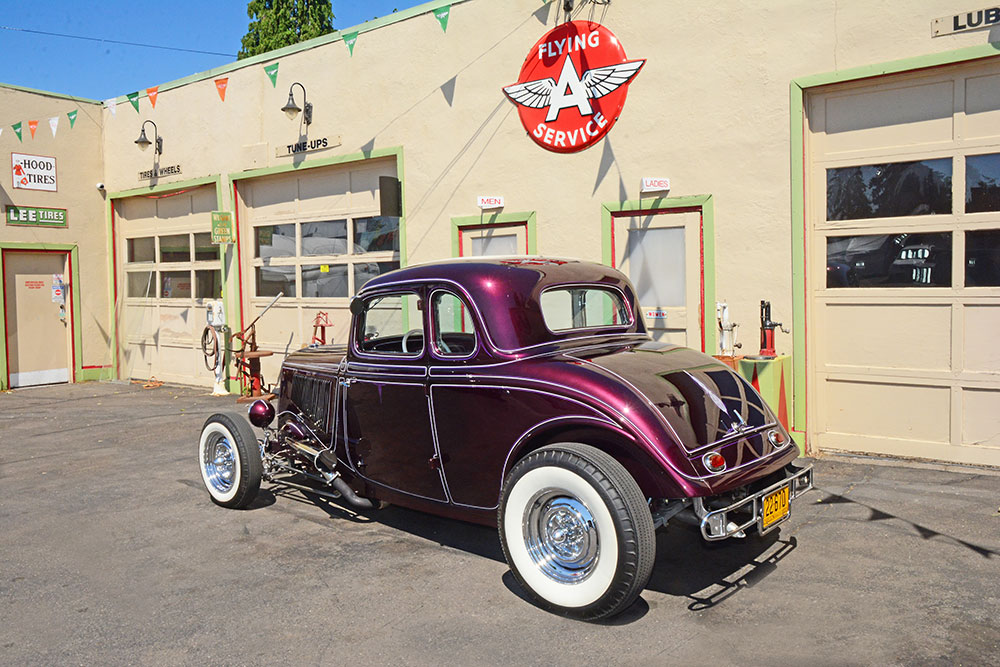 The old three-speed gearbox was upgraded to a Muncie four-speed stick with a cool red shift knob. Interesting enough is the fact that it still has its original frame but with an early ’57 Ford 9-inch axle.

The car has its ’33 Ford front axle with a bit of bending to drop the front, which is tied to the frame with a hairpin-style front suspension. Those huge Buick drum brakes indicate an upgrade from Henry’s mechanical ones, a much better way to handle the increased horsepower that now lurks under the hood. The nerf bars are a throwback from the ’30s Indy-style racing cars, and make a cool custom replacement for the original bumpers. Headlights are later models that actually light the road at night while the taillights appear to be ’47 Chevy. 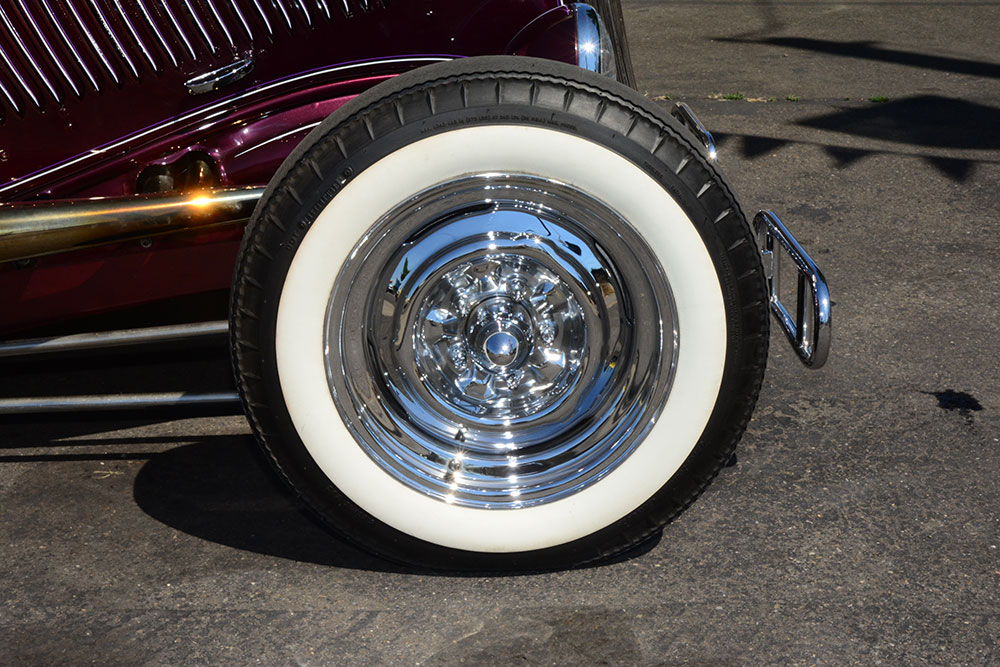 Climb into the cockpit of this traveler in time and you will find an epicurean’s delight of the period. Maroon and white “naugha’s” are finely stitched to long-forgotten bucket seats in tuck ’n’ roll style that carries onto the door panels and headliner. 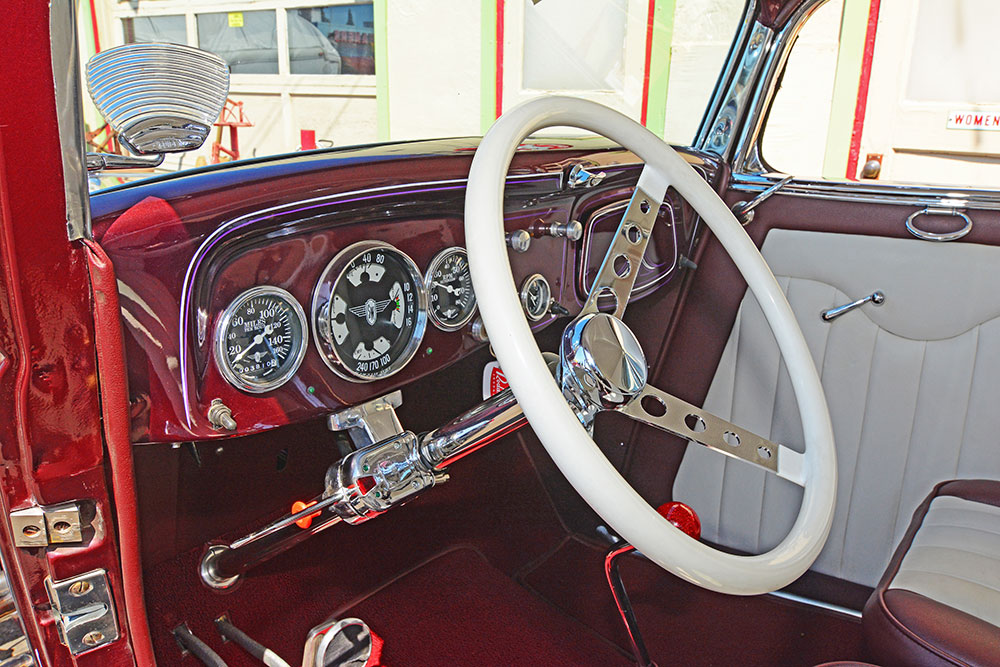 Chrome plating abounds in the window frames, steering column, wheel, and even the clutch and brake pedals—speaking of which are strangely both on the left of the steering column. It is very difficult on these early Fords to find space for them, especially with a standard shift car. Some builders turned to setting the engine aside a few clicks to make room for the steering column to come down straight through the firewall. It’s a tricky call, to say the least. Peering over the white steering wheel that was the choice in the day, we see a perfect array of Stewart-Warner gauges.

Debbie and Robbie Davis actually drove from Oregon to Massachusetts to buy the car. As it is with many cases, it was sorely misrepresented. A lot of years had passed and so had Alex Velis of South Hampton, Massachusetts, the original builder. So many of the details of the original build are lost in the mists of time. 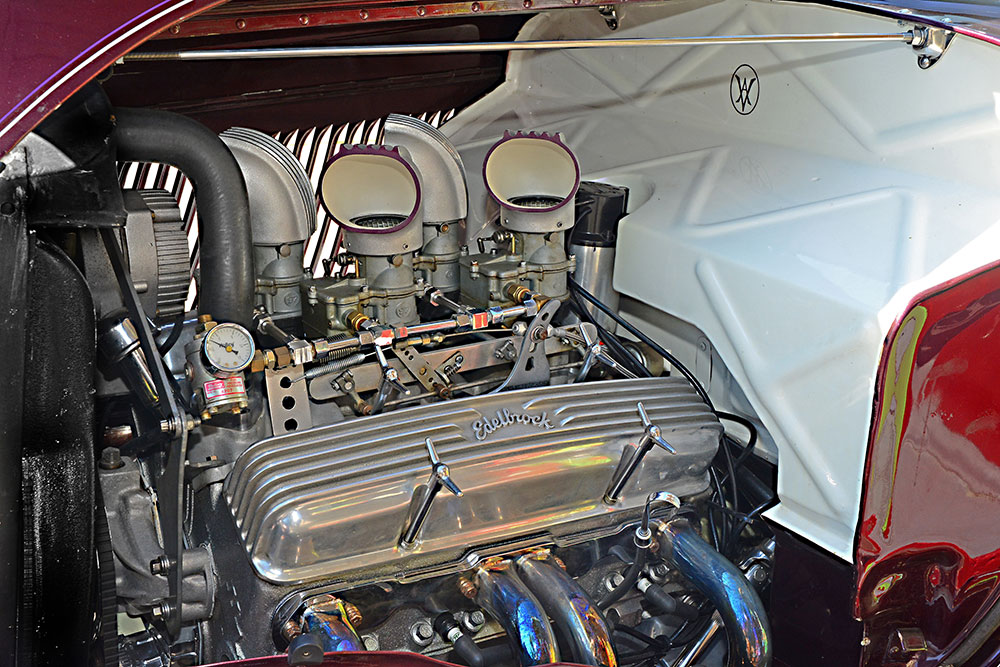 But Robbie prevailed and restored the ’33 Ford to what Velis envisioned many moons ago. Debbie now has a car that she can drive anywhere and wow onlookers at every stoplight. She may even choose an unsuspecting victim with a hot Camaro or better yet a 911 Porsche, and all they will see are her two taillights. Wouldn’t that be sweet? MR