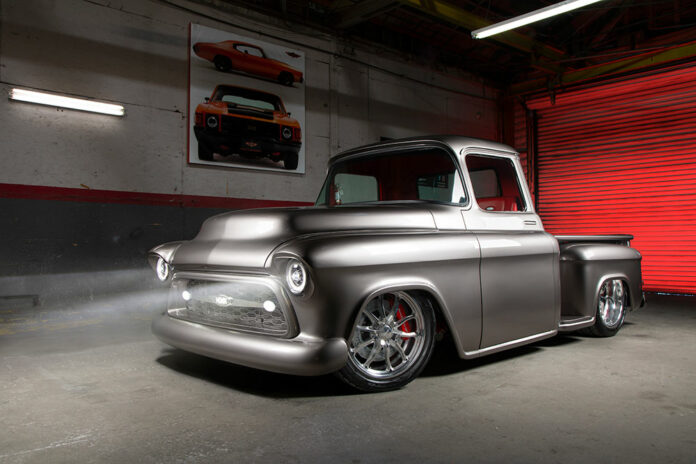 Most builders know that balancing between work and family life is a hard struggle. This goes especially for those who own their own speed shops as it takes many personal sacrifices to create a successful business. Working late hours to finish projects to help grow your name can take a toll, and if you’re lucky you have a family who will stand by your side in order to turn dreams into realities. 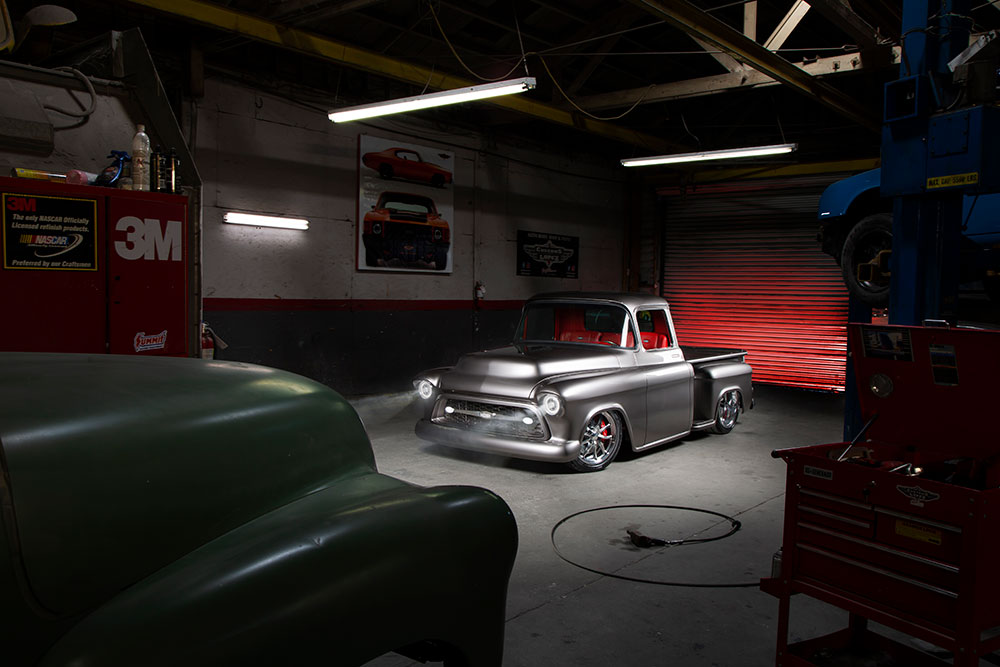 Ricardo Lopez is a third-generation automotive builder who took knowledge from his family in Mexico to create his own shop called Customs by Lopez. Based out of Compton, California, Ricardo was able to prove that it doesn’t matter where you come from as long as you have persistence and dedication to your craft. With help from his wife, Monica, Ricardo was able to get his business off the ground. With lots of hard work he was able to grow the speed shop, and people have taken notice. Over the last few years, Ricardo built a few rides for the annual SEMA Show where the big boys bring their best stuff to impress the world.

Now on a roll with the speed shop, Ricardo thought it was time to repay his wife for all the hard times spent in the past. About seven years ago he was able to pick up this 1956 Chevy truck and in 2020 he decided it was time to build it for his wife to enjoy. To up the challenge, he decided to finish it for the 2021 SEMA show, which is always a huge challenge. Long hours after regular work days are the norm when building hot rods to be at the show, but that’s what separates the men from the boys. 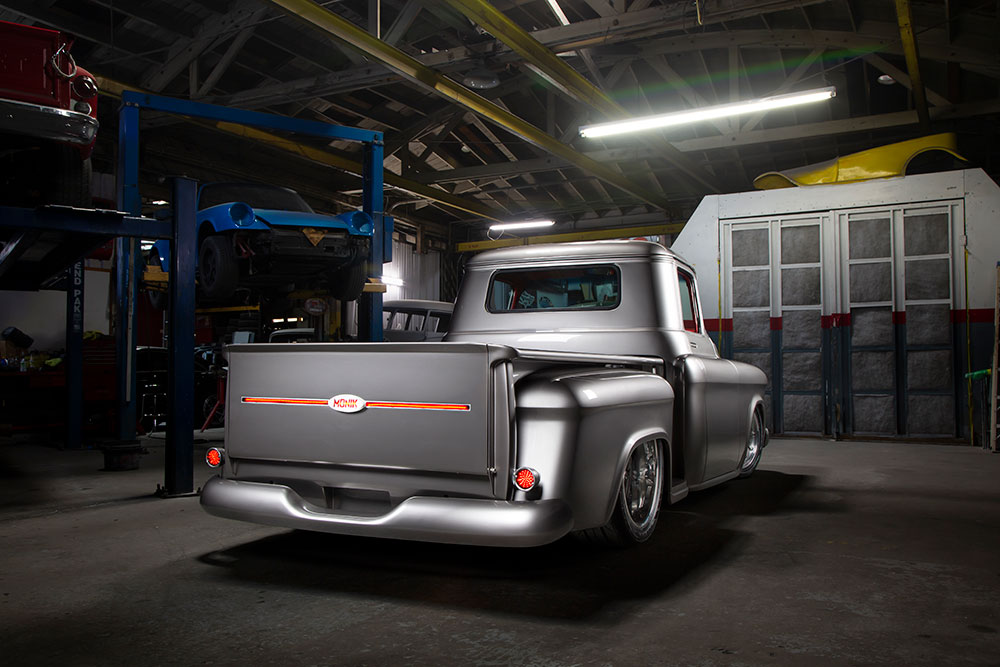 One of the goals for this hot rod project was to have it sit low while making it perform. To accomplish this, the front clip of the frame was replaced by one sourced from a second-generation 1978 Chevy Camaro. It was then equipped with drop spindles and Ridetech control arms. In the rear is a custom four-link with Panhard bar to hold the 9 inch rear end in place. On all four corners are Ridetech coilovers along with 14-inch/six-piston front and 12-inch/four-piston rear Baer brakes. 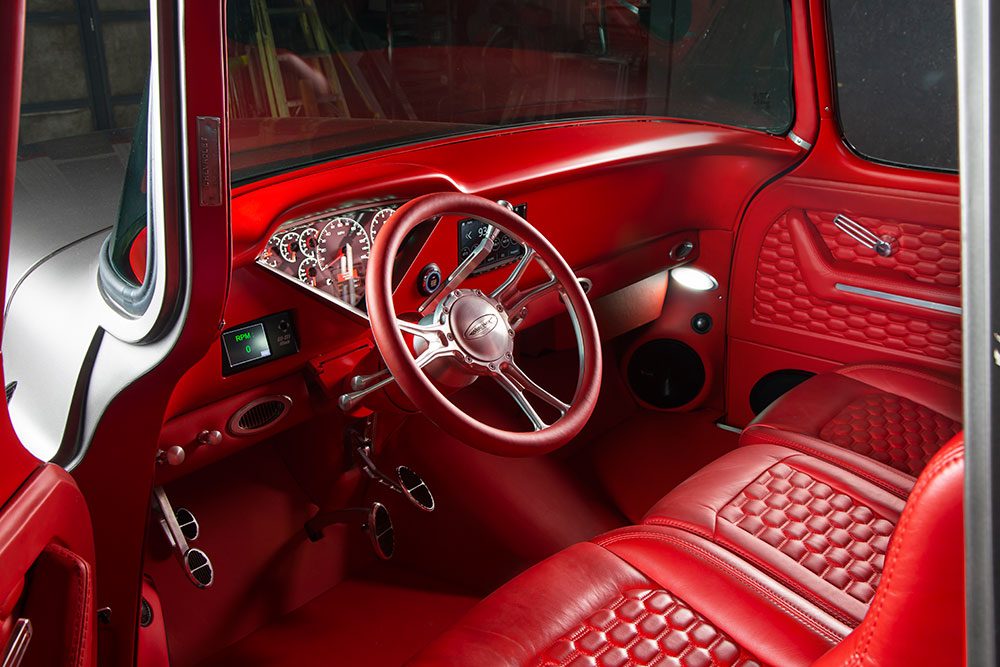 Making the most of the suspension stance, the old truck sits on a set of billet 19×8 and 20×12 Spyder style Budnik Wheels. The rears were covered in a pair of 315/35R20 Nitto NT555 RII tires to slay the competition off the line, while the fronts have a set of 245/45ZR19 Nitto NT555 G2 tires with matching tread patterns. As you may have noticed in the photos, the fitment of these rollers was tight but they look oh-so right.

Powering this truck is a tried-and-true 383ci stroker Chevy small block V8 that is combined with a Turbo 350 transmission. Making this engine run smooth is a FiTech Ultra Ram SBC EFI unit and a set of Hedman Hedders connected to a custom MagnaFlow exhaust system installed by Team MPE at Mike’s Performance Exhaust. The powertrain was painted and given a treatment of Billet Specialties valve covers and an Eddie Motorsports accessory drive system. It was all connected electronically by an American Autowire harness installed by Ryan Manson of Clampdown Competition. 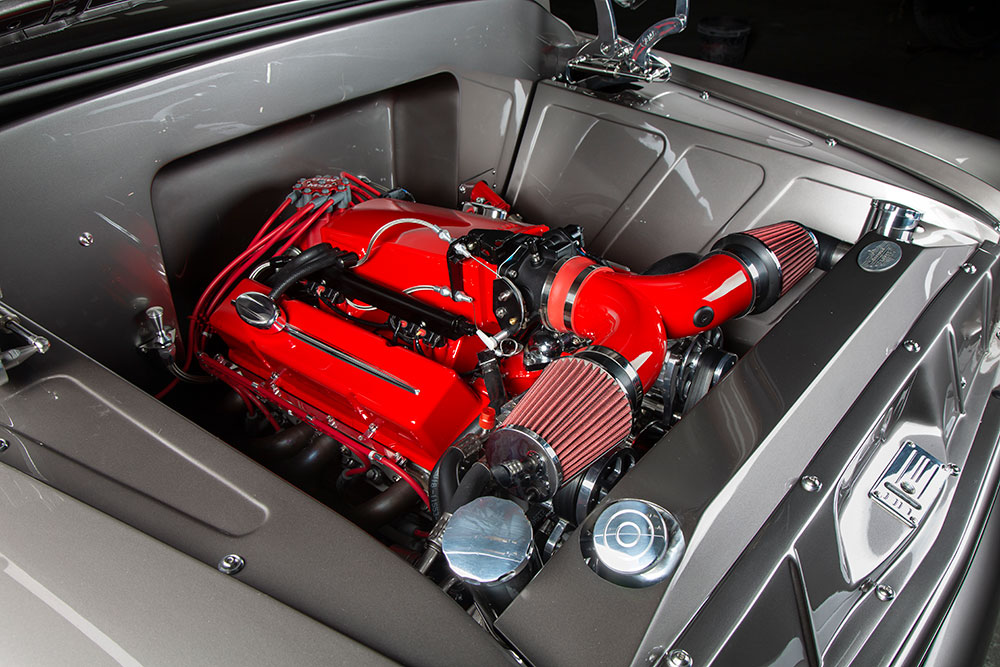 Though Customs by Lopez is a one-stop shop, the specialty there is paint- and bodywork. To display this, the body of this truck has been completely straightened out and smoothed. For extra styling, the factory grille was replaced by a custom one with a unique pattern by Andy Guerra of Limitless Fabrication. The doors were shaved and new Kindig-it Design handles were added for a superclean appearance.

Moving back, the 1956 Chevy pickup truck bed was shaved of the stake pockets and it has custom smooth steps. The all-metal bed rail has a molded spoiler that extends to the tailgate, which has a custom LED light bar. Underneath it is a roll pan that sits behind the shaved and tucked rear bumper. Once all the mods were done, Ricardo laid down a custom silver mixed with House of Kolor paint. Taking it all up a notch is the bed floor from BedWood that was painted House of Kolor Kandy Apple Red. 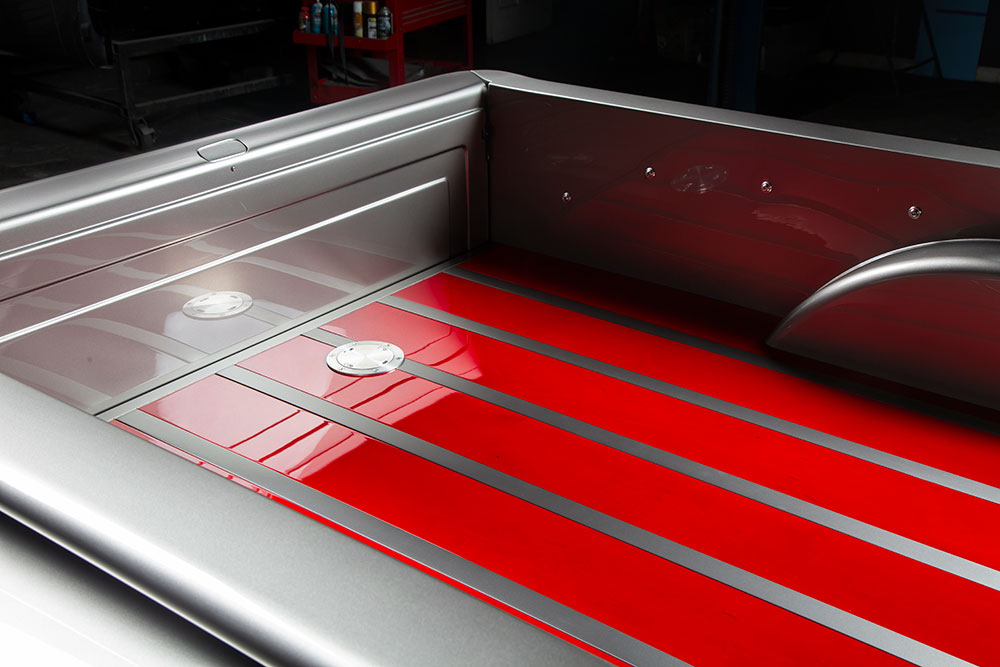 On the inside the dash was shaved and only has a few components, like the Dakota Digital gauges, FiTech EFI controller, and stereo head unit with 7-inch display. An ididit steering column was also mounted up with a Budnik steering wheel that matches the wheels it rolls on. Other custom pieces include the Vintage Air climate control and Lokar Performance billet pedals. A set of modern electric bucket seats were mounted up and the entire interior was reupholstered in-house with the use of red leather that has a stitching pattern to match the grille.

While Monica gave her input on the styling of this truck, Ricardo did all the hard labor to ensure she has the vehicle she deserves. Once complete, the truck was loaded up to be displayed at the 2021 SEMA Show where it completely turned heads. 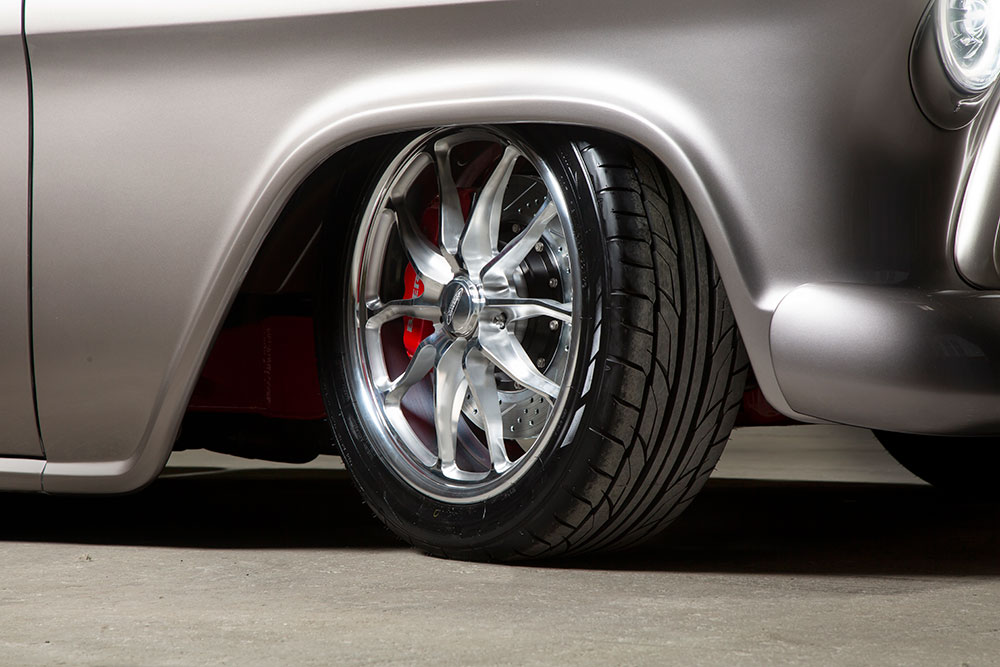