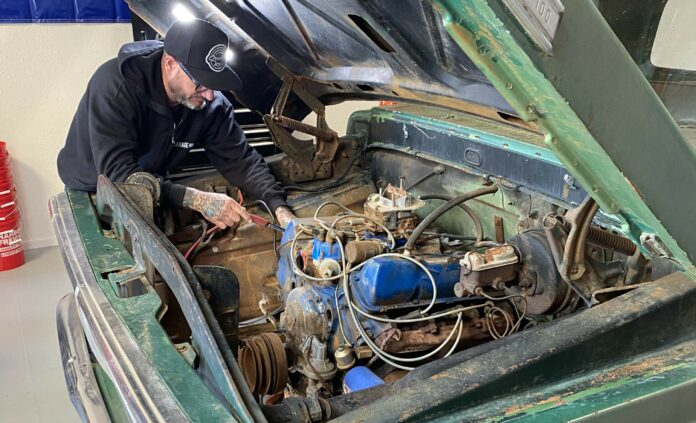 Duralast Helps Revive (and Drive) an Old Ford Pick Up

I can’t speak for everyone, but for me the phrase “the one that got away” applies to more than one vehicle, as I’ve let a number of cars, trucks, and even old Harleys go that, to this day, I wish I still had possession of. Whether it was due to a financial need (often to purchase another vehicle!) or an offer too good to refuse, my will to hold on has been adversely tested more often than I care to remember.

While I’ve had the opportunity to buy back a couple of those I regrettably let go, the extremely inflated price just doesn’t always allow it to happen. Fortunately, that scenario recently arose for my publisher, Tim Foss, with an old four-wheeled childhood friend of his—and as he’s about to tell in his own words, this is no ordinary old truck, either.

“In 1973 my dad purchased this 1972 Ford F-100 4×4 pickup, and I loved it. Growing up in the country, at the edge of the desert, I enjoyed borrowing my dad’s truck, having lots of fun desert driving the truck every weekend with my friends. I did this for four years, then in 1976 he purchased a new F-150.

“I was fortunate enough to purchase the 1972 Ford from him, but unfortunately for me, I worked off the purchase with ranch labor in the grueling desert sun. Being that I was only 14 at the time, I spent several long hot summer days of work and every weekend to pay for it. Hard labor worked out and I owned the truck throughout high school and spent a lot of time with it in the Yuma sand dunes and desert.

“Looking ahead to college my dad thought it would be a better idea to give up the F-100 and buy a Datsun pickup, so in 1981 I sold it to a friend who owned it for a short time. It was one of the most difficult things I have had to sell and through the years I continued to look for it to buy it back. I moved away from Yuma in 1984 and lost track of the truck, but my quest to find it never ended. It was almost an obsession, and nearly drove my wife crazy, as I was always pointing out a similar truck followed by a list of things I’d point out confirming that it was not the truck at all!

“Surprisingly, in 2012, my brother found the truck sitting in front of a body shop in town (but then again not so surprising as this stuff can happen in a small town) and stopped to look at it. Because of the unique paint color, he identified that it was indeed my truck. After my brother called me with the news, I contacted the owner of the body shop to try to get the current owner’s phone number. That didn’t happen, but the shop owner agreed to give my number to the current owner, so I waited. I was anticipating hearing back right away, but once again that didn’t happen.

“It wasn’t until seven months later while I was attending the Indy 500 that I received a phone call from a young kid who told me that his grandfather had a truck I might want to buy. Excitingly, I started asking questions about the truck, but the kid didn’t have any answers and his grandfather did not speak English. Through his description I was able to figure out it was my old truck and I immediately called my dad and asked him to go get it for me! My dad had just come in from a long day of work and wasn’t sure if he could make it to the bank in time, but luckily for me my mom always stashed cash around the house and this time it was the proverbial ‘rainy day.’ She sent him the money to purchase the truck. I picked it up in 2013 and it has been sitting in my backyard ever since.

“To this day when I see old friends and acquaintances from high school they still ask about my old truck—it was even featured in my high school newspaper, which was a great honor. I am finally in the process of restoring it and doing some of the things I couldn’t do back in high school. I did my research at DuralastParts.com and found all the OE replacement parts I needed to get the truck back on the road, and then purchased everything from my local AutoZone. In the past, I shopped at restoration companies for parts because I was unaware of the vast product line available within a ½ mile of my house. It still astonishes me that you can literally buy all the OE replacement parts, like brakes, steering, and engine components, ‘over the counter’ for a vehicle that’s 50-plus years old!”

As Foss summed up in his F-100 family reunion, it is amazing that you can, in fact, rely on your local AutoZone when it comes to putting old relics as such back on the road. Whether it’s OE-quality (or better) branded Duralast parts and accessories or name-brand components most of us are already familiar with, from the radiator to the tailpipe, headlight to tail light, DuralastParts.com has the goods. Part one of our F-100 revive and drive will prove just that: illustrating just how easy it is to get the F-100’s old reliable V8 up and running. Next month, we’ll focus on rebuilding the 4×4’s “unique” drum brakes front and rear, as well as the suspension components, and get the old high school hauler back on the road once and for all. Stay tuned!  CTP